Right-wing protesters demonstrating near Downing Street handed out flyers today claiming to be in favour of child abuse, pensioners living in poverty and charity corruption.

In a poorly-worded missive entitled ‘UK Yellow Vests and what we stand for’, the author shows a remarkably poor knowledge of the English language.

The top demand was ‘justice for our boys’ followed closely by ‘Brexit‘. However third on the list things they stand for is ‘child abuse’. 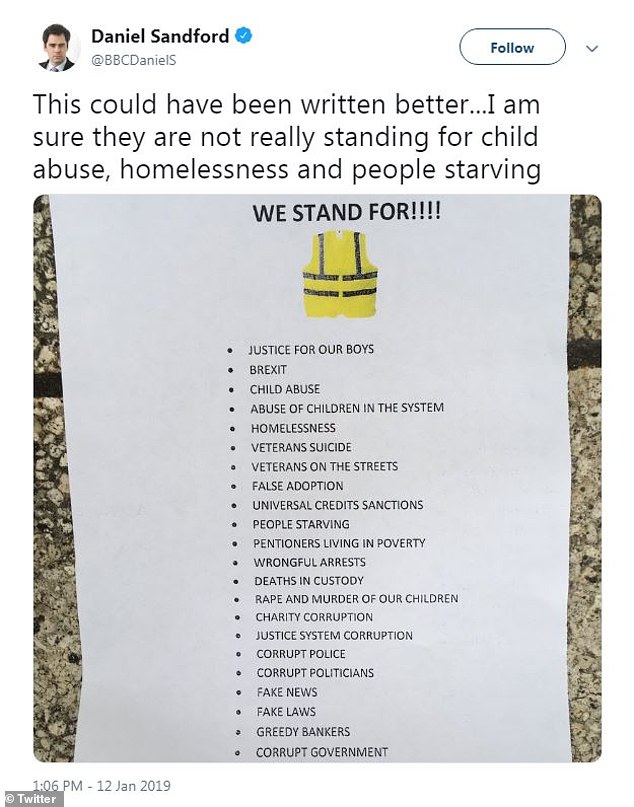 Right wing protesters have been handing out flyers at their ‘yellow vest’ demonstration in London today inadvertently claiming they are in favour of child abuse, corrupt government and people starving

They continue their list of things they support with the ‘abuse of children in the system’, ‘homelessness’ and despite their earlier support for the armed forces, they claim to stand for ‘veterans suicide’ and ‘veterans on the streets’.

Twitter users accused the people behind the flyer of having a poor knowledge of the English language.

Serena Williams is first athlete on America's richest self-made women list
Festive pranksters put red and white Santa hat on Anthony Gormley's Angel Of The North
Ex-BBC war correspondent Martin Bell says corporation 'needs to change and evolve'
SARAH VINE: Designers promised end to thin models but this was the Yves Saint Laurent show yesterday
From 'Greta Thunberg' to 'prorogue': The tricky words tripping up newsreaders
I'm A Celeb: Noel Edmonds larks about by the pool...as he DENIES secret feud with Holly Willoughby
Blueberries can lower the risk of tooth decay as dentists call for the fruit to be used in mouthwash
Former Goldman Sachs trader gives back the $89MILLION accidentally given to him by E-Trade