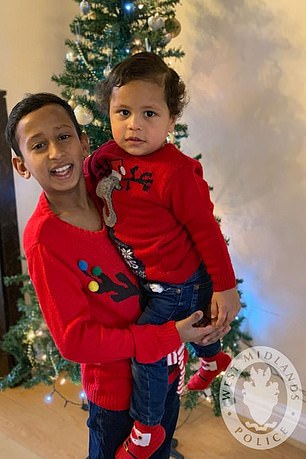 This is the first picture of two brothers who were killed instantly in a ‘street race’ car crash.

Pawanveer, 23 months, and Sanjay Singh, ten, died after the white BMW they were travelling in collided with a blue Audi at a busy junction in Wolverhampton yesterday evening.

Their mother, who was seriously injured in the smash and is still being treated in hospital, was heard screaming ‘my babies, my babies’ in horror as paramedics tried to save her children.

But the 31-year-old Bentley driver arrested on suspicion of killing the brothers allegedly told onlookers he was not to blame for the deaths. He has been released pending further investigation.

The Audi is believed to have been taking part in a street race with a white Bentley Continental when the family’s BMW crashed into it at about 8.45pm yesterday.  The Audi driver fled the scene, but the Bentley driver was arrested.

Pictures from the scene, where Birmingham New Road meets Lawnswood Avenue, show the Audi and BMW severely smashed up with one vehicle’s air bags deployed. 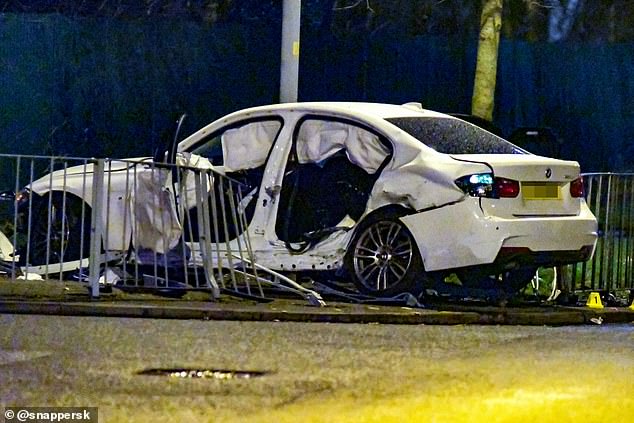 Pictures from the scene of a three-car crash in Wolverhampton last night show a smashed up white BMW, which was carrying two young boys and their mother

The area – which is a hotspot for dangerous driving – was cordoned off by police after the crash and remained shut until 3.40am this morning.

Police and other local authorities have previously appealed to the High Court to get by-laws in place to ban people from taking part in illegal races.

Accident investigators were on the scene overnight, where the blue Audi could be seen with a crumpled front end.

The BMW’s off-side airbags had deployed and the car had stopped in a row of metal barriers at the roadside, while the front of the Bentley appeared to be undamaged.

A nearby resident told the Birmingham Mail: ‘My son went out and could hear someone screaming my ‘babies my babies’.’

Another said: ‘We’ve been here for over 30 years and there’s a lot of accidents. There’s was loads of people and ambulances we had to divert to get home. People were getting off the busses and walking.’ 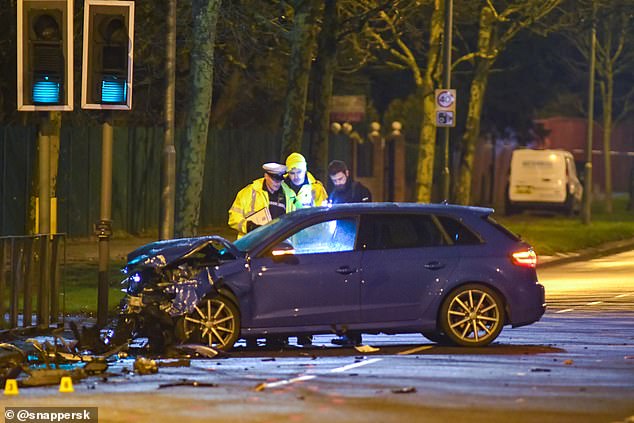 A taxi driver told reporters two cars had passed him at a ‘very, very fast’ speed about a mile away from the accident scene.

Tanveer Hussain then pulled up at the crash site and was able to point out the man alleged to have been driving the Bentley to police officers.

Mr Hussain, 32, who has made a statement to police, told reporters the Bentley driver initially left the scene after passers-by helping the victims accused him of racing with the Audi driver.

Describing how two cars had passed him at speed, Mr Hussain added: ‘I was further up the road, by McDonald’s, and two cars overtook me. If I am doing 35 to 40, they were doing much more.’

Explaining what happened after he heard a bang and then saw the crash site, Mr Hussain added: ‘I got out of my car and other lads tended to the children. What I saw was terrible. It was too much. The mother was just in shock.’ 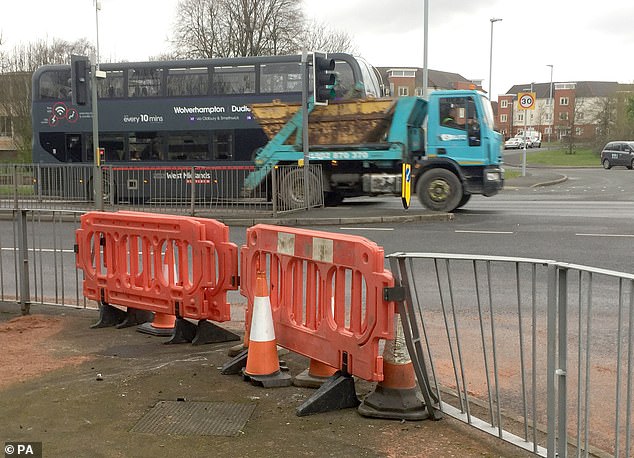 Eyewitness Dudley Hartley said police quickly cleared the area and moved onlookers away – after immediately realising the severity of the children’s injuries.

Mr Hartley, who went outside to see if he could help at the scene, said: ‘It was absolutely shocking. To see something of this nature and then to discover there were two fatalities, both children, is shocking.’

Another resident, whose flat overlooks the dual carriageway leading to the accident scene, said the BMW was hit shortly after his son spotted two cars apparently racing towards the junction.

The resident, who asked not to be named, said: ‘You could see the police officers stopping the traffic were really, really distressed.’

A man who lives near the crash scene told how he heard what sounded like a ‘woman screaming’ several minutes after the impact.

He said: ‘I didn’t see the accident itself but I think it was at about 8.40pm. There were a few cars involved and one car had been pushed through the railings.’

Describing the white BMW, he said: ‘There were car seats in the back. It was completely written off with the airbags deployed.

‘There was a man lying in the road and he looked injured, and I heard a woman screaming about 10 minutes after it had happened. It’s very sad to hear that children have been killed.’

Locals on Facebook expressed their sadness at the tragedy, with one writing: ‘RIP little angels. So sad.’

Another commented: ‘Devastating isn’t it,’ while another wrote ‘I saw the aftermath and it was just terrible.’ 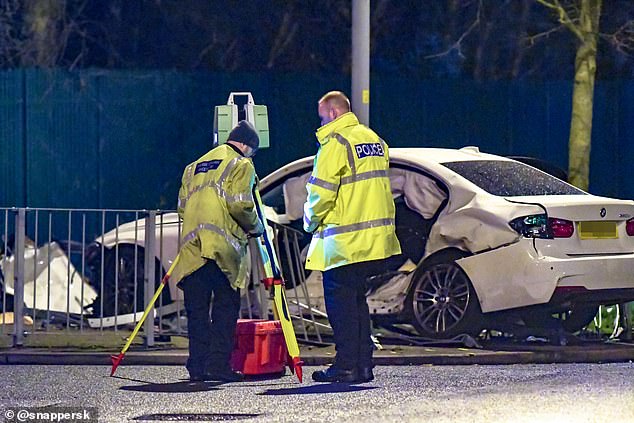 West Midlands Police Detective Sergeant Paul Hughes said: ‘This is an extremely tragic set of circumstances which has left a family totally devastated. Staff from our dedicated family liaison unit are now supporting them.

‘I would appeal directly to the driver of the Audi to make contact with us. You may not be fully aware of the full tragic circumstances but you now need to speak to us.

‘I would also ask the public who have any information or recall seeing a blue Audi S3 and a white Bentley Continental convertible travelling along the Birmingham New Road to make contact.

‘The investigation is in its early stages and I would also ask the public to think about the family at this tragic time and not to speculate on the circumstances surrounding the collision.’

A West Midlands Ambulance Service spokesman added: ‘On arrival ambulance staff found a number of members of the public tending to those involved in the crash.

‘There were three patients who all came from the same car. Unfortunately, it soon became apparent that nothing could be done to save the two young boys who had been badly hurt and they were confirmed dead at the scene.

‘A woman who had been driving the car was assessed and treated at the scene by ambulance staff before being taken to the major trauma centre at Queen Elizabeth Hospital Birmingham. Her injuries are not life threatening. There were no other patients.’

Anyone with information is urged to contact police via Live Chat at west-midlands.police.uk between 8am and midnight or call 101 anytime. Crimestoppers can be called anonymously on 0800 555 111. Quote log number 2580 of March 14.

Would YOU go on holiday with your ex? Gwyneth Paltrow does
University lecturer accused of anti-Semitism and Holocaust denial is sacked
Mel B and Geri Horner REUNITE for first time after their lesbian fling drama
Julian Assange is hit with 18 new charges for conspiring with Chelsea Manning
Bride has her father's ashes glued into her acrylic nails for her wedding day
Mother plans wedding from hospital bed after cancer diagnosis
Emily Maitlis's last-minute Newsnight replacement ignores coverage of her being censured
Chinese city BANS the eating of dogs and cats with new law in the wake of coronavirus pandemic