Two teenage girls have been hailed after they used a lilo to save a father and son from drowning off the coast of Scotland.

Sisters Isla and Eilidh Noble were on the beach at the Waters of Philorth, near Fraserburgh, on Monday afternoon when they spotted the pair in trouble.

The girls, both pupils at nearby Fraserburgh Academy, jumped into action with Isla, 15, heading out on the lilo while her sister, 14, called 999.

They were also helped by passer-by Keith Gray who aided Isla in bringing the lilo back to shore.

The sisters were also praised by the RNLI who said they ‘deserve medals’ for their actions. 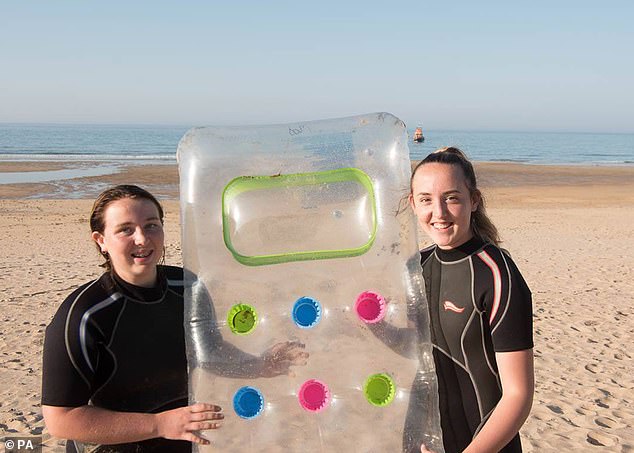 Sisters Isla, right, and Eilidh Noble, left, saved a father and his young son from drowning with their lilo after spotting the pair in trouble in the sea near Fraserburgh in Scotland 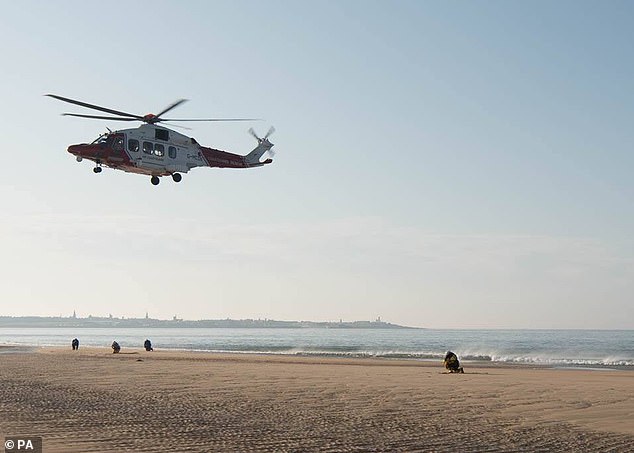 Isla swam out to the distressed pair on the lilo and put the toddler on it while Eilidh swam back and called 999, with a helicopter sent to the beach near Fraserburgh help, pictured 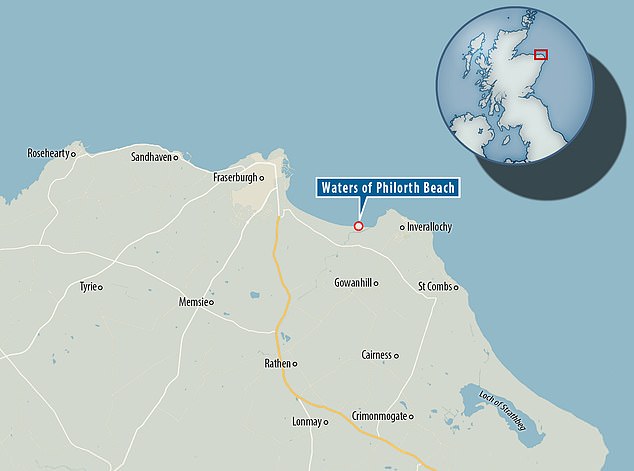 The incident occurred on a beach near the Waters of Philorth, pictured, on the Scottish coast

Speaking today the pair said their parents were proud of their decision making and refusal to panic.

Isla said said: ‘We were just out paddling with our lilo and we saw a man and toddler out, and they were deeper than us.

‘We thought the toddler started screaming but we thought the dad was just dunking him under as a laugh and he was getting cold – but then the dad starting shouting “help”.’

‘I went out with the lilo to go try take him back in while Eilidh went and got the phone that we had in the bag that we had on the beach.

‘We couldn’t stand because we (were) out too deep so I tried to put the toddler on the lilo and then as I pulled the toddler up the dad came up a wee bit as well, so I made sure that his head was out the water.’

Isla added: ‘I tried to swim back in but I could only use one arm because I was holding onto the lilo with the other one. I tried to kick my legs… I was going but I wasn’t going very fast. 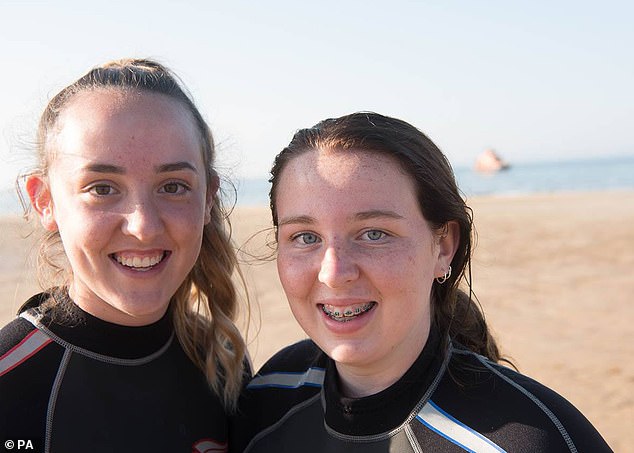 The girls, pictured, said their parents were very proud of their quick-thinking

‘Luckily there was another man, Keith, he had seen what was happening and he was already halfway in the water by this point – so he came and swam out and grabbed the other side of the lilo and we both managed to take them in.’

A nurse, Sophie Ross, had also been walking on the beach when she heard cries for help.

She said: ‘The young lass had pulled the fellow out of the water and he was on the lilo.

‘We put him in the recovery position and got him to cough up some sea water, checked his pulse and breathing and kept the coastguard up to date with his condition until they arrived.’

It is understood the father, who had become unconscious on the beach, was kept in hospital overnight as a precaution. 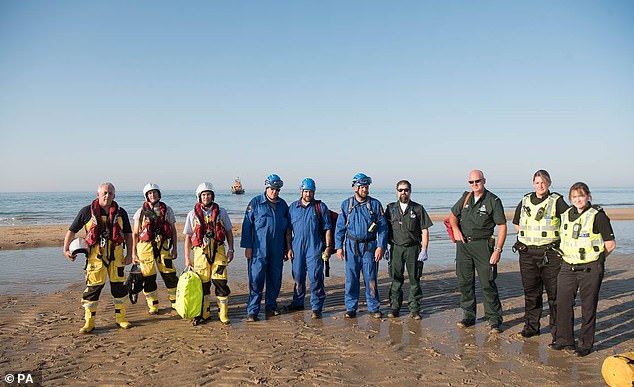 Rescue workers, pictured, also praised the girls and said they ‘deserve a medal’

A post on the RNLI Fraserburgh Lifeboat Facebook page has praised the actions of the girls for starting a rescue effort straight away.

It said: ‘Emergency services arrived quickly and after several minutes the man regained consciousness enough, although still very weak and strapped into his stretcher, to lift his oxygen mask slightly and thank his rescuers before being airlifted to hospital.

‘Once again the dangers of swimming in our seas have been highlighted and we advise everyone to be very careful when having fun at the coast.

‘Isla and Elidh and Keith did brilliant. The girls, for being so young and springing into action and having the presence of mind to phone the coastguard and calmly give them the details of the incident, enabled the emergency services including ourselves to respond and arrive so quickly.

‘Make no mistake their presence and actions today made all the difference. They all deserve medals.’

Martin Lewis CANCELS upcoming TV appearances due to throat ulcer
How the Earl of Yarmouth and his pregnant wife have been evicted from the £85million family seat
Tesla stock rises above $800 AGAIN as China production halted over Coronavirus fears is to resume
Peter Jones 'furious' after Holly Willoughby pulls out of £11million deal
Trump loses ANOTHER general as four-star Marine friend of Mattis resigns
The devastating cost of the bushfires on Kangaroo Island's rare wildlife
U.S. parents claim their kids are developing British accents from watching Peppa Pig
Nicola Surgeon's SNP vote to scrap the pound and bring in new currency for independent Scotland