Another 1,441 cases of Covid-19 have been confirmed in Britain today in the biggest one-day jump in positive tests for two months since 1,514 people were diagnosed on June 14.

Eleven more deaths were confirmed across the UK, none of which were in Scotland or Wales.

Today’s update means more than 1,000 positive tests have been confirmed on five out of the past six days, after Britain had kept the number consistently below four figures since June 26. The rising numbers of positive tests have ignited fears that the virus is rebounding and sliding out of control.

But separate report today produced by SAGE estimates that the R rate of the virus remains stable at between 0.8 and 1.0 for the UK and England overall – meaning it hasn’t changed in the past week. But the South East is now the only region where officials are confident the rate is lower than the dreaded level of one.

SAGE admitted it cannot be sure that R is below one overall because it can only use data from two to three weeks ago, and warned there are ‘early indications’ that the rate of spread is increasing.

However, the group – full name Scientific Advisory Group for Emergencies – maintains that the outbreak is shrinking and cases are falling by between one and four per cent each day.

Separate data this afternoon also tempered fears that new cases of the disease are surging out of control again, as the Office for National Statistics said the outbreak in England has stabilised again after a rise in July.

Concerns of a second major surge had been rising in recent weeks as local lockdowns sprung up in the Midlands and North of England, and Boris Johnson said he must ‘squeeze the brakes’ on easing rules at the end of July.

But today’s weekly estimates are mostly the same as last week except for a slight rise in the estimated daily new cases.

The report published today by the Office for National Statistics (ONS) said there are now around 3,800 people catching the virus each day in the community, and there were an estimated 28,300 people infected at any one time in the first week of August.

It suggests 0.05 per cent of the population of England currently has Covid-19 – around one in every 1,900 people.

The ONS said that while recent figures had suggested the percentage of individuals testing positive for Covid-19 in households in England had risen slightly in July, this trend now appears to have levelled off. 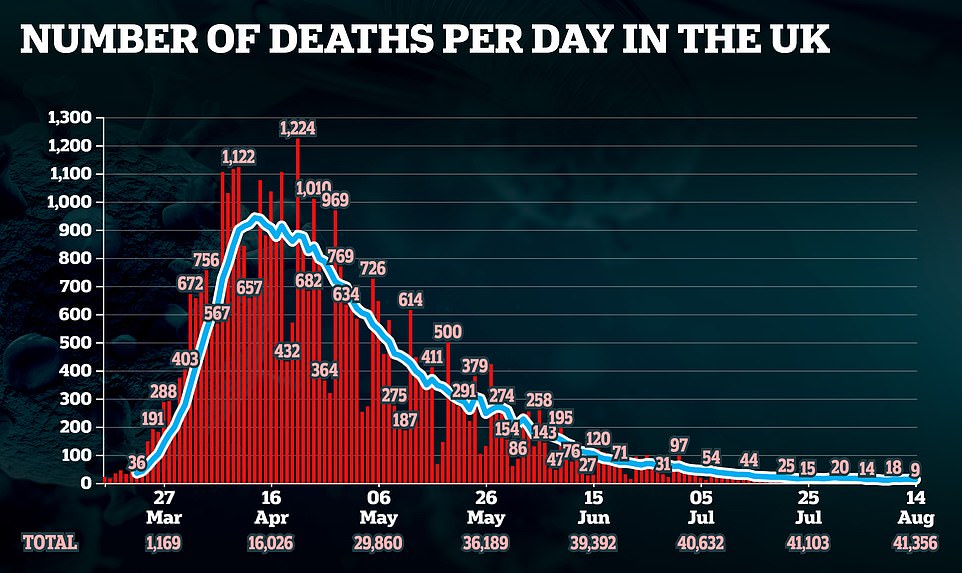 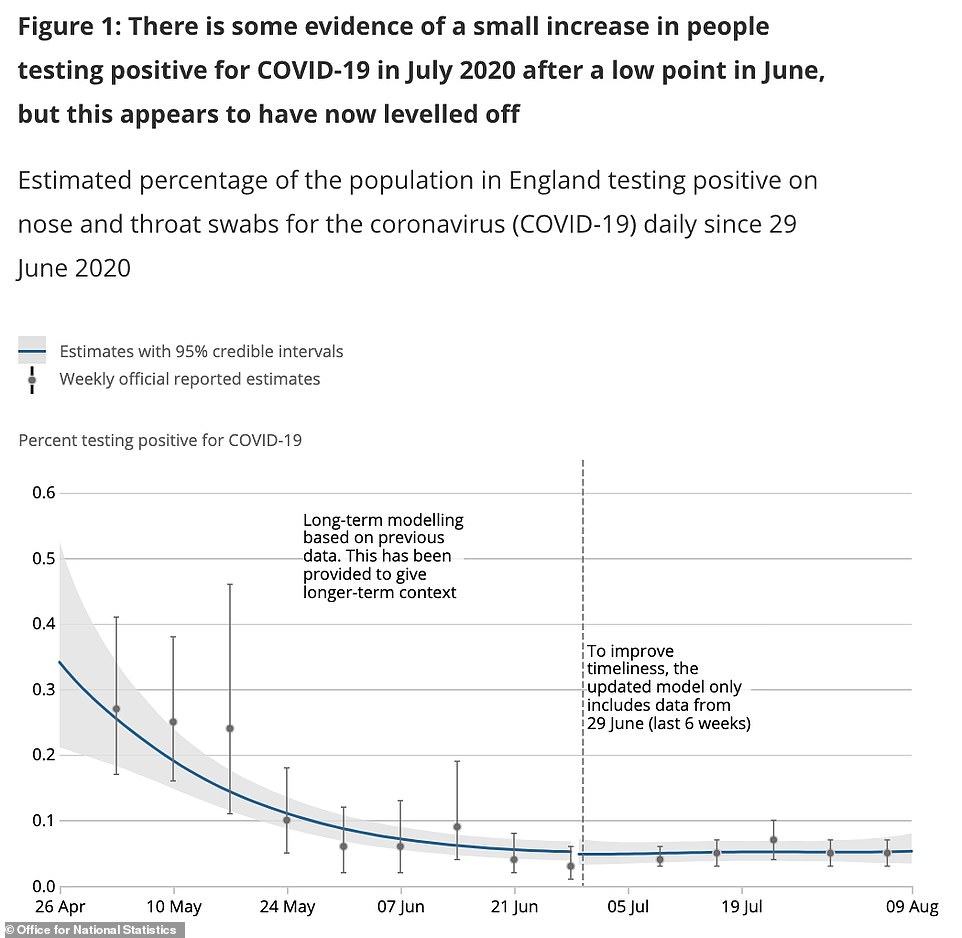 Office for National Statistics data shows that an estimated 0.05 per cent of people in England currently have coronavirus – one in ever 1,900. This is down from a slight rise in July and significantly lower than a peak at the start of the monitoring when more than 0.3 per cent were positive – one in every 333 people

Beauty salons will be able to carry out face treatments such as eyebrow threading and facials from Saturday, the Prime Minister announced last night.

Tattoo studios, spas and barbers across England will also be able to offer all ‘close contact’ services, including eyelash treatments, under new guidance.

In addition, indoor soft play areas, indoor theatres, bowling alleys, skating rinks and casinos will be permitted to reopen from this weekend.

Downing Street also said it will resume plans to pilot a small number of sporting events in order to test the safe return of larger crowds.

Meanwhile, wedding receptions for up to 30 guests will be permitted from tomorrow, but only in the form of a sit-down meal and in a ‘Covid-secure location’.

NHS England said in its daily update that eight more people died with Covid-19 in its hospitals between August 5 and August 13.

The victims were aged between 75 and 90 and four of them were in the East of England, one in the Midlands and three in the North West.

SAGE’s report today – a weekly update of the estimated rate at which the virus is spreading and whether the outbreak is getting bigger or smaller – suggests cases are still declining across the UK overall.

The R rate remains at 0.8 to 1.0, meaning every 10 people with Covid-19 infect between eight and 10 others, and the outbreak is shrinking at between one and four per cent each day.

Regional pictures are more complex and the South East appears to be the only region of England where SAGE is confident the R is lower than one – it is thought to be between 0.8 and 0.9 there.

The highest R is in the North West where it is between 0.9 and 1.1, and every other region is rated 0.8 to 1.0.  SAGE said that the estimates for London, the Midlands, the North East and the South West are unreliable either because there are too few cases or because there are such stark differences across areas within the region.

Growth rates also present a mixed picture across the UK. The outbreak is considered to definitely be shrinking in the East, the Midlands, the South East and the UK as a whole.

But it could be expanding and cases increasing in the North West and South West, officials say, while it is either shrinking or stagnant in London, the Midlands and England overall.

SAGE admitted that the fact its data is old means it cannot be certain that the R is still below one in the UK.

It said: ‘We are starting to see early indications that these values may be increasing. This is not yet fully reflected in these estimates because the data used to calculate R and growth rate reflect the situation from a few weeks ago.

‘It is also important to recognise that these are estimates, and there is a high degree of uncertainty with them.’ 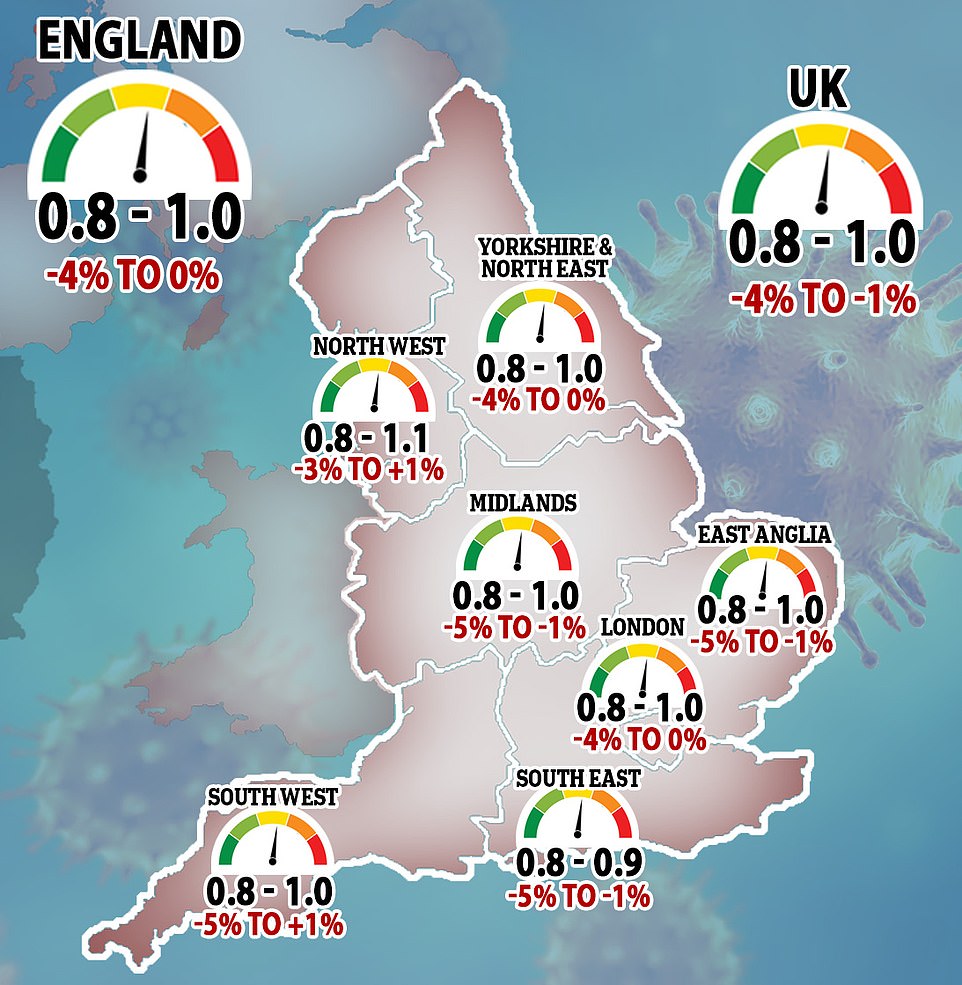 The R rate of the coronavirus and speed of the outbreak shrinking in England and the UK as a whole remain stable, with regional variations which suggest the North West and the South West are the most at-risk regions 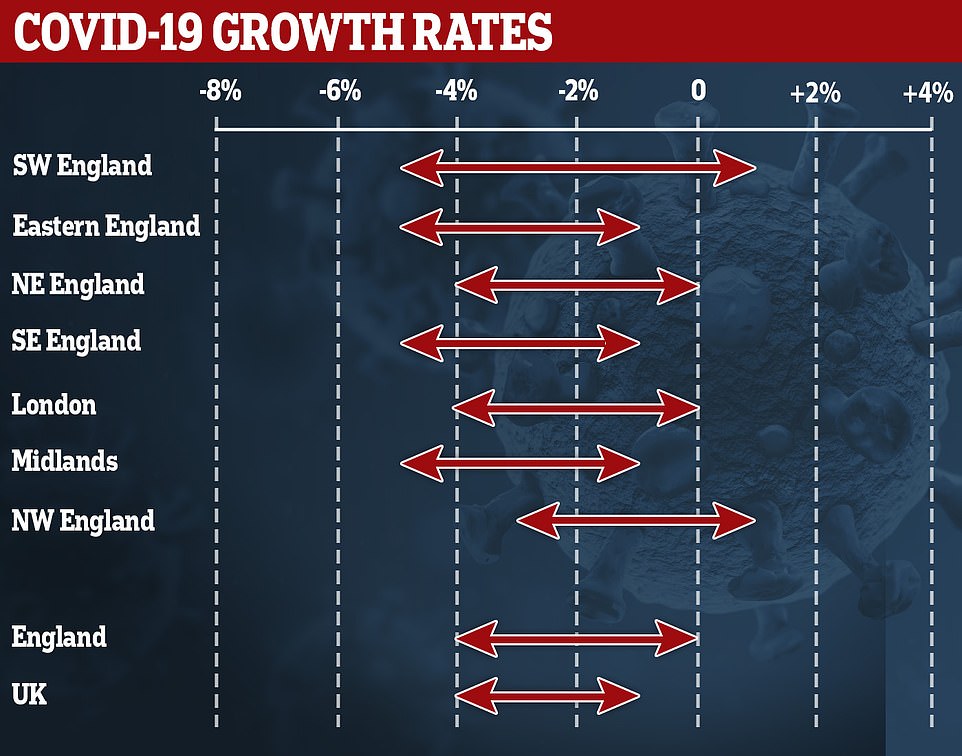 Covid-19 outbreaks may be expanding in the South West and North West of England, figures published by SAGE showed today, but they appear to be shrinking (a growth rate of below 0%) in most regions and the UK and England overall

WHERE ARE ENGLAND’S COVID-19 HOTSPOTS?

Public Health England data up until August 11 shows the infection rates per 100,000 people are highest here:

The ONS report this week used results from 122,021 swab tests taken over six weeks, out of which 58 people tested positive for Covid-19.

People who have coronavirus and are in hospital or care homes are not included in the data.

Lifting lockdown on July 4 – Super Saturday – does not appear to have led to a spike in the numbers of people catching coronavirus, the ONS reports show.

There was a small rise in cases in July – the percentage of people testing positive rose to 0.07 per cent in the week ending July 26 – but this appears to have dropped again.

The percentage has remained below 0.1 per cent – one in every 1,000 people – since May 30, showing there have been no drastic increases.

‘There is evidence that the incidence rate for England has increased in the most recent weeks following a low point in June and appears to have now levelled off,’ the report said.

Official testing figures have been rising this week, with more than 1,000 cases declared on three occasions in four days after the number not being hit since June.

But experts say this is down to better testing which is finding cases more accurately thanks to increased efforts in virus hotspots and looser criteria on who can be tested. Tests still only appear to account for a quarter of the real number of new cases each day.

In Wales the report estimated that 1,500 people had coronavirus at any one time between August 3 and August 9 – one in every 2,100 people. 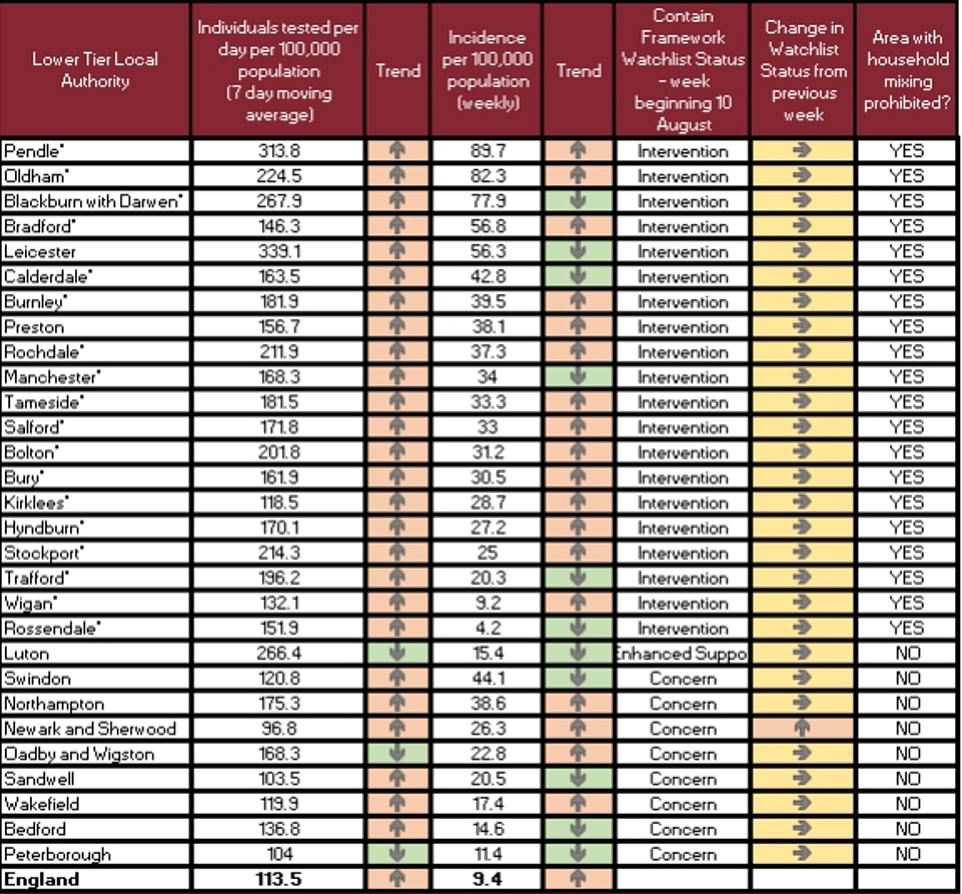 Newark and Sherwood was among 29 areas named on the PHE watchlist, which is updated every Friday. Nine boroughs, including Swindon (44.1) and Northampton (38.6) have yet to be hit by a ban on household gatherings 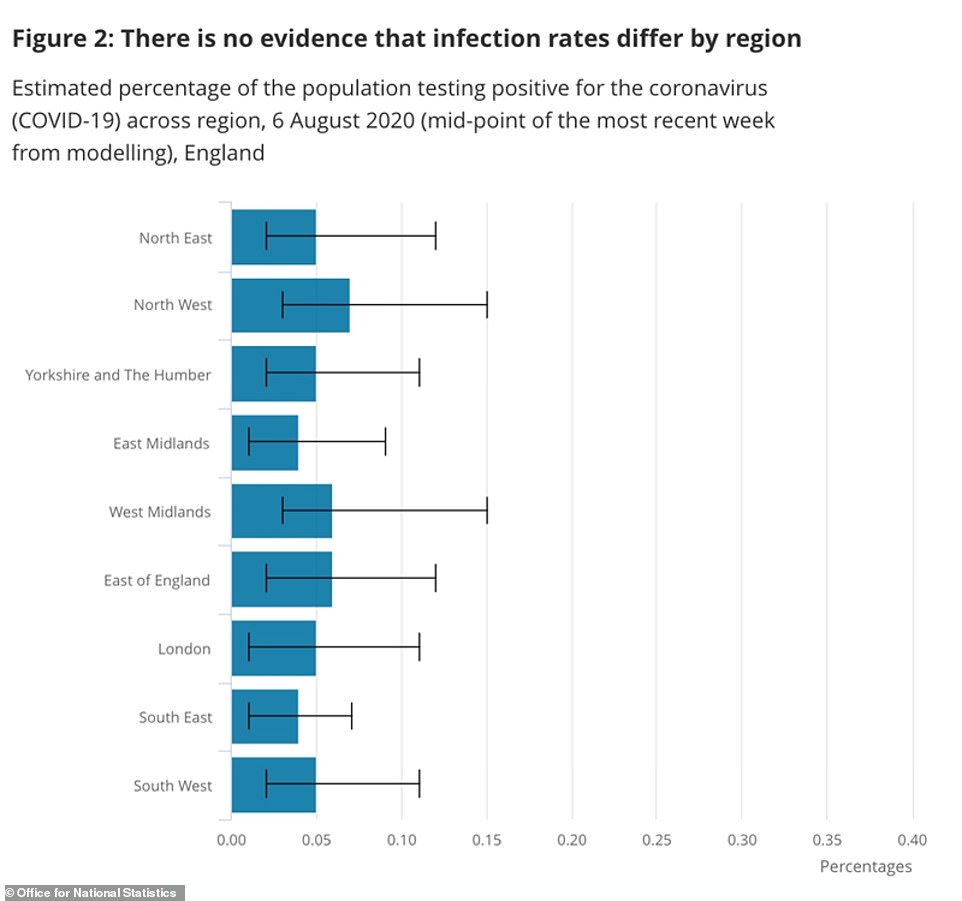 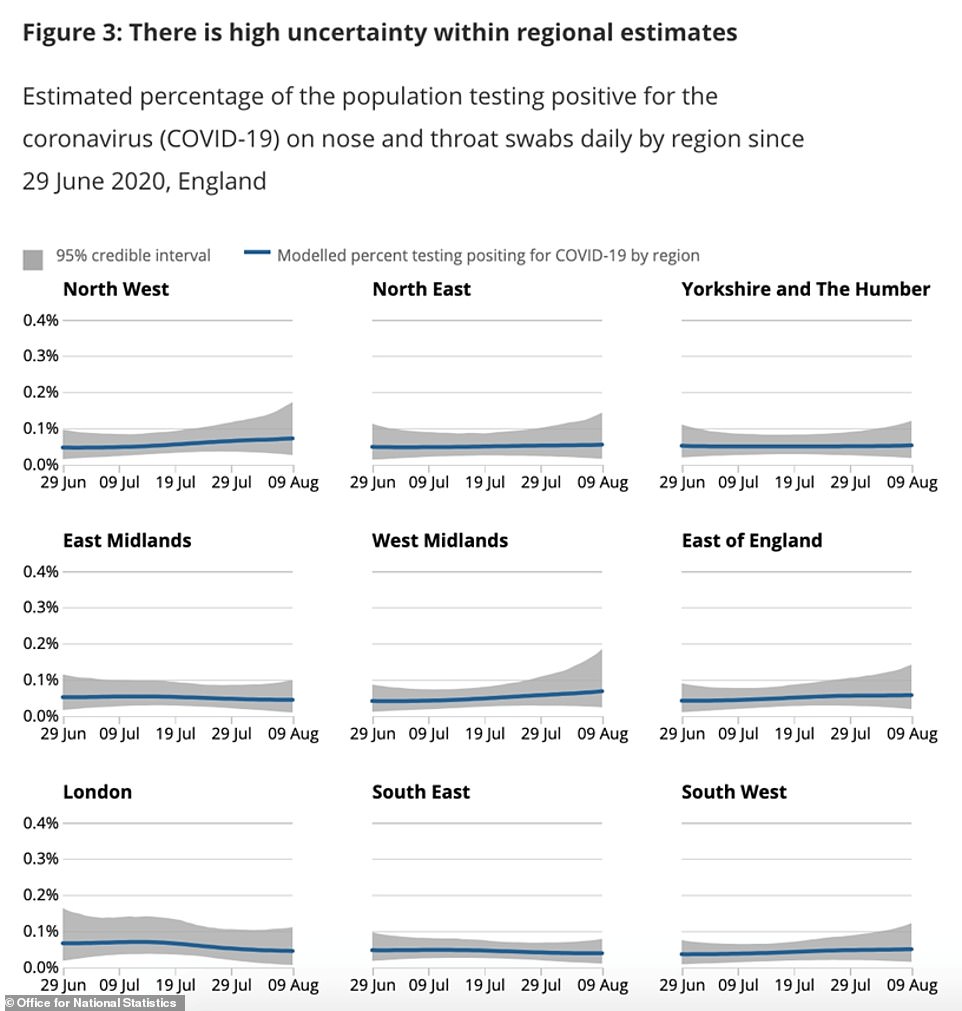 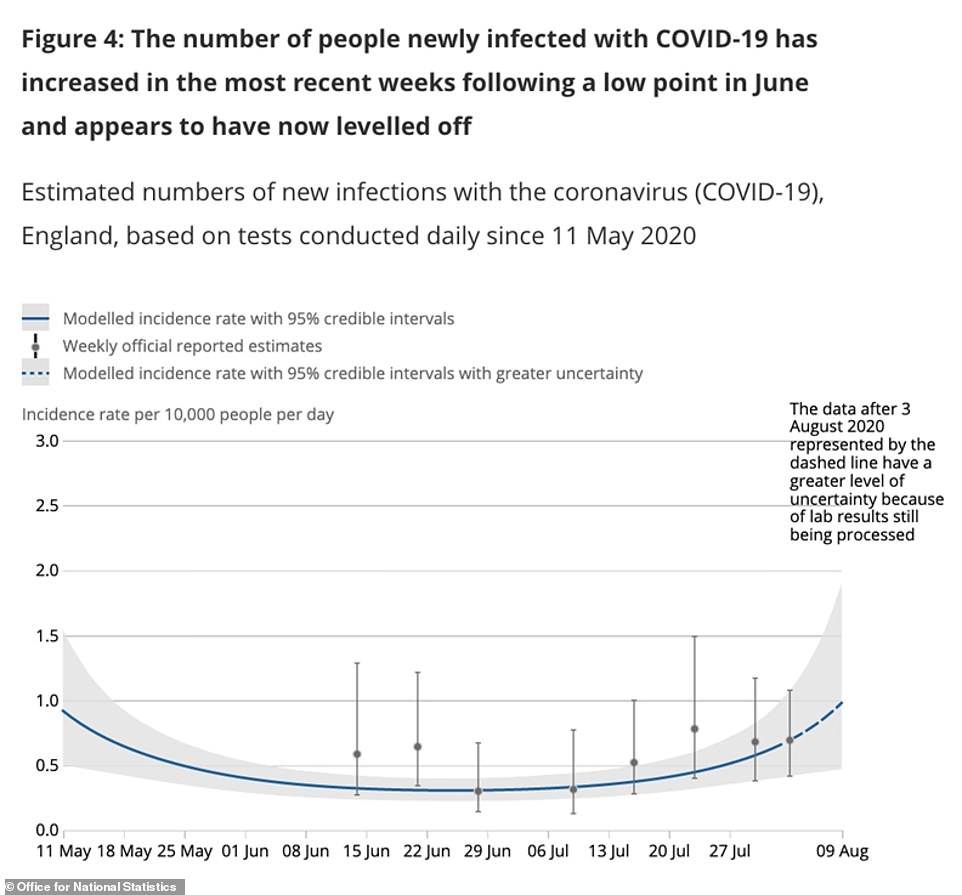 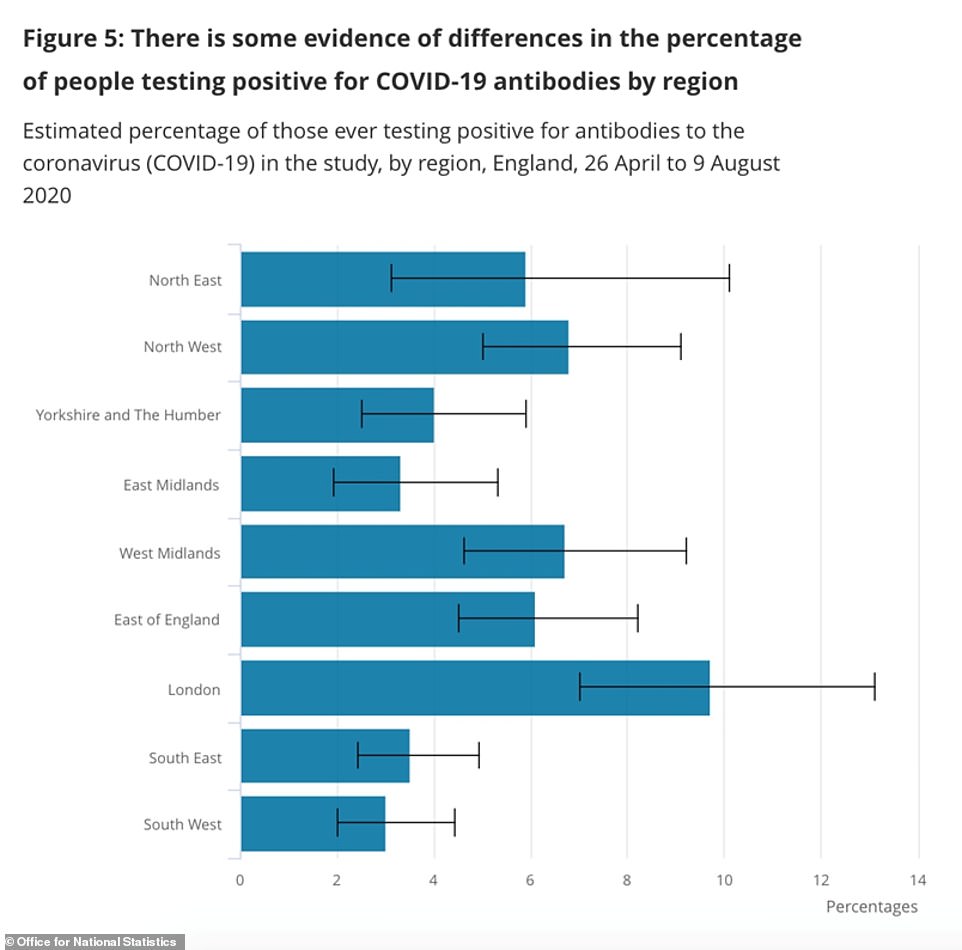 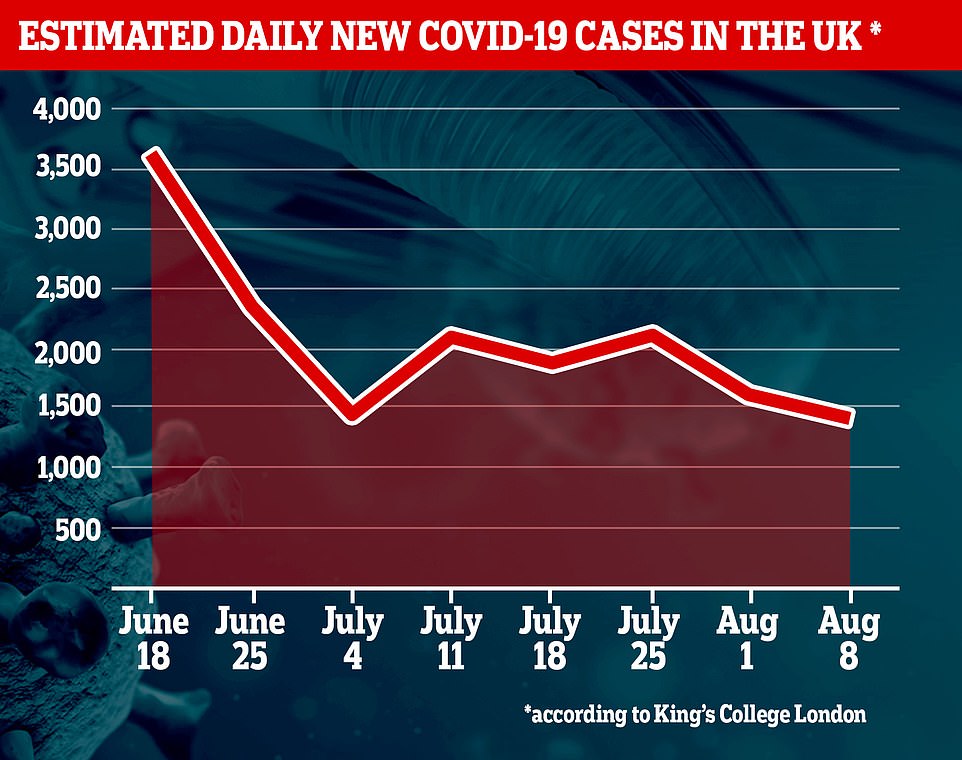 Today’s update comes after researchers yesterday said there is no evidence that England is entering a second wave of coronavirus infections, and that it is in fact still coming to the end of the first wave.

Outbreaks of coughs and chest infections are at their highest levels all year, according to Public Health England figures published today.

The organisation’s weekly Covid-19 report shows there were 47 outbreaks of respiratory infections in workplaces in the week ending August 9.

The illnesses are not explicitly said to be Covid-19 but are characterised by the same symptoms – coughing and breathing problems.

Up until May 3 there had only been one outbreak reported all year – likely because most workplaces were closed during lockdown. But there were none recorded even before lockdown started.

Since that time there have been a total of 340 outbreaks recorded. Each outbreak consists of two or more people with the same symptoms.

A team of scientists at King’s College London, who run the Covid Symptom Tracker mobile app, said cases appear to have actually dipped to their lowest since the beginning of July.

The app estimates cases depending on users reporting their symptoms and positive test results.

It estimates 1,434 people are being infected per day in the UK, according to data in the two weeks up to August 8, which does not include care homes or hospitals.

Across July, the researchers were concerned that Covid-19 cases were possibly rising, or were barely dropping below 2,000 new daily cases.

But now they are at last falling to levels recorded before pubs, restaurants, hairdressers and other venues re-opened on ‘Super Saturday’ – July 4.

In contrast, the government tally shows new cases, confirmed with a lab test, are on the rise. More than 1,000 Britons tested positive for coronavirus yesterday after record low cases in July.

And there are concerns spikes abroad in holiday destinations Spain, France and Greece will soon hit Britain.

In light of increasing cases, scientists have said we must learn to live with Covid-19 and that small surges in cases are to be expected.

The COVID-19 Symptom Study app has now been downloaded by over 3.9million people in the UK who regularly update information about if they have symptoms of have had a Covid-19 test.

The latest figures were based on the data from 10,988 swab tests done between  26 July to 8 August. They estimate that 24,131 people currently have symptomatic Covid-19 in the UK.

They are cautious to make firm conclusions that the outbreak is either growing or shrinking until they are certain.