BRITISH schools have shot up the international league table for reading, maths and science after tougher Chinese style-lessons were introduced.

Boris Johnson hailed the “great progress” and said it was down to Tory reforms to relentlessly drive up standards. 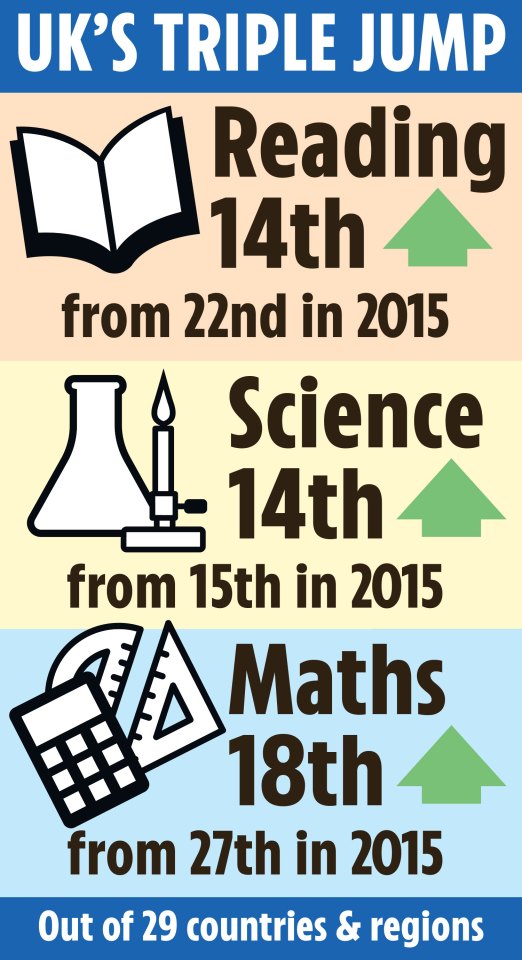 The Pisa tests showed that in maths Britain is now 18th in the world — up from 27th three years ago.

And the UK is ranked 14th for reading and science — up from 22nd and 15th respectively.

The tests, carried out by the Organisation for Economic Co-operation and Development, rank 79 countries and territories.

Andreas Schleicher, the OECD’s education director, said the UK was making “positive” progress. The big leap forward in maths came after Chinese methods of teaching were rolled out in English classrooms.

The south Asian “mastery” approach involves kids being taught as an entire class and learning to master the basics such as their timetables.

Schools Minister Nick Gibb said: “I am quietly confident we will continue to see the UK rocket up the Pisa league in years to come.”

Man held for murder of boy, 12, after school hit-and-run found asleep in car

China again topped the charts for maths, followed by Singapore and the Chinese territories of Macau and Hong Kong.

Mr Schleicher warned it would take a “very long time” for the UK to catch up with the highest achieving countries at its current rate of progress.

And while Britain nudged up one place in science, the nation’s overall score in the subject continued its downward trend from 515 Pisa points in 2006 to 505 points in 2018.