It’s hard to imagine that just a fortnight ago, snow and ice had much of Britain trapped in a mid-winter big freeze.

But that was all forgotten today as people headed to the seaside for a romantic day out, with milder air originating from the Azores leaving the country basking in unseasonably mild highs of 15C (59F) on Valentine’s Day.

Some Britons jumped in the water in Bournemouth, while others enjoyed sitting in the sunshine in Portsmouth – only hours after a very misty start led the Met Office to issue a weather warning for fog in southern England. 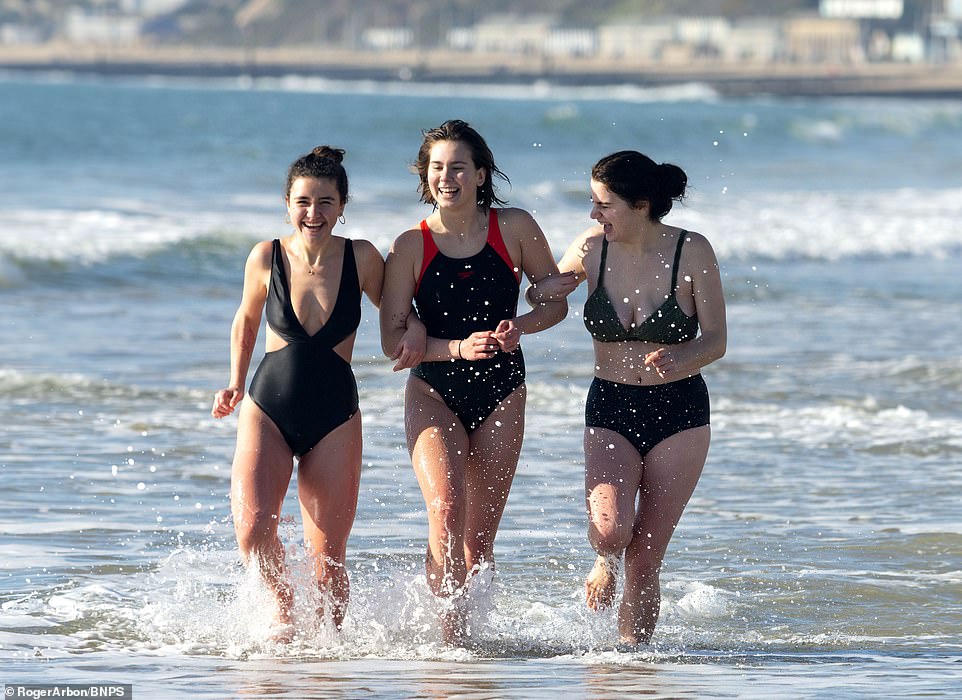 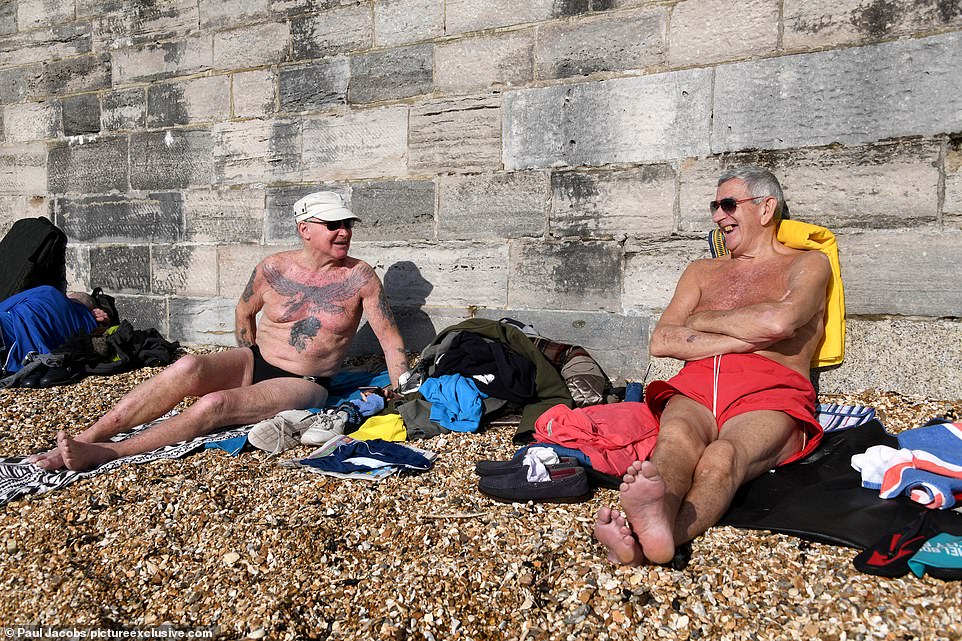 Two men make the most of the warm weather on the beach this afternoon at the Hot Walls in Old Portsmouth, Hampshire 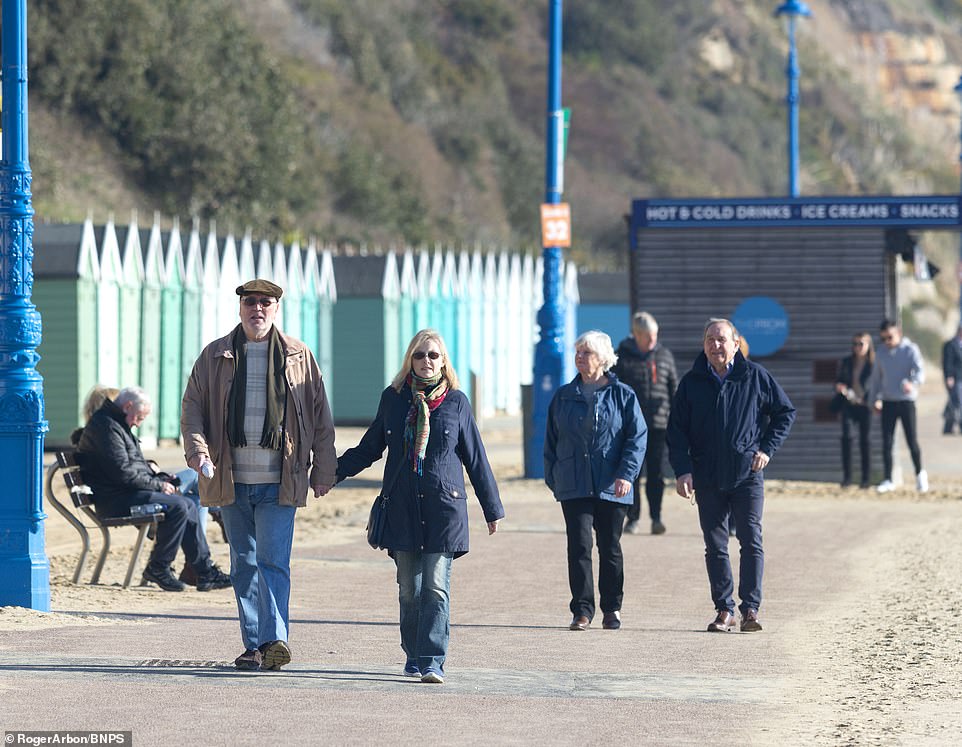 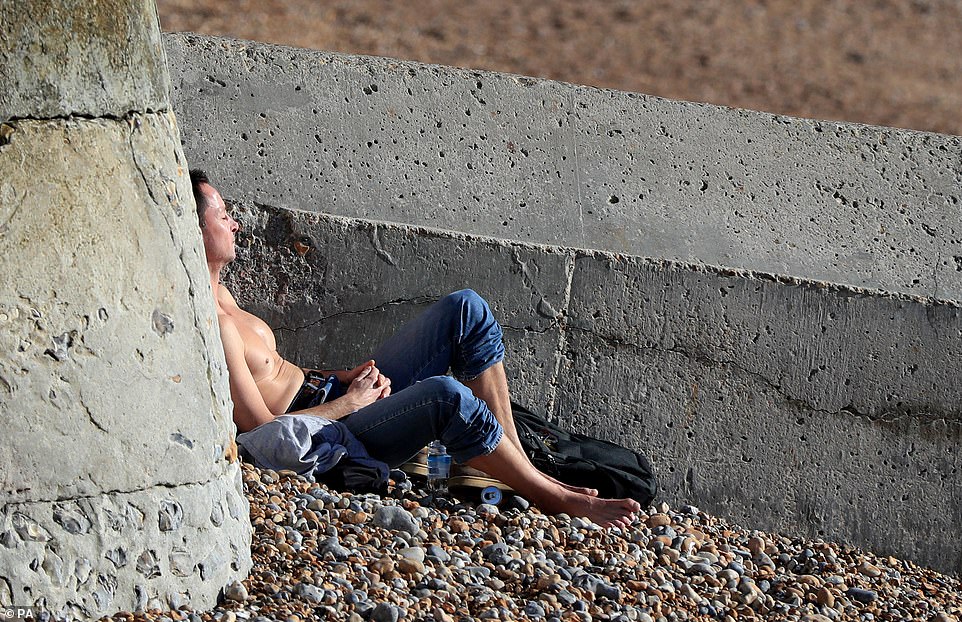 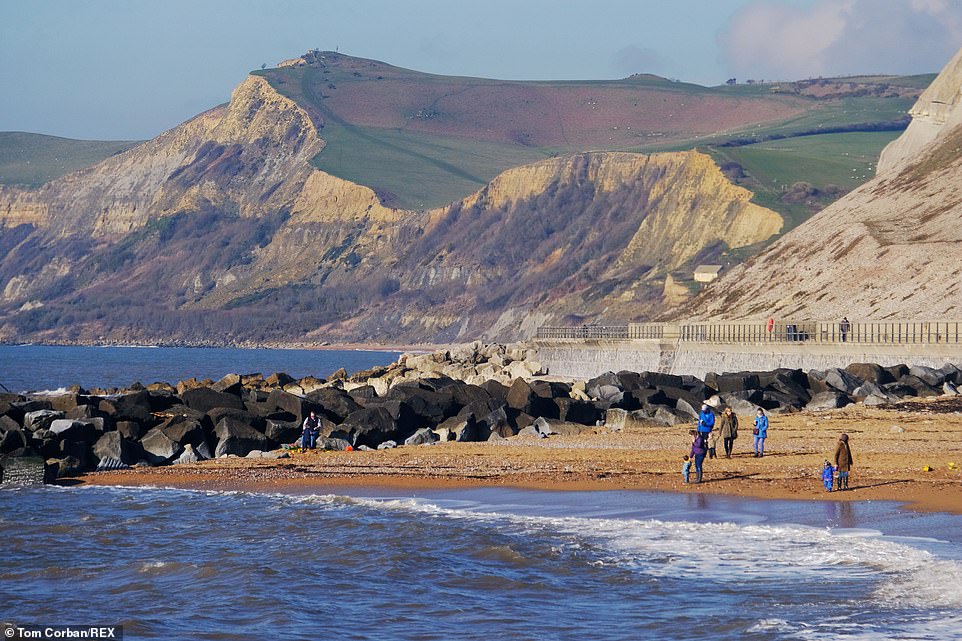 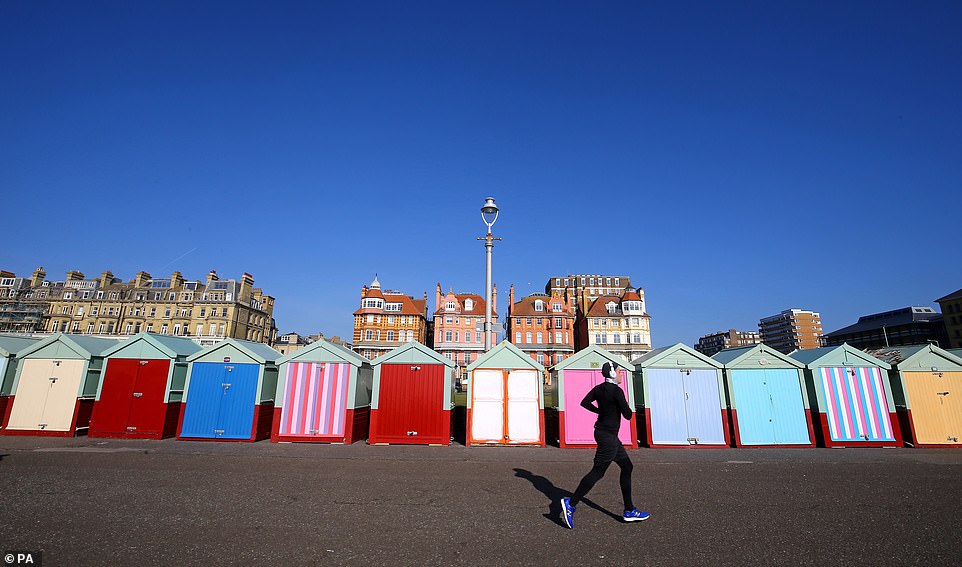 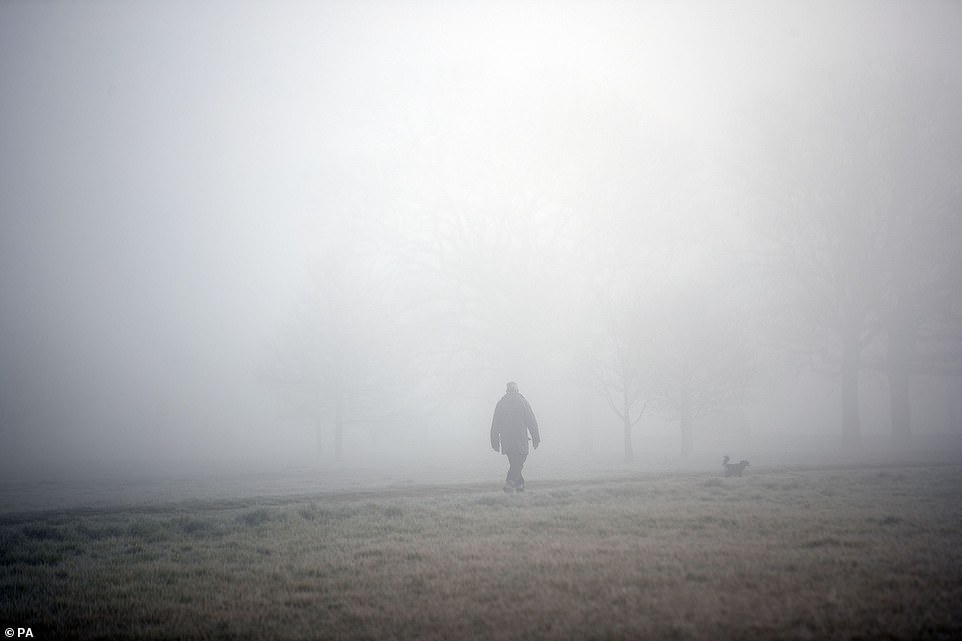 A man walks his dog in the frost and fog of Windsor Great Park in Berkshire this morning, which later cleared for a sunny day

Temperatures will stay well above average for the time of year over the coming days, with forecasters expecting an almost summer-like peak of up to 16C (61F) in the North East of Scotland and 13C (55F) in northern England.

Ther mercury in London is likely to reach 15C (59F) tomorrow – with a fortnight still to go until meteorological spring. And although some snow could return briefly next month, the milder conditions should stay for a while.

‘At the moment we can expect to see temperatures reach well into double figures across the UK,’ he said. The warmer conditions are due to a high pressure system moving up from South West Europe.

Today and tomorrow should bring the highest temperatures, said Mr Madge. Northern England, the Peak District and coastal Yorkshire are expected to see the warmest weather, apart from North-East Scotland. 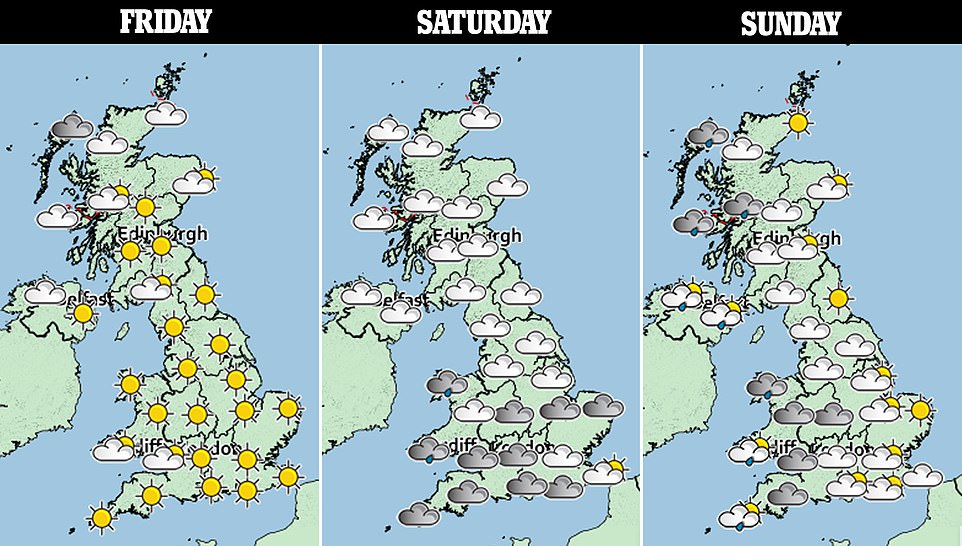 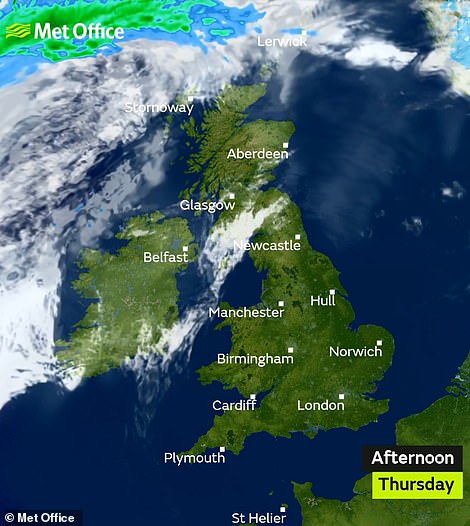 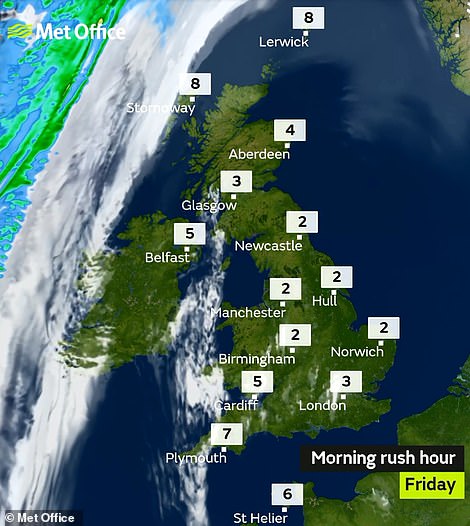 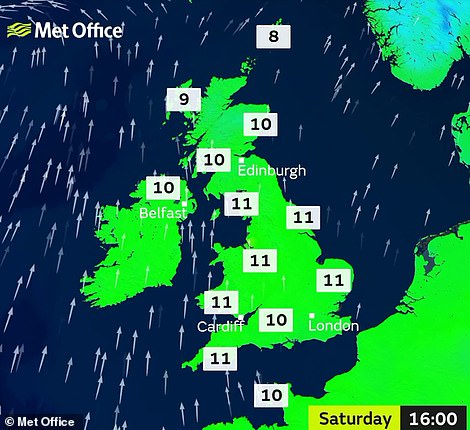 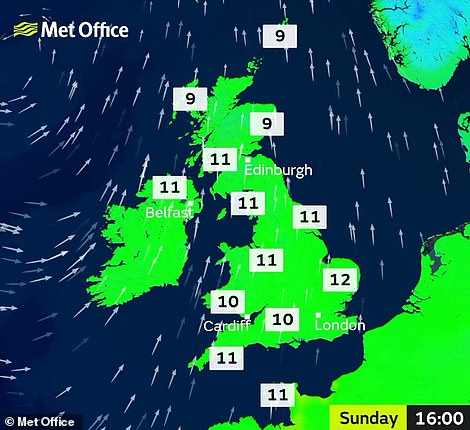 Above average temperatures are expected for all of Britain this weekend, with many places enjoying 11C or 12C around 4pm

The warmest Valentine’s Day on record was in 1998, where temperatures hit 19.5C (67.1F) in Cambridge, not far off the February record temperature of 19.7C (67.46F) set in the same year at Greenwich in South East London.

Last year, there was also a very mild spell around the middle of the month, with 14.2C (57.6F) recorded on February 19 in Cardiff, but days later the Beast from the East brought freezing conditions and heavy snowfall.

The Met Office long-range forecast predicts during the first two weeks of March there is the ‘potential for some snow’ although ‘overall temperatures are likely to be near or slightly above average’.

Mr Madge added: ‘There isn’t any strong signal for an extended cold spell at all. The high pressure looks as if it will remain in charge for most of February if not all of the month and so average or warmer than average conditions are likely to prevail.’