The leader of one of the country’s foremost trade unions has risked igniting further accusations of anti-Semitism within the Labour party by reportedly hinting Israel created the issue to mask its own ‘atrocities’.

Mark Serwotka, general secretary of the Public and Commercial Services union (PCS) which represents around 200,000 members, is said to have made the comments during a fringe meeting at the Trades Union Congress conference in Manchester this week.

Audio footage broadcast on The Independent website, attributed to Mr Serwotka, cited Donald Trump’s decision to shift the US embassy from Tel Aviv to Jerusalem – a deeply divisive move that broke with a decades-old international position and triggered furious protests. 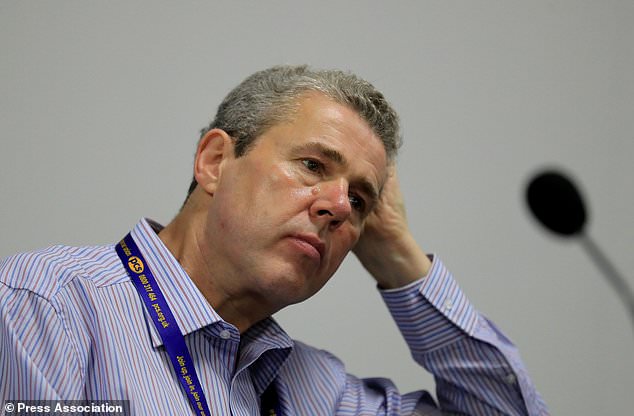 Mark Serwotka is the general secretary of the Public and Commercial Services union which represents around 200,000 members (Gareth Fuller/PA)

Mr Serwotka also allegedly cited the bloody deaths of unarmed Palestinians at the hands of the Israeli military as among the real issues being distracted from by accusations of anti-Semitism.

He is alleged to have said: ‘I’m not a conspiracy theorist, but I’ll tell you what – one of the best forms of trying to hide from the atrocities that you are committing is to go on the offensive and actually create a story that does not exist for people on this platform, the trade union movement or, I have to say, for the leader of the Labour Party.’

A PCS spokesman said: ‘Mark spoke at a Palestine Solidarity Campaign fringe event at the TUC – an organisation PCS is affiliated to.

‘He made the point at the start of the meeting that we need to oppose anti-Semitism in society and within the labour movement.

‘But we should not allow the issue of anti-Semitism to be used by people who are attempting to silence Palestinian voices as they legitimately struggle for their rights and a sovereign state.’

The comments come at the end of a summer dominated by accusations of anti-Semitism within Labour, with former prominent frontbencher Chuka Umunna branding the party ‘institutionally racist’ at the weekend over its handling of the anti-Semitism row. 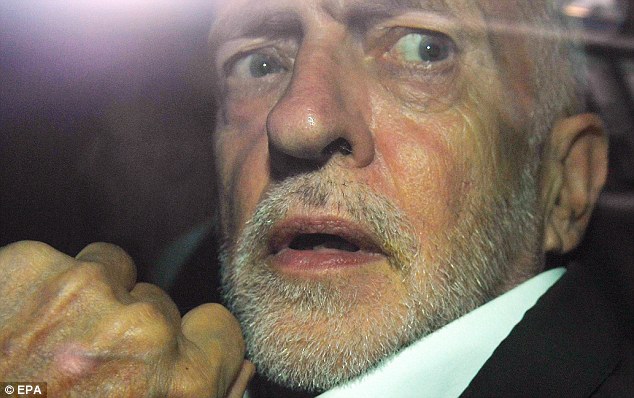 Chuka Umunna branded the Labour party ‘institutionally racist’ at the weekend over its handling of the anti-Semitism row. Pictured: Labour leader Jeremy Corbyn

The anti-Semitism scandal has dogged Labour since Jeremy Corbyn was elected leader in 2015.

Here is a timeline of the controversies:

Labour MP Naz Shah is suspended for anti-Semitic posts – including one in which she appeared to endorse calls for Israelis to be deported to the US.

She apologised and was given a formal warning.

Ken Livingstone goes on the radio to defend Ms Shah – but sparks fresh controversy by claiming that Hitler supported Zionism.

He is suspended by Labour but refuses to apologise and has repeated the claim many times.

A two-month inquiry by civil liberties campaigner Shami Chakrabarti finds that Labour is not overrun by anti-Semitism.

But the launch is overshadowed when Jewish Labour MP Ruth Smeeth flees it in tears after being accused by Corbyn supporter Marc Wadsworth of colluding with the press.

Critics accuse the report of being a whitewash and Ms Chakrabarti is widely criticised for accepting a peerage from Jeremy Corbyn shortly afterwards.

The Home Affairs Select Committee says Labour is guilty of incompetence over its handling of anti-Semitism and of creating a safe space for people with ‘vile attitudes towards Jewish people’.

It is revealed that Jeremy Corbyn defended an artist who painted an anti-Semitic mural and said the offensive art should be removed.

He apologises saying he did not properly look at the picture before he made the post.

Marc Wadsworth is expelled from Labour after being accused of anti-Semitism.

Meanwhile, Labour Jewish MPs tell of the anti-Semitic abuse they have suffered in a powerful parliamentary debate – and round on their leader for failing to tackle it.

In an angry diatribe at a meeting of Labour’s ruling executive committee, he said he was ‘amazed’ there was evidence party members hated Jews.

He claimed ‘some of these people in the Jewish community support Trump – they are Trump fanatics’ before shouting: ‘So I am not going to be lectured to by Trump fanatics making up duff information without any evidence at all.’

Jeremy Corbyn issues a video insisting he is committed to tackling the racism – but it is panned by Jewish leaders.

Corbynistas mount a social media campaign to get deputy Labour leader Tom Watson to quit after he criticises the party’s handling of anti-Semitism.

The Daily Mail exclusively publishes photos of Jeremy Corbyn holding a wreath at a ceremony where a terrorist linked to the Munich massacre was honoured.

The Labour leader insists he was there to honour others killed – but faces fresh calls to quit over the scandal.