The industrial action – which comes amid the bitter dispute over guards on trains – will affect services in and out of Britain’s busiest station, London Waterloo. 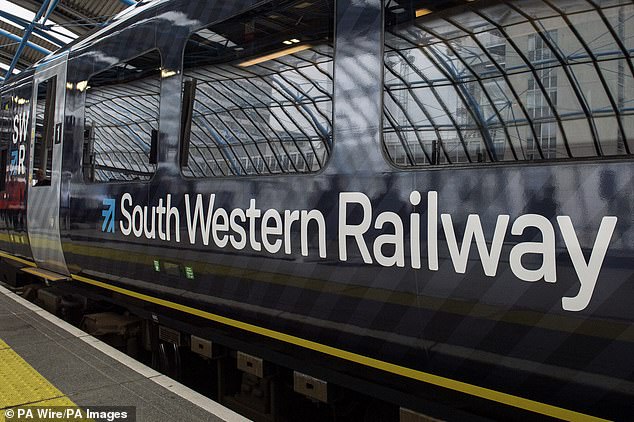 Workers on South Western Railway are to stage two fresh strikes, on December 27 and 3

Services to and from the station have been hit by a series of problems in recent months. On Tuesday a signal failure at Woking brought yet more cancellations.

SWR – which has been hit by delays in autumn and winter because of signal and train failures – runs services into Waterloo, which handles 270,000 journeys a day.

Senior managers from Network Rail and SWR will be at Waterloo station concourse this afternoon and evening from 4pm to 7.30pm to answer commuters’ questions.

News of the latest strike action comes days after RMT members on SWR said they will walk out on December 22, causing further travel misery for festive shoppers.

The strike is part of the long-running dispute over guards on trains, which the union says is about ‘safety, security and access’ – but SWR has billed it ‘totally unnecessary’.

RMT general secretary Mick Cash said today: ‘This latest phase of action in the long-running dispute on South Western Railway comes solely as a result of the companies intransigence when it comes to reaching a negotiated settlement that would underpin the guard guarantee on their trains.

‘South Western Railway stubbornly refuse to make any progress at all in resolving this dispute, which is about safety, security and access on South Western Railway. The company are hell bent on opening up a loophole that would allow them to run services driver only at their discretion.

‘Recent figures have shown a shocking surge in violence on our railways across the festive season and it is frankly appalling that South Western Railway are looking for a green light to throw the guard off their trains as and when they see fit in the name of profit.

‘SWR might think it’s acceptable to play fast and loose with passenger safety, security and access but RMT members, who have stood firm throughout this dispute despite appalling harassment from the company, will not accept a dilution of the safety regime on the railway.

When will the fresh strikes take place?

RMT members on South Western Railway working as commercial guards, guards and train drivers have been told not to book on for any shifts that start between:

‘There’s a simple solution to ‎this dispute and it means SWR stop playing with words and negotiate the guard guarantee that reflects the safety values of the agreements RMT has pinned down in other parts of the rail industry. RMT remains available for genuine and meaningful talks.’

SWR says it has ‘guaranteed to roster a guard on every train, and we need more, not fewer guards – 70 more by May 2019 – and we have an opportunity with the introduction of the new suburban trains to operate these trains differently to maximise the customer benefits’.

It adds: ‘The number of crimes on the SWR network has reduced by nearly 6 per cent since April. SWR’s team of 35 rail community officers work on trains and at stations to prevent and detect crimes.

‘They work closely with BTP officers to help reduce incidents on the network, engaging with customers and highlighting suspicious activity.’

At least 15 dead when jet with 100 people on board crashes after takeoff in Kazakhstan
Several people are hurt as a TORNADO tears through holiday island of Ibiza
UK weather: Britain is set for unseasonably hot weekend
Pochettino: Harry Winks can be England's answer to Xavi or Andreas Iniesta
Sheridan Smith goes retro with victory rolls at D-Day celebrations in Portsmouth
Hunt for missing boy, six, who fell in River Stour on 'family fishing trip' goes into a second day
DEBORAH ROSS reviews the first episode as the award winning drama Killing Eve returns
Tommy Robinson attacked by a milkshake in Warrington