Union leaders have pledged marches to force a general election ‘as soon as possible’ – even though it is Jeremy Corbyn who is standing in the way of one.

Left-wing union bosses gathered at the Trades Union Congress in Brighton, where they spoke out in favour of an election now rather than Labour’s policy of a delay.

And they warned Mr Corbyn not to sign up for a national unity government to block a No Deal Brexit headed by a politician like ex-Tory chancellor Ken Clarke. 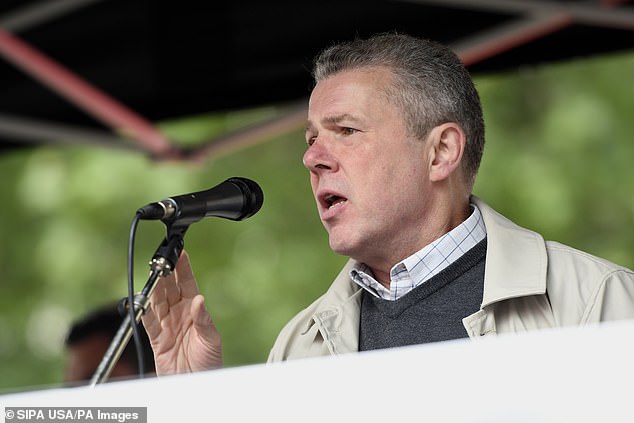 Boris Johnson offered the Labour leader the chance to vote for an election last Wednesday – an opportunity he did not take up.

And Mr Corbyn is set to vote against an election again today.

He has agreed with opposition parties, such as the Liberal Democrats, not to go for a national poll before it is absolutely certain that the Prime Minister is tied into delaying Brexit by a further three months.

Yesterday Mark Serwotka, the general secretary of the PCS union, which represents civil servants, called for a national demonstration to force an election.

Mr Serwotka, who is TUC president this year, told the conference floor: ‘Let the cry go out: we have no confidence in this rotten government and we want a general election on our terms now.

‘We will mobilise to campaign for one and this should include organising a massive national demonstration.’

He spoke just hours after John McDonnell, the shadow chancellor, told BBC One’s Andrew Marr Show that he did not want an election now.

‘I want an election, I want it as soon as we possibly can and sometimes you do have to put your country before party,’ he said. ‘We’ve got to prevent Boris Johnson from forcing through a No Deal because of the damage it could do for our country.’

Speaker after speaker demanded an election at yesterday’s rally of the National Shop Stewards Network, a left-wing group of trade unionists.

Howard Beckett, the assistant general secretary of Unite, said he was sick of hearing about Brexit and that the priority was getting Labour in power to push the agenda on workers’ rights.

Fran Heathcote, president of the PCS union, said: ‘We will call on the TUC to organise a demonstration to demand a general election if one isn’t forthcoming.

‘We want an election as soon as possible and we will oppose a national unity government, the main purpose of which would be to prevent a Corbyn- led government.’ Dave Ward, general secretary of the CWU, which represents post office workers, said: ‘I want us trade unionists to be in towns and cities, where Boris Johnson is going to try to create his new army over one issue – Brexit.

‘I want trade unionists going out on the streets to tell him we have a different agenda. We’ve got to defeat Boris Johnson at that election.’

Mr Ward called for a day of ‘direct action’ on May 1 next year to ensure whatever government is in power adheres to union wishes on workers’ rights.

But Frances O’Grady, the moderate general secretary of the TUC, urged Labour MPs to ‘hold their nerve’ and not have an election until after October 31.

‘My advice to MPs is this: when you’ve got your opponent on the ropes – don’t let them off. Hold your nerve until October 31 and call Boris Johnson’s bluff.

‘So once we have that extension locked down, then let’s have a general election on our terms – not his.’

Recovered coronavirus patients ARE showing signs of immunity, experts say
Patient is woken half-way through brain surgery and ordered to play the VIOLIN as surgeons operate
Women are being put off smear tests by 'shame' over HPV virus
ALISON BOSHOFF reveals why Barbra Streisand's adorably fluffy pooches are the diva dogs to die for
Police find remains of father-of-one after massive search
JAMES KIRKUP: Is Britain FINALLY coming to its senses over transgender madness?
England's legendary goalkeeper Peter Shilton reveals he blew thousands of pounds gambling
Thousands of homeless children are living in shipping containers