A man is believed to have shot dead his mother and father and four other people in a town in southwest Germany on Friday, police said, leaving two others seriously wounded.

The 26-year-old suspect ‘called the police station in Aalen at 12:48 pm (1148 GMT) to inform them he had shot several people,’ police chief Reiner Moeller told reporters in a press conference hours after the killings in Rot am See, near Baden-Wuerttemberg state capital Stuttgart.

The young man stayed on the line, and when the first officers arrived minutes later at the hotel where the shooting took place, they immediately arrested him outside. 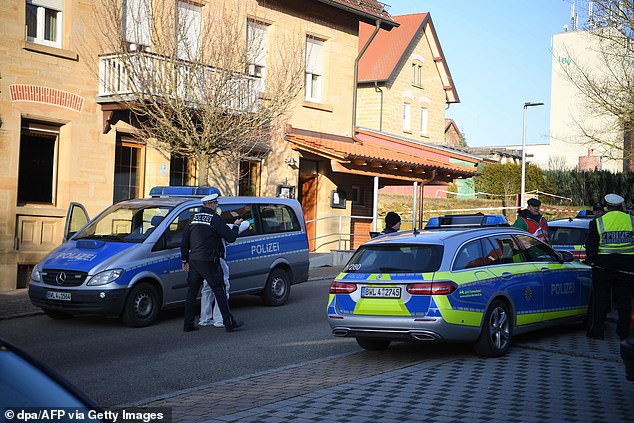 Police swoop in on the area in the southwestern German town of Rot am See, Baden-Wuerttemberg, where six are believed to have been shot dead

Police kept him on the phone while heavily armed cops were scrambled to the scene and detained him shortly before 1pm.

‘They were then able to identify six dead people both inside and behind the building,’ Moeller said, including three men aged 36, 65 and 69 and three women aged 36, 56 and 62.

Images from the scene showed large numbers of emergency vehicles and heavily armed officers sealing off the area with red and white police tape. 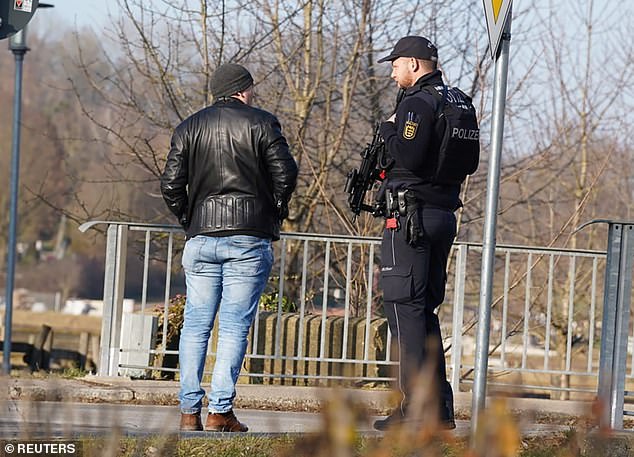 The shooter opened fire at the building shortly after midday in the southwestern town of Rot am See, Baden-Wuerttemberg, 105 miles northwest of Munich. Heavily armed cops (pictured) descended on the scene today 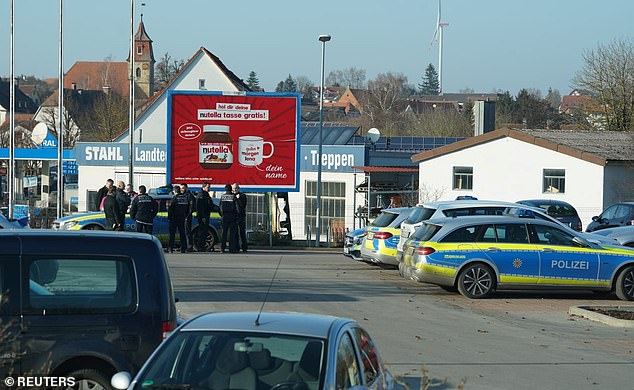 Two survivors of the attack are receiving medical treatment, with one of them ‘in danger for his life,’ police chief Moeller said.

The shooter had also threatened two children aged 12 and 14, leaving them shaken but unharmed.

Investigators have so far been unable to discover anything about the motive of the suspect, saying he would be questioned only when his lawyer arrived at the police station.

So far the police have been able to confirm only that two of the dead were the suspect’s father and mother.

‘We are still clarifying the other relationships’ between the group, Moeller said.

Two people were also confirmed injured by police, who downgraded the number of non-fatal casualties from ‘several’.

Police found the six dead bodies sprawled in and behind the hotel.

Spokesman Rudolf Biehlmaier said: ‘According to my information, there were six dead and several injured.

‘We are working on the assumption that this was a single attacker. In any case, we have no information on further suspects.’

Pictures from the scene show a large police presence in what appears to be a residential neighbourhood.

The perpetrator himself, a German citizen, lived in the hotel along with some of the victims, near the station in the town of 5,200 people. 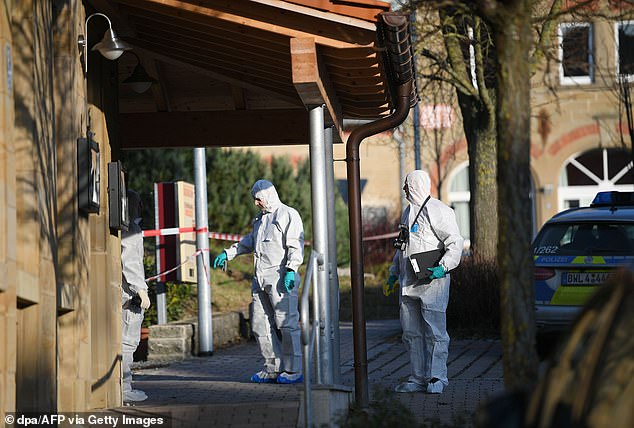 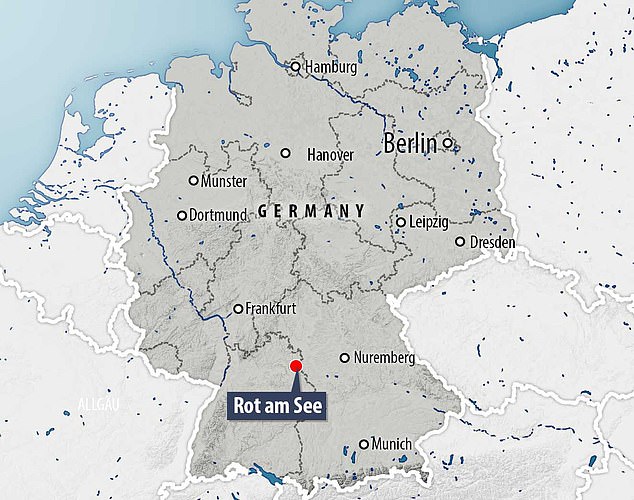 Aalen police said a gunman opened fire shortly after midday in the southwestern town of Rot am See, Baden-Wuerttemberg, 105 miles northwest of Munich

German media had earlier reported that the group had met in the hotel for a family gathering, but police have so far been unable to confirm this.

Investigators say the crime was committed with a semi-automatic handgun, for which the suspect held a license for sport shooting.

The weapon was found inside the building after officers arrested the 26-year-old man.

While owning firearms is not illegal in Germany, most guns can be acquired only with a licence and they are closely monitored, making mass shootings comparatively rare.

In July 2016, a teenager used a pistol bought illegally online to kill nine people in a Munich shopping centre, before turning the weapon on himself.

Germany has also been the target of a number of jihadist attacks in recent years, although most of the perpetrators did not use guns.

The most deadly took place in December 2016, when Tunisian Anis Amri drove an articulated truck into a Berlin Christmas market, killing 12 people.