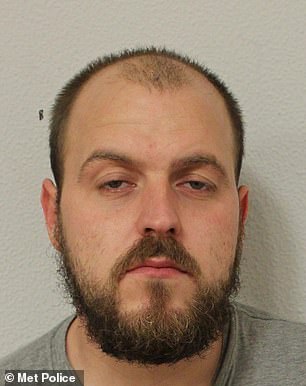 Ross Dawson, 32, was jailed for 35 years for three robberies and an aggravated burglary

A violent robber who tricked an 84-year-old woman into giving him a lift before  shoving her out and taking her car has been jailed for 35 years.

Ross Dawson, 32, of no fixed address, carried out a string of violent robberies including holding cab drivers at knifepoint in two incidents, robbing a women with the help of a female accomplice as well as aggravated burglary.

In the chilling attack on the 84-year-old woman, Dawson approached the car at her house in Romford, east London, and asked for a lift to hospital.

He claimed his pregnant wife was not feeling well on July 22, 2017, and the pensioner let them in.

But on the way Dawson forced her to stop on a secluded road, pushed her out of the car and sped away from the scene.

The incident was recorded on a passerby’s dash-camera.

Dawson also dumped his 15-year-old female accomplice, who cannot be named for legal reasons, and she was arrested and found with a black handled, eight-inch kitchen knife in her handbag. 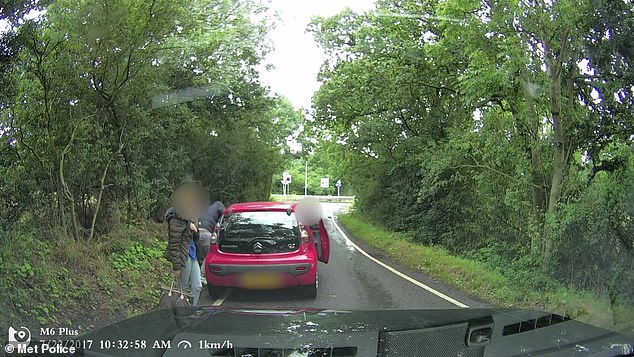 In one attack on July 22, 2017, he asked an 84-year-old woman to take him and who he said was his pregnant wife to hospital in Romford, east London 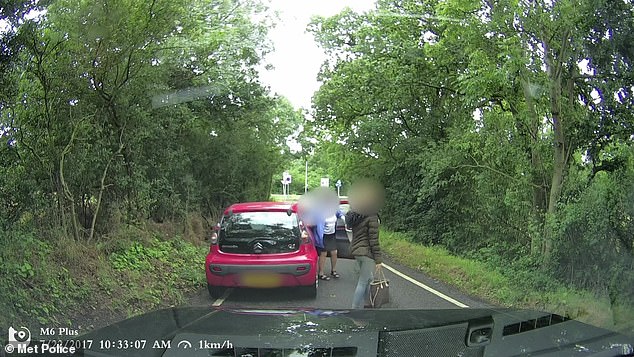 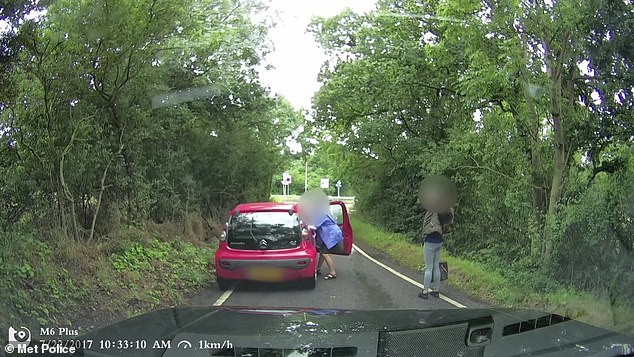 The scene was caught on the dash-cam of a car behind (pictured) and Dawson left his female accomplice on the side of the road. She was arrested and found to have an eight-inch knife on her

Detective Sergeant Billy Baxter said: ‘This is a despicable individual and whose violent crimes is some of the worst I have ever investigated.

‘His sentence clearly reflects the threat he was to the public and the fact he will not be even be eligible for parole until 20 years means his victims are afforded some peace of mind which will help them move on from such a harrowing experience.’

In a similar attack, Dawson and a woman got into a taxi in Romford in the early hours of July 4, 2017.

He told the driver to pull over because his pregnant wife was feeling sick in the back seat. 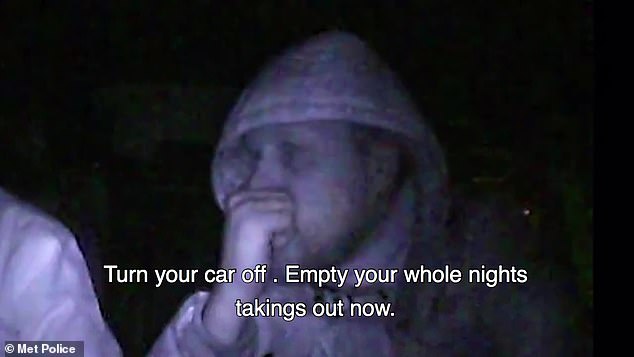 After the car stopped, Dawson pulled out a knife, punched the driver in the face and demanded money from him.

The cab driver said he could take the money as he started to get out of the vehicle but Dawson dragged him to the floor and held the knife to his throat.

He ordered the driver to give him the car key but it snapped in the struggle meaning Dawson could not start the vehicle.

Dawson and the woman fled on foot. 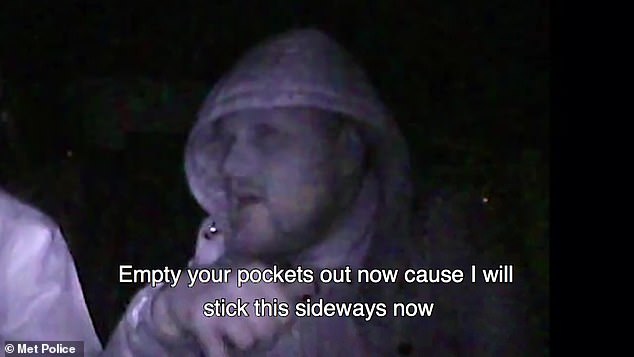 Dawson pulled out a knife, punched the driver in the face and said he wanted money 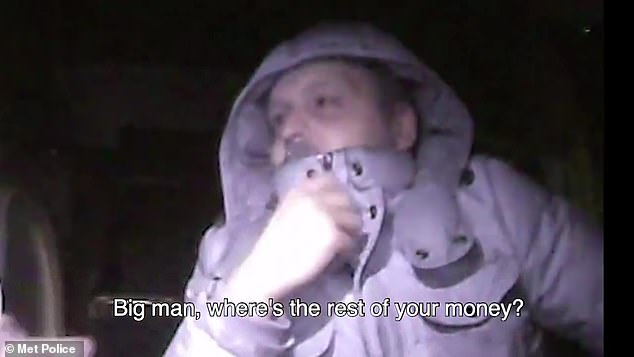 The taxi driver agreed and said he could take the money, but Dawson dragged him to the floor and held a knife to his throat. He demanded the man’s car key which had snapped, so Dawson and the young girl fled on foot. The incident was caught on the driver’s security camera

A fortnight later, on July 15, 2017, a woman asked for a taxi to Kingsbridge Circus, Romford, and a 61-year-old driver took the call.

The male driver arrived and two men approached the taxi – with Dawson getting in.

He asked to be taken to Crow Lane in Romford but the driver asked for payment first.

Dawson offered his phone as a surety but the driver declined.

The robber again pulled out a knife and demanded money.

The victim – who said he was scared for his life – handed over his wallet and Dawson asked for the chain around the driver’s neck – which was his taxi ID.

The incident was recorded on the driver’s dash-cam which Dawson had failed to notice.

The last incident happened on August 3, 2017, at around 7pm in Ilford.

A 30-year-old woman answered the door to a young girl she knew and let her in the house.

But a short while later the girl opened the door for two men, which included Dawson and a white man known only as John.

John put a knife to her throat and demanded she tell them where her valuables were hidden.

Dawson then went behind the victim and put his right arm over her right shoulder and put her in a headlock.

He started to squeeze her neck and the victim told police she thought she was going to die.

She lost consciousness, blacked out and fell to the floor.

When she woke up her whole body was shaking but she realised the robbers had gone. She rang police and screamed for help down the street.

Dawson was identified in all the incidents and charged on August 3, 2017.

He pleaded guilty to three robberies and one aggravated burglary at previous hearings at Snaresbrook Crown Court – where he was sentenced today.

The court heard how Dawson would use a knife and target young women in his attacks, despite being wanted on recall to prison.

A 32-year-old man was arrested on September 17 in connection with the incident on August 3, but was released.

The 15-year-old girl pleaded guilty at youth court in October 2017 to possession of a pointed and bladed article.

Dawson’s 35-year sentence includes two charges brought against him by West Mercia Police for blackmailing other inmates while he was in custody.

'We need to get a grip': Philip Hammond's rallying cry to MPs as he backs Theresa May
Kanye West shares clip of himself urinating on Grammy Award amid fight with music labels
Ministers squirm as they insist Dominic Cummings did NOT break rules
Britons could need VISAS to travel to France if the UK crashes out of the EU with no deal
Ghislaine Maxwell 'read Epstein victims book while in hiding'
Tories call for investigation into £3million that George Soros funnelled into anti-Brexit campaign
Coronavirus: UK government accused of giving mixed messages
Donald Trump says a travel ban WITHIN the US is 'possible' if coronavirus outbreak 'gets too hot'