Octopuses which get wartier skin the deeper they live in the ocean have been discovered, but scientists aren’t sure why it happens.

In another mystery from the deep, warty looking octopuses, once believed to be different species, are in fact the same octopus species as their smooth skinned shallow water counterparts, Graneledone pacifica.

An analysis of the animals’ DNA revealed that while they may look like very distant cousins they’re still the same species – with the unsightly bumps on their skin caused by how deep in the sea they live.

Scientists believe the variation in the species is due to the environmental influences on them that different populations have experienced in the contrasting habitats. 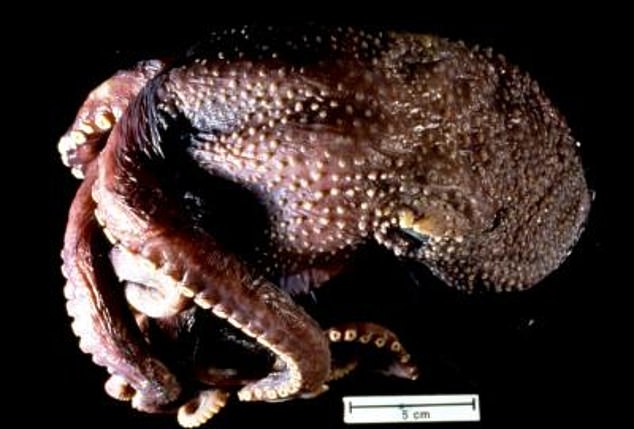 A deep sea variant of the octopus species, Graneledone pacifica, living in the Northeast Pacific Ocean

Janet Voight, associate curator of zoology at the Field Museum and the lead author of the paper in the Bulletin of Marine Science said: ‘If I had only two of these animals that looked very different, I would say, “Well, they’re different species, for sure.”

‘But variation inside animal species can sometimes fool you. That’s why we need to look at multiple specimens of species to see, does that first reaction based on two specimens make sense?’

The secret to why and how these bumpy skinned octopuses came about is yet to be uncovered through analysis as scientists remained puzzled as to why they have adapted in such a way.

Plunging deep into the ocean in a human-occupied submersible vehicle named ALVIN, Dr Voight scooped up some of the octopuses from the Northeast Pacific Ocean.

The team also studied specimens from up and down the Pacific, from as far north as Washington State to as far south as Monterey, California, and from depths ranging from 3,660 feet to more than 9,000 feet below the ocean’s surface – loaned from the University of Miami Marine Laboratory and the California Academy of Sciences.

The deep-sea specimens were smaller, with fewer arm suckers, and, most noticeably, bumpier skin than those from shallower depths.

While scientists are not sure why the warts occur at lower depths other differences in the varying species has been accounted for. 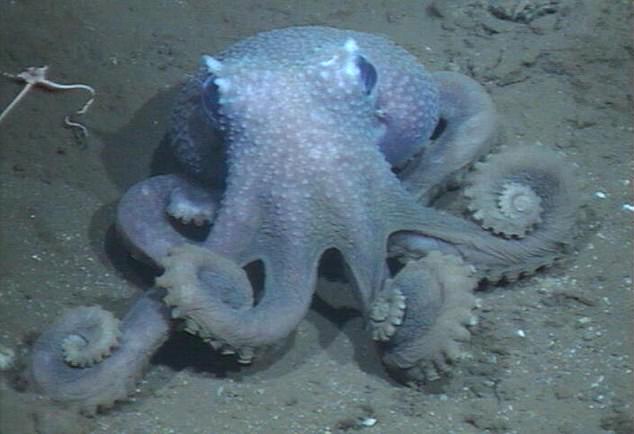 Groups who live in warmer and lighter conditions, in the shallows are proven to be larger and have more suckers than their deep sea cousins.

But as comparing the octopuses’ DNA sequences revealed only minor differences – suggesting they are the same species, Graneledone pacifica – scientists believe these variants are due to the prevalence of food.

Dr Voight thinks that deep sea octopuses usually eat creatures from the sediment on the ocean floor, passing food from sucker to sucker and then crushing their prey like popcorn.

She said: ‘There’s less food as you get deeper in the ocean. So these animals have to work harder to find food to eat.

Support for this hypothesis comes from the number of suckers on the males’ arm that transfers sperm packets to females.

Earlier research by Voight found that male hatchlings have a full-formed arm with all its suckers in place. 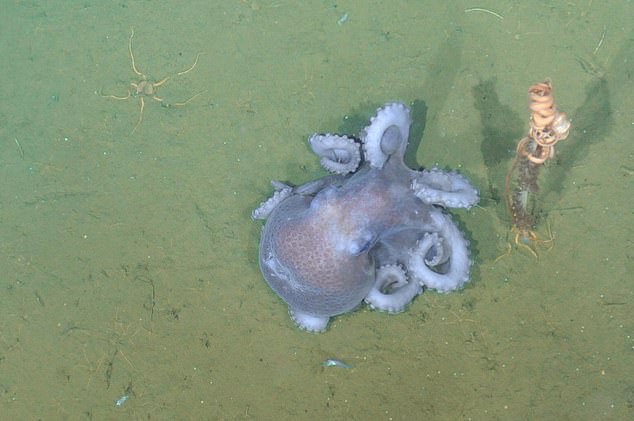 A smoother specimen of Graneledone pacifica species, living in shallower and warmer waters – they are larger than their deep sea counterparts

The researchers documented that the number of suckers on this arm was way smaller in males from greater depth, and Voight hypothesizes it relates to egg size.

Dr Voight explains: ‘The octopus hatchlings in shallower water, only 3,660 feet, are bigger. Their eggs had more yolk.

‘As the embryos grew, they developed farther inside the egg than the ones from 9,000 feet, who were developing in smaller eggs.

‘They had less energy to fuel their growth before they left the egg, so they made fewer suckers.’

Dr Voight believes seeing these physical manifestations of octopuses’ food limitation provides a hint of how they might fare as climate change progresses and the octopuses’ food supply fluctuates.

Thousands across the world join forces on International Nurses Day
Hyena bites buffalo on the balls after fight with lions
Gareth Southgate agrees to take 30 per cent pay cut during coronavirus crisis
Pizza Hut Taiwan launches RAMEN pizza - complete with noodles, pork slices and a soft-boiled egg
One in three dementia payments forced to sell their home to pay for care, shock new poll reveals
TV twin doctors Dr Xand and Chris van Tulleken reveal their anti-ageing plan
Paratrooper in a wheelchair is helped to his feet by two younger veterans on Armistice Day
Boy, 10, with cerebral palsy 'melts hearts' of GMB viewers after raising over £50,000