Philip Hammond has urged rebel Tory MPs to ‘get a grip’ and back Theresa May‘s Brexit deal next week or risk never leaving the EU.

Responding to a question about four Cabinet ministers ignoring a three-line whip and abstaining on Wednesday’s vote to rule out no deal Brexit, he told the BBC‘s Andrew Marr Show: ‘I think a line has been drawn under that now.

‘The PM was very firm in Cabinet that we need to get a grip on our discipline to get the country through a very difficult process.’ 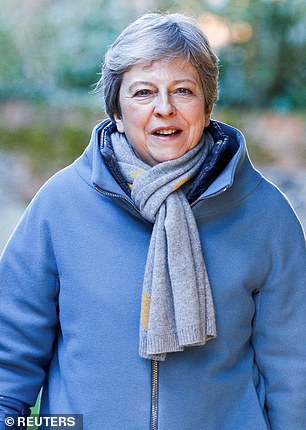 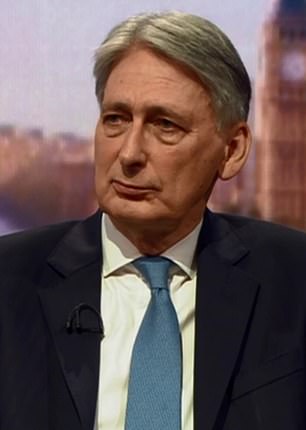 Chancellor Philip Hammond today said (right) a vote on the Brexit deal would ‘not definitely’ happen this week. Pictured left: Theresa May at her church in Berkshire today

Mrs May angrily criticised David Gauke, Amber Rudd, Greg Clark and David Mundell for not voting with the government on the no deal vote at a Cabinet meeting on Thursday.

Cabinet ministers would normally be expected to resign for defying a three-line whip, the strongest possible, and their decision to remain in their posts angered Brexiteers .

Tory MP Mark Francois telling Sky News: ‘The collective responsibility has disintegrated – you might as well tell the whips to pack up and go home. The government is barely in office.’

On Marr, Mr Hammond appeared to reject reports he had discussed abstaining on Tuesday’s vote, saying ‘I don’t think so’.

Earlier today, Mrs May begged MPs to act like ‘patriots’ and vote for her Brexit deal if it makes a third showing on Tuesday or Wednesday – as it emerged the EU is ‘war-gaming’ for the fall of her government.

Mr Hammond told Marr a vote on Brexit would ‘not definitely’ happen – as he refused three times to rule out whether he had offered more money to the DUP to back Theresa May’s deal.

‘We will only bring the deal back if we are confident that enough of our colleagues and the DUP are prepared to support is so that we can get it through Parliament.

‘We are not just going to keep presenting it if we haven’t moved the dial.’ 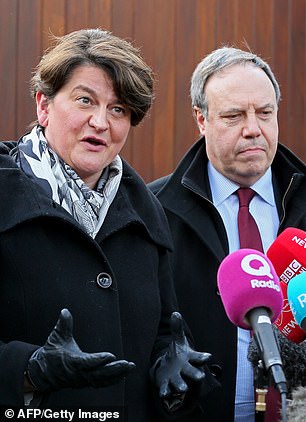 Mr Hammond refused three times to say whether he had ruled out offering the DUP more cash for Northern Ireland in return for backing the deal. Pictured: Arlene Foster and Nigel Dodds in Belfast on February 8

Mr Hammond referred to signs hardcore Brexiteers are sliding in their opposition to Mrs May’s withdrawal agreement, which was voted down on Tuesday but will go before MPs again on Tuesday or Wednesday next week.

‘What has happened since last Tuesday is that a significant number of colleagues, including some very prominent ones who have gone public, have changed their view on this and decided that the alternatives are so unpalatable to them that they, on reflection, think that the Prime Minister’s deal is the best way to deliver Brexit.’

Mr Hammond acknowledged the numbers were not there yet and it was a ‘work in progress’.

Mr Hammond said it was ‘absolutely vital’ to get Mrs May’s deal through in the next week because ‘it’s the final chance to do this deal without having to have a long extension of the Article 50 period’.

The Chancellor insisted it was ‘not economic blackmail, it’s common sense’ to say that he would not be able to release £27 billion of public money from his Brexit war chest unless the deal was done, as he needed to keep it in reserve to cope with a no-deal departure.

Asked whether the Prime Minister would quit if she thought she was part of the problem, Mr Hammond said: ‘She is the kind of person who will always do what she thinks is in the best interests of the country.

‘She is a person with a very strong moral streak to everything she does and she will always do, I’m sure, what she feels is in Britain’s best interests.’

The Government has been locked in critical negotiations with the DUP this weekend to persuade them to sign up to Mrs May’s deal.

Downing Street hopes that, if the DUP backs the deal, most rebel Tory MPs would then also fall into line. The party has stressed that the presence of  Mr Hammond at a meeting on Friday did not mean that money was being demanded.

The Chancellor refused three times to rule out that he had offered the DUP more money to back the deal.

‘This isn’t about money,’ he said, before adding: ‘We are coming up to a spending review and we will look at all our budgets.’

The Prime Minister has said it would be a ‘potent symbol of Parliament’s collective political failure’ if a delay to Brexit meant the UK was forced to take part in May’s European elections almost three years after voting to leave.

She warned that if MPs did not back her deal before Thursday’s European Council summit ‘we will not leave the EU for many months, if ever’. 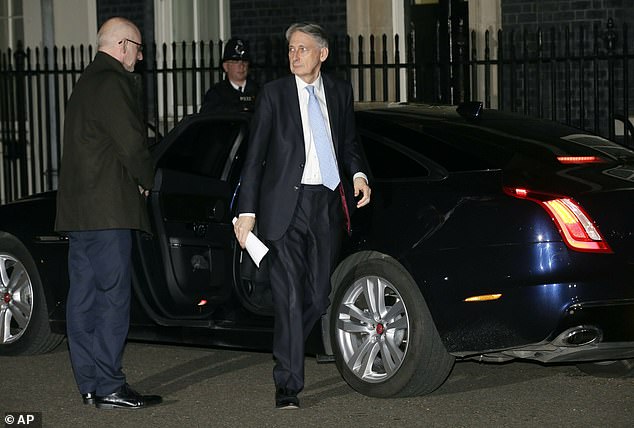 Mrs May acknowledged that even if her deal is passed before the summit of EU leaders the Government would need a ‘short technical extension’ beyond the scheduled March 29 Brexit date.

‘That is not an ideal outcome – we could and should have been leaving the EU on March 29,’ she wrote in the Sunday Telegraph.

‘But it is something the British people would accept if it led swiftly to delivering Brexit.

‘The alternative if Parliament cannot agree the deal by that time is much worse.’

Mrs May said her fellow leaders would demand a ‘clear purpose’ for a longer extension that was not merely a technical delay to allow legislation to pass. This could lead to Britain taking part in the EU elections, an idea that ‘didn’t bear thinking about’.

Her call to arms came as leaked documents revealed moves in Brussels to prepare for the collapse of Mrs May’s government should her vote fail.

In a briefing note, the EU commission secretary general Martin Selmayr said: ‘Imagine they have a new Brexit secretary or prime minister – what then?

‘Article 50 has been agreed and the process has ended. It must be clear that the starting point is not a renegotiation of the withdrawal agreement.’

Gangster 'Dublin Jimmy' dies during raid in England by kidnap probe police
Boris camp 'LENDS votes' to Hunt to make sure Johnson faces 'weakest' opponent in final two
Boris and Carrie are seen together for first time since police row
Horror as boy, three, dies after falling from fourth-floor flat
Father-of-three, 35, and his baby son 'were just 20 seconds from home' when they were killed
Gags on NHS whistleblowers to be banned as Health Secretary insists staff won't be silenced
Rare 14th century gold coin worth up to £3,000 is found hidden inside a wooden bureau
BBC free TV licences limited to those on Pension Credit from June 2020