Nigel Farage laid out his threat to Boris Johnson today: Back me or risk seeing Jeremy Corbyn enter Downing Street in December.

The Brexit Party leader said his party would stand in 500 British seats at the December vote unless the Prime Minister abandoned his hard-won Brexit deal and pursued a much harder Brexit.

He also wants the Conservatives to give his party a free run in as many as 150 seats where a split vote could allow Labour to win.

His hardline approach to force a ‘leave alliance’ came after Donald Trump  indicated he supported some sort of pact between the parties.

But the Tories, who have made considerable gains in the polls, continue to rule out doing any deals.

So what does Nigel Farage want?

He wants a deal. But not a Brexit deal. He wants a hard so-called ‘clean-break Brexit’ rather than the compromise agreement that Boris Johnson won a fortnight ago.

That deal is certain to come back before MPs if Mr Johnson wins a majority in the December 12 election.

Instead Mr Farage wants Mr Johnson to form a ‘Leave alliance’ between their parties and pro-Brexit MPs elsewhere.

That would see the Withdrawal Agreement scrapped in favour of a looser free trade arrangement that sets greater political and economic distance between the UK and Europe.

How does he intend to get it? 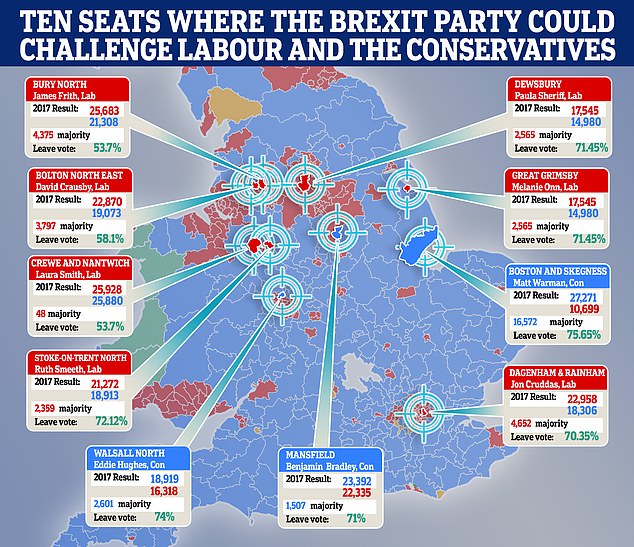 Threats and coercion. He told Mr Johnson this morning that he would stand Brexit Party candidates against the Tories in 500 British seats (but none in Northern Ireland) if the PM refused to heed his warning.

There had been claims that the Brexit Party might streamline its efforts to concentrate on around 100 key target seats.

But speaking in London, Mr Farage upped the ante, saying: ‘Do not underestimate our determination or organisation.’

He added that he hoped that ‘common sense prevails over the next two weeks’ and that the two parties can strike a pact.

So are we going to have a Parliament full of Brexit Party MPs?

Probably not. They came close in the Peterborough by-election in May, where Labour won by just 600 votes because of a split between the Faragist candidate and the Tories.

And this is part of the threat to the Tories. The Brexit Party power lies mainly in splitting the Brexiteer vote, and that is the threat they are throwing at Downing Street.

An audit by the Daily Mail today found Mr Johnson could miss out in almost 90 battleground constituencies if they run against each other.

If the Brexit Party choose not to stand and 70 per cent of their backers switch to the Tories (while 30 per cent go to Labour), then the Conservatives could take 38 target seats off Jeremy Corbyn‘s party.

Are the Tories up for a pact? 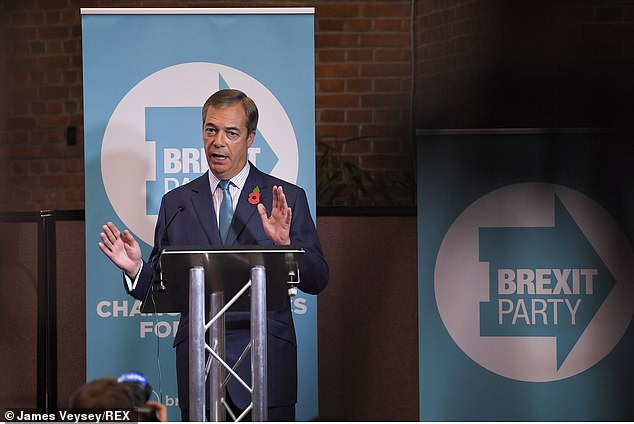 While some Tory MPs and backroom figures support a link-up, others believe that now there is a viable deal that could see Brexit happen within weeks, it has no need to placate Nigel Farage

The signs are not strong.  As mentioned above, Mr Johnson has extended his lead in the opinion polls over Jeremy Corbyn’s Labour to as much as 17 points since he got a deal with Brussels.

While some MPs and backroom figures support a link-up, others believe that now there is a viable deal that could see Brexit happen within weeks, it has no need to placate Nigel Farage.

They believe that only a small hardcore of voters still wants to leave without any deal at all and will have a negligible effect on the election.

The Daily Mail analysis also showed Mr Johnson could win a further 50 Labour-held seats if all those forecast to vote for the Brexit Party instead switch their support to him.

The analysis is based on projections produced by the firm Electoral Calculus, based on current polling.

Tory chairman James Cleverly said: ‘A vote for Farage risks letting Jeremy Corbyn into Downing Street via the back door – and the country spending 2020 having two referendums on Brexit and Scottish independence.

‘It will not get Brexit done – and it will create another gridlocked Parliament that doesn’t work.’

And even the hardcore Brexiteers are no warmer. Steve Baker, chairman of the European Research Group of Tory Brexiteers, said he was ‘at a loss’ as to what Nigel Farage wants to achieve.

He told the PA news agency he would not abandon his support for the PM’s Brexit deal to avoid a challenge from Mr Farage’s party, saying: ‘I am no more willing to be bullied by Nigel Farage than anyone else into acting against my best understanding of the national interest…

‘I’m now at a loss to know what Nigel Farage wants to achieve.

‘The reason every Conservative Eurosceptic MP backed the deal is that it can deliver a Brexit worth having. But Boris will only negotiate a great future for the UK if he has a good majority of resolute Conservative MPs. Nigel now risks that and our future.

‘It is completely inconceivable that the Conservative Party would now go for no deal and a pact. Is Nigel a statesman or a campaigner? We are about to find out.’

Is the Brexit Party united behind Nigel Farage?

Not necessarily. There are reportedly splits over its hardline strategy.

The veteran MEP had been due to launch the party’s campaign for December 12 yesterday.

But the event was pushed back to today amid claims he was wavering over whether to ditch the commitment to stand in all 650 seats.

Arron Banks, founder of the Leave.EU campaign – a close confidant of Mr Farage – has been urging him not to split the Eurosceptic vote.

He is understood to have told Tory friends: ‘The Brexit Party is completely split and Nigel has got to make a decision.’

It is just Tory targets the Brexit party is threatening? 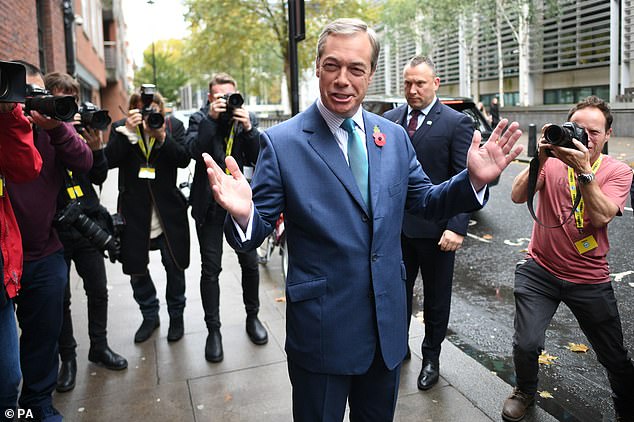 Mr Farage also said he would aggressively go after Labour-held Leave-backing seats in areas like the east Midlands, the north east of England and South Wales

No, it has Labour Leave seats in its sights.

Mr Farage also said he would aggressively go after Labour-held Leave-backing seats in areas like the east Midlands, the north east of England and South Wales.

He said those were ‘absolutely among our top targets’ as he attacked Labour’s plan to hold a second referendum.

He said the proposal to pitch a Brexit deal negotiated by Jeremy Corbyn against Remain at a national ballot would represent a ‘complete and utter betrayal’ of Leave voters.

He also insisted it was ‘nonsense’ to suggest that such seats could vote for Mr Johnson and that the ‘Brexit Party poses a very major problem to Labour’.