When my son Oli was killed in the September 11 attacks, my husband and I flew straight to the US.

It was a beautiful sunny day when we arrived in New York – and that bothered me. The fine weather jarred with our despair. It’s been like that ever since.

Every beautiful thing in life – even the arrival of a grandchild – is tainted. Life goes on, but it is never the same.

I regard it as a life sentence. There is no parole. No hope of early release. Even my name – Joy – conflicted with how I felt. 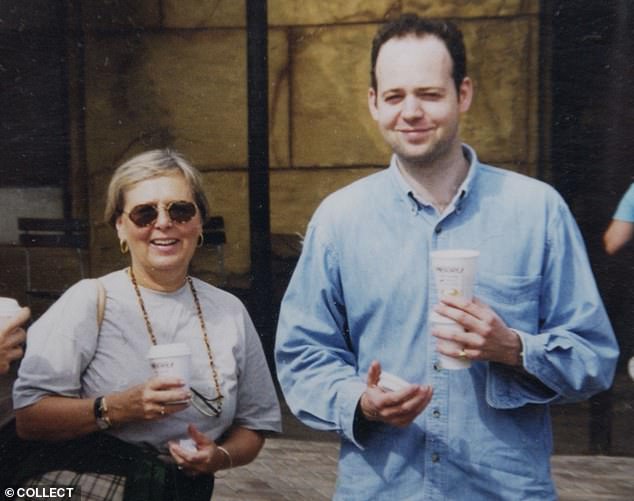 Joy Bennett, pictured left, with her son Oliver Bennett, 29, who died in the World Trade Centre in the September 11 terrorist attacks

This week, we discovered that Mounir el-Motassedeq, who acted as the ‘treasurer’ for the heartless terrorists who killed my son, has just been released from prison after being sentenced to 15 years.

It’s hard to put into words how it felt to look at how this man received a hero’s welcome in Marrakesh.

My first reaction was one of shock when I saw how young he was. I hadn’t realised that el-Motassedeq was only 27 when he became involved.

Here was a man who is now 44, a man with a life that can be rebuilt. I will never know what Oli would have looked like at the same age.

Of course we had known that this day was coming. At the time of el-Motassedeq’s trial in 2003, 15 years seemed a small punishment for someone who had spent time in an Al Qaeda training camp and directly organised the killers’ finances.

But at least somebody was being charged. The pilots who flew into the Twin Towers, where Oli was attending a conference on global finance, were dead, and there seemed little hope of anyone being brought to justice.

Naively, perhaps, we were just relieved that someone was being held to account. Though I still don’t know how the judges thought 15 years was enough. All I can say is that we, Oli’s family, got this life sentence, and are reminded of it every single day.

The parallels between this man’s future, and Oli’s lack thereof are painful. 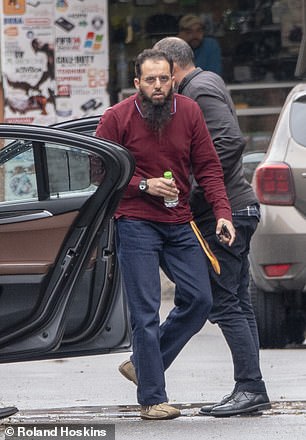 Mounir el-Motassedeq, who acted as the ‘treasurer’ for the heartless terrorists who killed my son, has just been released from prison after being sentenced to 15 years

This man’s children were thrilled to have him home. Oli never got the chance to have children. I am not a vengeful person, but it is hard to read about el-Motassedeq’s home-coming, when Oli will never come home.

My concerns aren’t just about our family’s loss and pain, though. El-Motassedeq is now a free man. Free to do what, though?

As the Mail reported yesterday, there seems to be a neglible amount of surveillance being carried out on him now. Who has responsibility for him? What moves have been made to address his radicalism?

While the Germans may be glad to see the back of him, no doubt it would have been safer if he’d remained in Germany under strict surveillance. I have found myself wondering what Oli would say about this situation. We could not have been prouder of our son and all he achieved.

He’d studied psychology and economics at the University of St Andrews, and ended up moving to New York to write about complex financial markets.

More importantly, he’d turned into a wonderful young man – caring, warm-hearted, fun to be around. I have no doubt he would have done remarkable things.

We didn’t know immediately that he had been caught up in the attacks. I was in a shop when I saw the footage, and it wasn’t until I got home that the phones started ringing…

He would not have wanted a knee-jerk reaction when it comes to justice. In the months immediately after 9/11, I was horrified by the response of the authorities.

I saw the then prime minister Tony Blair and told him never to say he was waging the Iraq war in my son’s name.

He wouldn’t have wanted any one else – more innocent victims – to be killed. I like to think I have had a measured response to his death. I certainly don’t hate Muslims.

My anger is directed at the authorities who were aware of these sorts of extremists operating and failed to take robust action.

The true perpetrators have never been brought to justice. And with el-Motassedeq being released, can we really know he has put an end to his life of terrorism?

I do not know what I would say if I were in the room with el-Motassedeq. I suppose I would ask him what was he possibly hoping to gain by the slaughter of so many innocent people?

Maybe he will be sitting down and explaining himself and his actions to his own children now, leading a peaceful and productive life.

I hope – for all our sakes – that whatever he is saying isn’t simply fuelling another generation with murderous hatred.

If it is, his relatively short prison sentence will be dangerous for us all.

Releasing 9/11 terrorist after 15 years shows others ‘they can get away with mass murder,’ blasts furious family of British victim killed in attacks

by Larisa Brown and Tom Witherow

British families of the 9/11 victims last night said the early release of one of the terrorists would inspire other fanatics to commit mass murder.

They said it was astonishing the German authorities had allowed Mounir el-Motassadeq to return home to Morocco.

Patricia Bingley, whose only child Kevin Dennis died in the World Trade Center attack, said: ‘I thought once they caught these terrorists, that would be it – they’d be away for life.

‘If they are not going to kill them or hang them, they should be in prison for life. Other terrorists will see this and know they can get away with mass killings.’

Pauline Berkeley, whose 37-year-old son Graham died in the attack, said she hoped el-Motassadeq would ‘rot in hell’. ‘He has only served 15 years, and we have suffered for 18 years,’ said the 81-year-old.

‘It’s not long enough for all the people he killed. They should be in prison for life. They can now do it again, and that is disgusting.’

Politicians and military chiefs also vented their fury at the jubilation that greeted el-Motassadeq’s return home to Marrakesh.

The 44-year-old father of three was one of only two men to have been tried and convicted over the atrocity which killed 2,996 people, including 67 Britons.

Following several trials he was sentenced to 15 years in 2007 after being convicted of being a member of a terrorist organisation and an accessory to the murder of 246 passengers and aircrew. But the effective treasurer for the 9/11 pilots was freed on October 15 on condition he leave Germany and not return.

Speaking from her home in Clacton, Essex, Mrs Bingley, 83, added: ‘The pilots who killed all those people are gone – they can’t be put in prison. That’s why the victims were pleased and relieved to see people put in prison. Seeing him there in the street with his family and friends is hard to stomach.’

Colonel Richard Kemp, a former commander of British forces in Afghanistan, said: ‘Fifteen years in prison and he is released early.

‘I felt it was a ridiculously short sentence to give to somebody who was obviously heavily involved in the murder of so many people.’

Theresa May knights Geoffrey Boycott and Andrew Strauss
Prince William arrives in Christchurch with New Zealand Prime Minister Jacinda Ardern
Trump says he's sit down with China's Xi in the near future to discuss trade deal
We sold for £495k: How to get interest-free loans to fix empty homes
Sir Cliff Richard settles his legal battle with the BBC for £2million
What the world will look like in 50 years time
Dina Asher-Smith WINS 200m World Athletics gold for Britain in front of another sparse crowd in Doha
Director of James Bulger film admits he didn't contact family