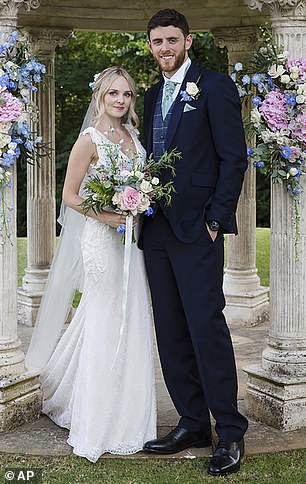 Wedding day: PC Harper and wife Lissie were married only a month ago

Officers hunting the killers of PC Andrew Harper found a car on fire at the travellers’ site where they arrested ten suspects less than an hour after the policeman was run over and killed.

The vehicle is being treated as potential evidence in the investigation into the shocking death – the first killing of a policeman for two years. The 28-year-old officer, who got married just a month ago, was dragged under a car and died after approaching a suspicious vehicle late on Thursday night.

He had been attending the scene of a reported burglary in the Berkshire village of Bradfield Southend. Police arrested ten males between the ages of 13 and 30 at a council-run site three miles from the murder scene shortly afterwards. Last night they were still being questioned after Thames Valley Police detectives were granted an additional 36 hours to hold them in custody.

Earlier in the day, forensic officers had been seen searching the travellers’ caravan site.

It was barely a month ago that PC Harper married Lissie Beckett at Ardington House near Oxford. The couple were looking forward to going on their honeymoon this week. 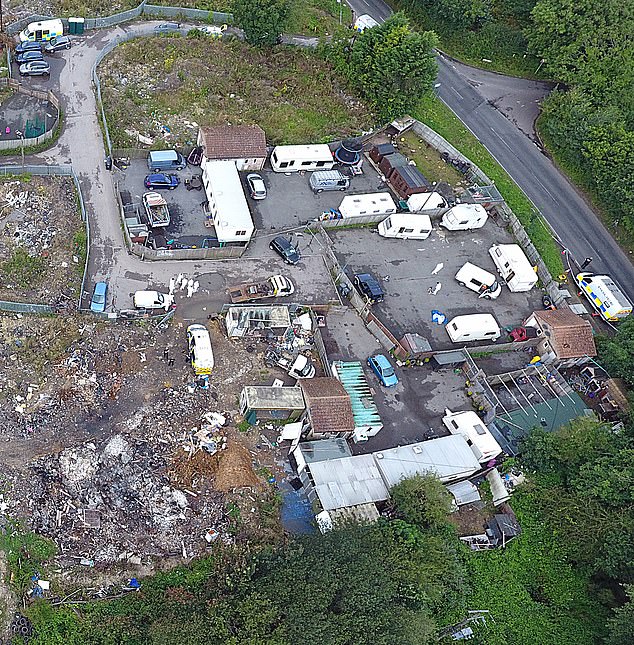 Arrests: The travellers’ camp near the murder scene in Berkshire. Officers arrested ten males at the site – aged between 13 and 30 – on suspicion of murder within an hour of PC Harper’s brutal death

PC Harper’s uncle, Mark Harper, added: ‘We are a close-knit family and we’ve been left absolutely devastated by this. We are supporting one another at the moment and we’re being kept updated with the police investigation.’

He called for stiffer sentences for those who attack the police, adding: ‘Police officers need more protection. If anything good can come out of something as tragic as this, it has to be a greater deterrent to criminals.’

PC Harper’s mother-in-law Julie Beckett wrote on Facebook: ‘I love you like a son and always will. Rest in peace, my lovely son-in-law.’

His sister Kate Hopkins wrote on her Facebook page: ‘Forever my brother. A hero until the end. The best friend I could ever have. Love and miss you always, Andrew.’ 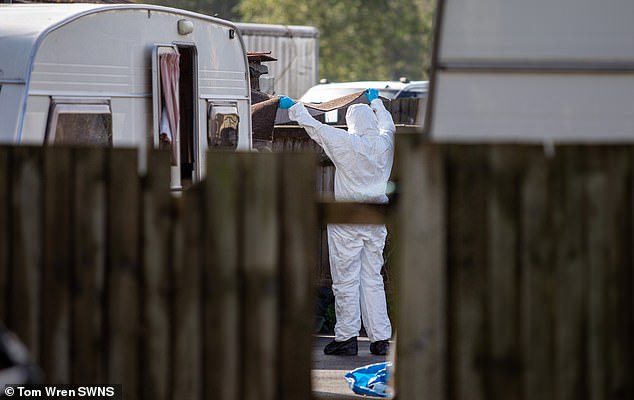 Earlier in the day, forensic officers had been seen searching the travellers’ caravan site

Another tribute read: ‘A shockingly sad day. We come together as a brotherhood at times like this and hopefully your family can take some comfort from that love and support.’

An online fundraising page PC Harper had set up ahead of a 20-mile run in aid of a cancer charity has attracted more than £8,000 in donations since his death from people paying tribute.

Police received a call at 11.18pm on Thursday from someone who said thieves were breaking into their home. PC Harper and his colleague, of the Thames Valley Roads Policing Unit, were the closest to the scene and raced towards the cottage.

Seeing a suspicious vehicle in a country lane, PC Harper, who had been with the force since 2011, got out of his car and approached it.

Police said PC Harper was run down and dragged under the vehicle, which drove on for almost 50 yards, across the A4 Bath Road dual carriageway, turning into Ufton Lane on the opposite side of the road.

It was here that PC Harper’s body was released from under the vehicle, before an unmarked Ford police dog unit vehicle responding to the incident turned into Ufton Lane and struck him as he lay in the road. 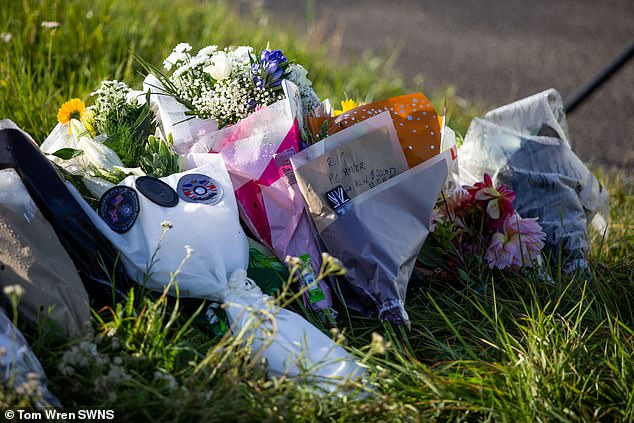 Pictured: Flowers left at the scene where PC Andrew Harper was tragically killed on Thursday

PC Harper’s horrified partner reportedly cradled his body and begged the fallen officer to ‘stay with me, keep breathing’.

The officer was declared dead at the scene, while colleagues set off in pursuit of the killers, who had continued driving up Ufton Lane in the direction of a travellers’ site called Four Houses Corner. The plot has enough space for 16 caravans and is run by West Berkshire Council.

Officers discovered the vehicle on fire and immediately rang the Fire Service.

A source said: ‘The officers were concerned that this could be an attempt to destroy evidence.’

Detective Superintendent Alisa Kent of the Major Crime Unit, which is leading the investigation, said enquiries were continuing last night.

She added: ‘A post-mortem examination was carried out on Andrew’s body yesterday, and the cause of death has been recorded as multiple injuries. The cause of death is consistent with our current belief that Andrew was caught between a vehicle and the road, and then dragged for a distance.

‘However, the circumstances as to how Andrew came to be out of his vehicle and then caught under the suspect vehicle are unknown.

‘Within an hour of the incident happening, we arrested ten males aged between 13 and 30 on suspicion of murder. 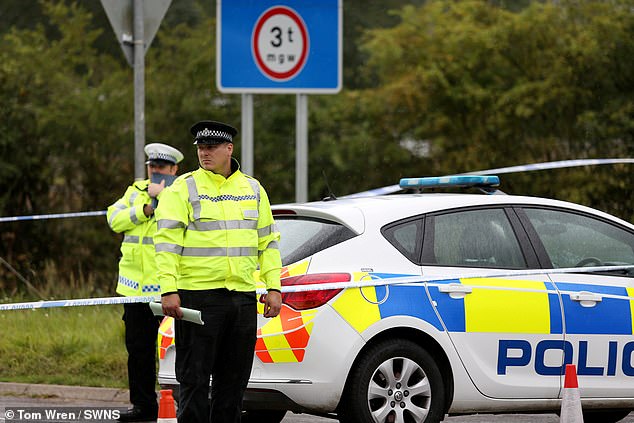 ‘The males were arrested from a local authority-run caravan and mobile home site, Four Houses Corner. In respect of our investigation, we are interviewing those in custody, carrying out house-to-house enquiries, obtaining and reviewing CCTV footage, undertaking forensic examination, and taking witness statements.’

PC Harper’s death renewed the debate about policing cuts which have seen 22,000 frontline officers axed since 2010.

Prime Minister Boris Johnson has pledged to hire 20,000 new officers amid spiralling violence on the streets. He said PC Harper’s murder was ‘mindless and brutal’.

Writing in today’s Mail on Sunday, John Apter, chairman of the Police Federation which represents frontline officers, said: ‘There simply are not enough officers to keep themselves, and our communities, safe.’ He added: ‘How can balancing a spreadsheet be more important than keeping people safe?’

PC Harper is the first officer to be killed on duty since March 2017, when Keith Palmer was stabbed by Khalid Masood during the Westminster Bridge terror attack.

The tragic death of PC Andrew Harper has devastated the police family to its core. While it is too early to draw any conclusion regarding this horrendous incident, it comes amid a growing climate of attacks on officers.

There has been a great deal of debate over the past few weeks about the risks officers face. The latest official statistics reveal that 85 officers are assaulted every day across England and Wales – but we believe this represents just the tip of the iceberg.

Look at social media and you will get a sense of what my members are facing. Bitten, headbutted, kicked, stamped on, spat at, and worse – just for doing their job. I’m repeatedly shocked by the leniency of the sentences handed out to those who act this way.

Many walk out of court smirking with a slap on the wrist, while my colleagues have to live with the consequences of their actions and the mental toll it takes. Years of austerity measures and palpable disdain from our previous Prime Minister towards policing have taken their toll.

There simply are not enough officers to keep themselves and our communities safe. Single crewing – which puts officers and the public at risk – and restricting the use of Tasers because of cost implications… how can balancing a spreadsheet be more important than keeping people safe?

Our new Prime Minister has made some bold promises. I welcome that – but we need details, and we need to know how these reforms will be funded.

Society must now say enough is enough and do all that can be done to protect our protectors.