Wimbledon was caught trying to cash in on its chips with ‘measly’ portions for sky-high prices in the SW19 restaurant this week.

Red faced staff were told to stick to strict portion control despite dealing with customer’s complaining over the embarrassingly sparse offerings of french fries at the pricey Baseline Grill.

The chef is said to have raised the issue of the frugal side orders with top brass at the All England Club – who refused to up the portions.

‘We know the portions are small and people have complained,’ a Wimbledon source said. 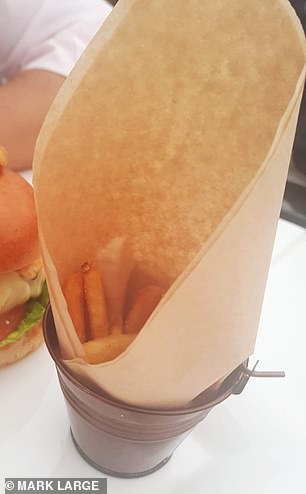 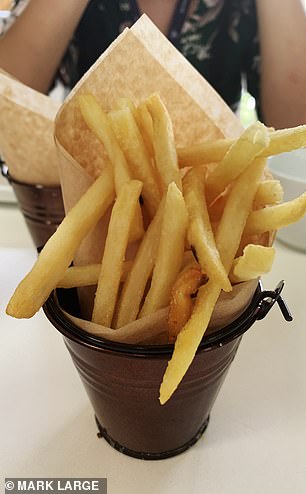 Wimbledon caterers were left red faced after taking complaints from several customers over the ‘measly’ portion sizes, with one man claiming to have received ’20 to 25 chips’ with his £18.10 burger and fries meal

‘We’ve raised it and even the chef has complained and tried to get them (the Club) to agree to bigger portions but they just won’t do it.

‘The chef took it right to the very top but it hasn’t made any difference. They said that’s how big they should be,’ the source added.

One customer who complained and asked for more fries in the sit down restaurant after paying £18.10 for a burger and chips was told that was all staff could give him.

‘I was surprised because I was given about 20 to 25 fries in this tiny bucket and asked if that was all I would be getting,’ the unimpressed customer told the Mail.

‘But the waitress just told me that was all she was allowed to give me. 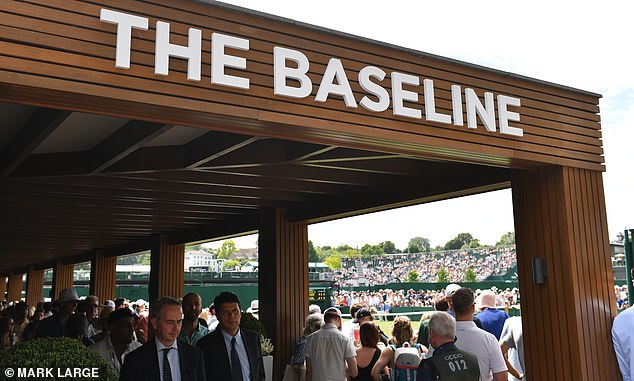 ‘She seemed a bit flustered and embarrassed. It was a measly portion to say the least…especially for how much the meal cost.

‘I know the Club is expensive but I thought that was pushing it. It wouldn’t kill them to add a few more chips,’ the 40-year-old company director added.

Anthony Davies – head of food and drink at the Club – said he had not received any complaints over the chip portions.

‘Baseline Grill has been part of our offering for some time. I haven’t been made aware of any complaints and we have made no change to our chip portions,’ he said.

But within hours of the Mail posing the question, the size of the chip portions appeared to have miraculously doubled in size from those being served up on Tuesday.

A dish of Smoked Haddock Arancini Scotch Egg – which costs £17.50 – was being served up with 42 fries yesterday with the new addition of a side salad – which had been missing earlier in the week. 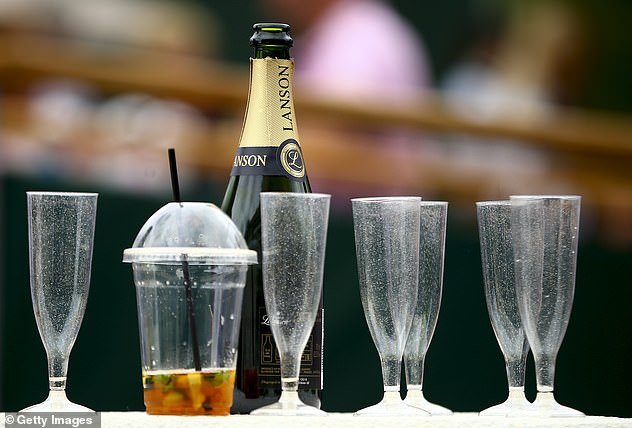 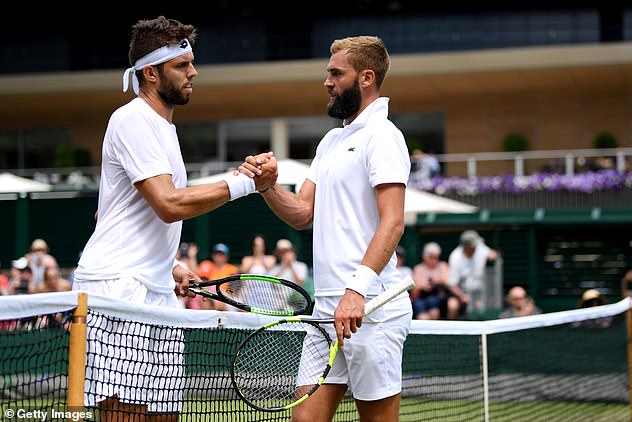 Frenchman Benoit Paire and Czech Jiri Vesely were battling it out in their second set on Court 18 when the cork interrupted play. Paire won the match with three sets to one

When asked why the portions had suddenly increased and a side salad added, the server reeled off the standard Wimbledon line of providing ‘customers with value for money’.

Many tennis fans bring in their picnics and alcohol to avoid being stung by the Club’s inflated prices.

A bottle of Lanson Rose Label is £89.50 – more than double the price in a supermarket.

Antonia Farrell, 35, from Glasgow, said of the costs at SW19: ‘It’s so expensive. It’s over the top…. they let us bring in a bottle of prosecco each and we have gorged on M&S.’

While local resident Arash Rezai, 29, took in her own bottle of sparkling rosé and a pot of stuffed olives from Waitrose to share with a friend, adding: ‘The cost is exorbitant so we have got sensible.’ 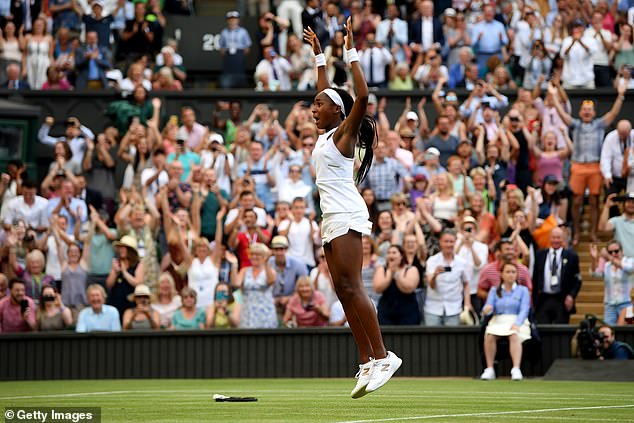 Wimbledon allows ground spectators to bring in one bottle of wine each, or two 500ml cans of beer, or two cans of premixed spirits. Spirits or fortified wines are banned.

Tennis fans have also long complained about the price of Pimms which costs £6.50 for a small glass and £8.50 for a large.

Mr Davies said: ‘Value for money is really important for us. The price of Pimms has been held for the third year running.

‘We have recognised that the prices and value for money is something we need to focus on.’

But spectators on Henman Hill said they were attempting to get more for their £8.50 Pimms by asking the bar staff for theirs with no ice yesterday.

Mr Davies said that the price of strawberries and cream has been held at £2.50 per portion of around 10 strawberries for the past 10 years.

But this did not stop ALDI – where you can get a 400g punnet for £1.69, from handing out free strawberries to spectator arriving at SW19 to poke fun at the inflated costs.

I won't bottle Brexit, pledges Boris in bid to divert attention away from his 'volatile' love life
Stage manager at Royal Opera House in London Gary Crofts in legal fight for £200,00 compensation
US defense chief slams China as rising threat to world order for 'stealing Western know-how'
James Charles fans bring Birmingham city centre to a standstill
Apple gives cautious sales forecast amid weakness in...
Jamie Oliver has held meetings with McDonald's for years, it is revealed
The Queen visits a pop-up replica of an early Sainsbury's store
Ryanair jet aborts its landing TWICE at Leedds Bradford Airport after being blasted by 50mph winds