A woman survived sepsis twice in six months, after claiming she was initially sent home from the hospital by doctors.

Jessica Tuffield, 23, from Kent, first visited her GP in March 2016 after suffering from lethargy, which is a hallmark symptom of the life-threatening condition, for two weeks.

She had suddenly become so unwell her vision blurred while driving her car, and her temperature and blood pressure were high.

Ms Tuffield was referred to Darent Valley Hospital in Dartford. But after eight hours, she claims she was discharged without a confirmed diagnosis, even though doctors suspected she had the killer complication.

The Honda sales executive became so ill at home she was continuously vomiting and could barely lift her head.

Her mother raised the alarm by calling 111, and according to Ms Tuffield, the paramedics were shocked she had been sent home.

Ms Tuffield spent around two weeks in hospital fighting sepsis, but said she doesn’t accuse doctors of missing her symptoms because they are notoriously difficult to spot.

Ms Tuffield was struck down again with sepsis six months later in November 2016, after she was able to spot the signs of the ‘silent killer’. She was immediately treated with antibiotics.

Jessica Tuffield, 23, from Kent, survived sepsis twice in six months, after claiming she was initially sent home from the hospital by doctors 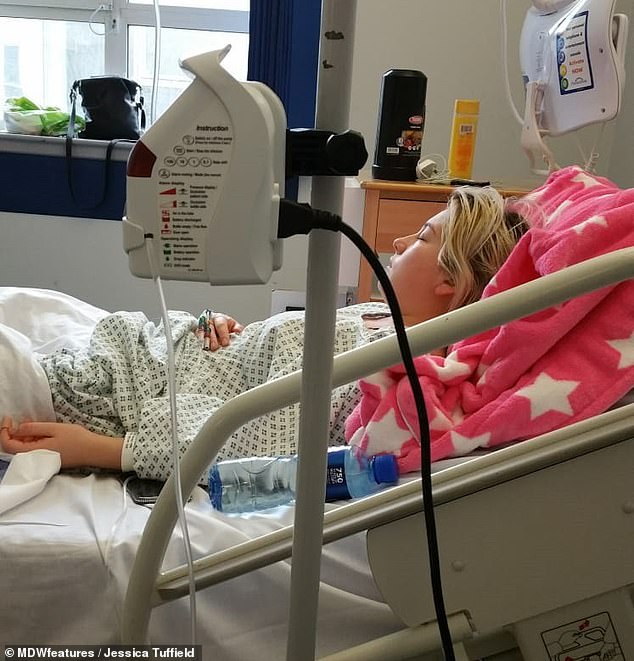 Ms Tuffield was rushed to Darent Valley Hospital in Dartford. But after eight hours, she claims she was sent home. Her mother raised the alarm by calling 111, and according to Ms Tuffield, the paramedics were shocked she had been sent home

NHS England issued new guidelines for all hospitals in April, threatening them with fines if they fail to spot and treat sepsis.

Staff in A&E departments are obligated to alert senior doctors of any patients suspected of having the condition within an hour.

The move was made to hold hospitals accountable for poor sepsis care and slash the numbers of deaths in the UK – 52,000 a year.

Sepsis symptoms include rapid breathing, an abnormally high or low temperature, mottled skin and feeling dizzy or faint. Without prompt antibiotics, the condition can lead to multiple organ failure and death.

Ms Tuffield has made it her mission to raise awareness of the potentially fatal illness by working with national charities such as The UK Sepsis Trust – who she has raised £5,339 for so far.

Recalling the day she was sent home from hospital, Ms Tuffield said: ‘I was exhausted from the traumatic day I had.

‘After getting home I began to deteriorate, I became extremely lethargic, and I could not keep my head up and was vomiting continuously.

‘My mum contacted 111 and within ten minutes we had two paramedics at our home, who were extremely concerned that I had been sent home with sepsis.

‘They rushed me straight back to the hospital; if it was not for my mum, I would not be here today. I owe my life to my parents.’

Ms Tuffield had initially brushed off how she was feeling in March 2016 because she had been suffering with a chest infection.

However, within the space of two weeks she began having uncontrollable nose bleeds – roughly ten a day – which wasn’t a normal occurrence for her.

Ms Tuffield said: ‘The day before I got rushed into hospital by my GP, I had been driving myself to work in the early hours of the morning and I genuinely felt exhausted and I had this gut wrenching feeling that I was not okay.

‘I remember driving along and my eyes began to hurt and my vision went blurry.’

Ms Tuffield stopped the car, petrified that she was losing her eyesight, but managed to reach work.

She said: ‘Within half an hour of being at work I had crashed out in the back of the office room and I could not remove my sunglasses from my eyes because of the bright light.

‘My head was in so much pain. My co-worker dropped me off at my boyfriend’s mum’s house and I slept for the entire day, hoping that when I woke up, I would be feeling better. I was wrong.’ 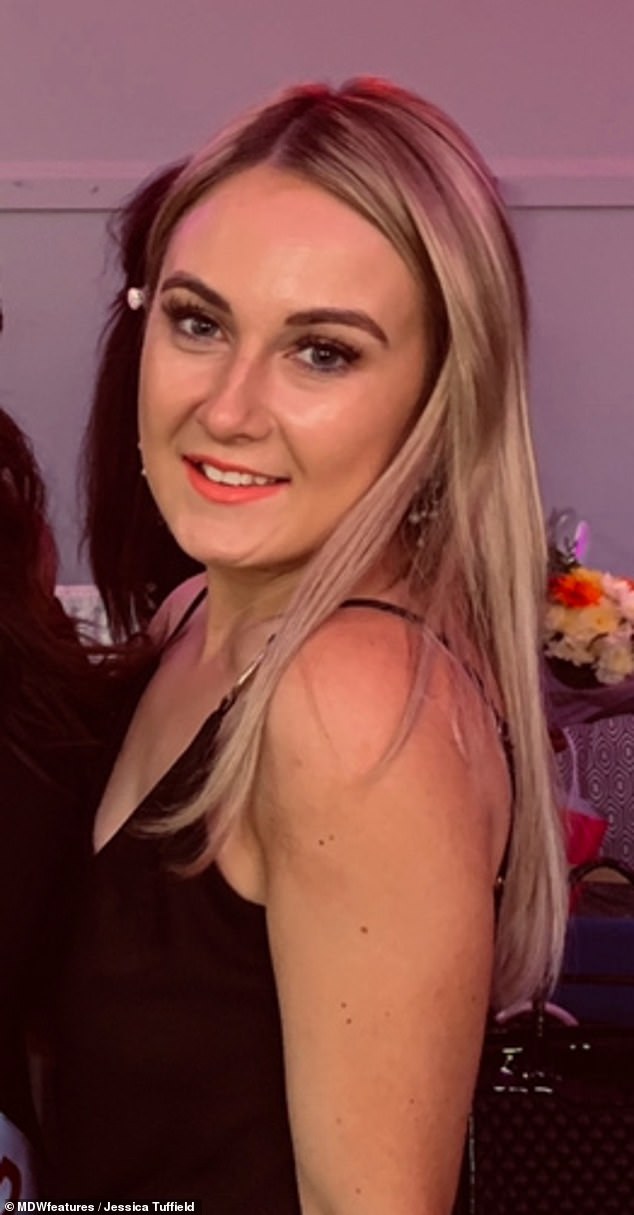 Ms Tuffield, pictured at an event, was scared when he doctor suggested she could have sepsis because she had never heard of the condition – also known as blood poisoning 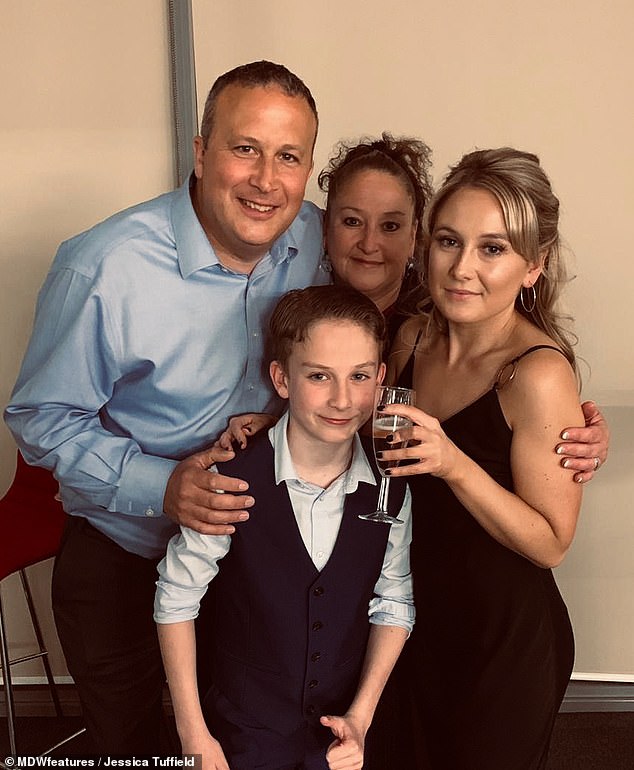 Ms Tuffield said: ‘If it was not for my mum, I would not be here today. I owe my life to my parents’. Pictured with her family including her mother and father 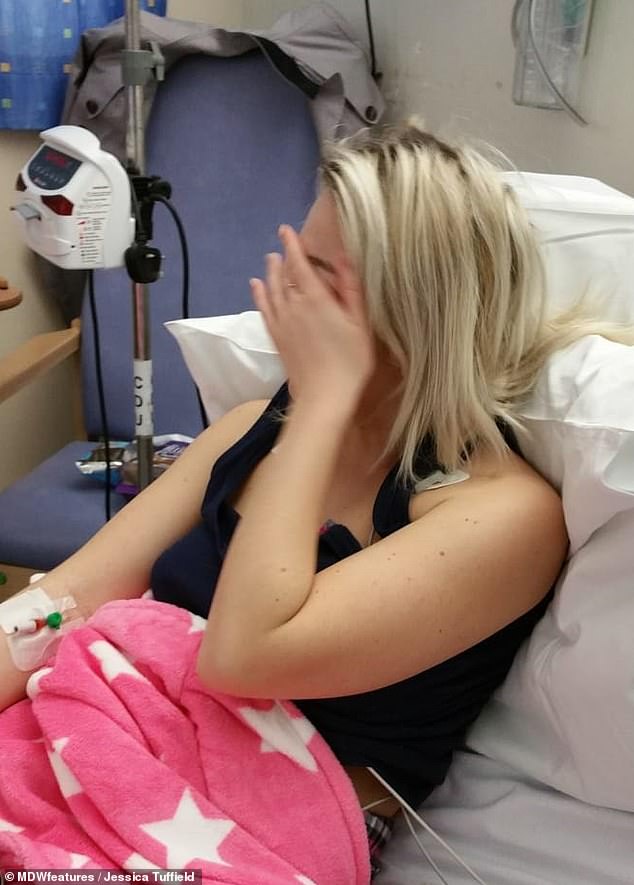 Ms Tuffield had initially brushed off how she was feeling in March 2016 because she had been suffering with a chest infection. Pictured in hospital having treatment 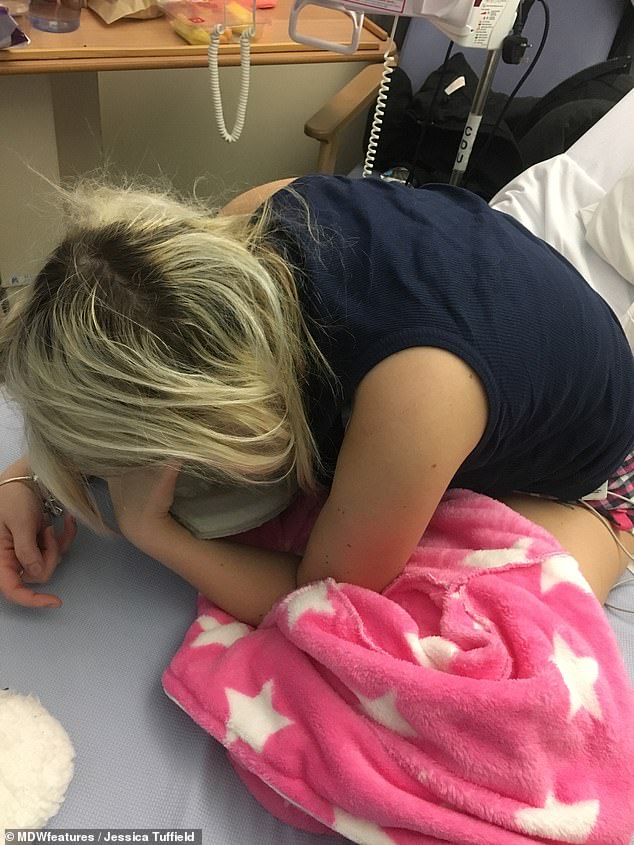 HOSPITALS COULD FACE PENALTIES IF THEY DON’T SPOT SEPSIS

Hospitals could be fined for failing to spot and treat the ‘silent killer’ sepsis, under guidelines imposed in March that were drawn up by NHS England.

Casualty staff have to be extra vigilant for symptoms of the life-threatening complication in patients at A&E and on wards.

Junior doctors were also told to tell consultants if patients diagnosed with sepsis haven’t responded to drugs within an hour, as part of the move.

The move formed part of a drive to provide quicker diagnosis and treatment of patients arriving at A&E with suspected sepsis and other killers such as heart attacks and strokes.

The guidelines, which took effect from April 1, came after a handful of hospitals had been criticised for failing to prevent sepsis deaths.

Dr Tim Nutbeam, of the UK Sepsis Trust, said: ‘We have been working with NHS England for the past three years to improve the recognition and management of sepsis in hospitals.’

The next morning, Ms Tuffield rung her doctor surgery and begged to be seen by her GP immediately.

She was instantly referred her the nearest hospital, Darent Valley Hospital in Dartford, where she remained for eight hours.

Ms Tuffield’s symptoms, including a high temperature and low blood pressure, causing her heart to race, were suspected to be caused by sepsis by both her GP and hospital staff, she said.

Ms Tuffield said: ‘Looking back, I remember my heart racing and beginning to panic, firstly because I did not know what sepsis was and I was unsure of why my doctor was looking so serious.

‘Secondly because I wanted to contact my parents and my partner however simply did not have the time or energy too.’

Cannulas – which are thin tubes that administer drugs – were inserted into the veins of both of her arms.

But for unknown reasons, Ms Tuffield claims she was sent home later that evening. Her health rapidly deteriorated.

She said: ‘That evening I was sent home from hospital after being there for eight hours. My arms were bruised from the cannulas which were placed in both my arms.’

Ms Tuffield claims she couldn’t keep her head up due to her low energy levels and was constantly vomiting. 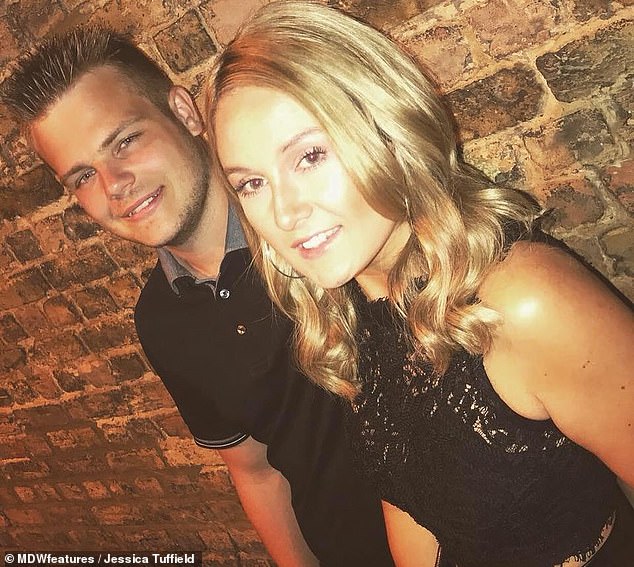 Ms Tuffield had been suffering with random nosebleeds ten times a day for two weeks in the lead up to her being rushed to hospital. Pictured with her boyfriend, Sam 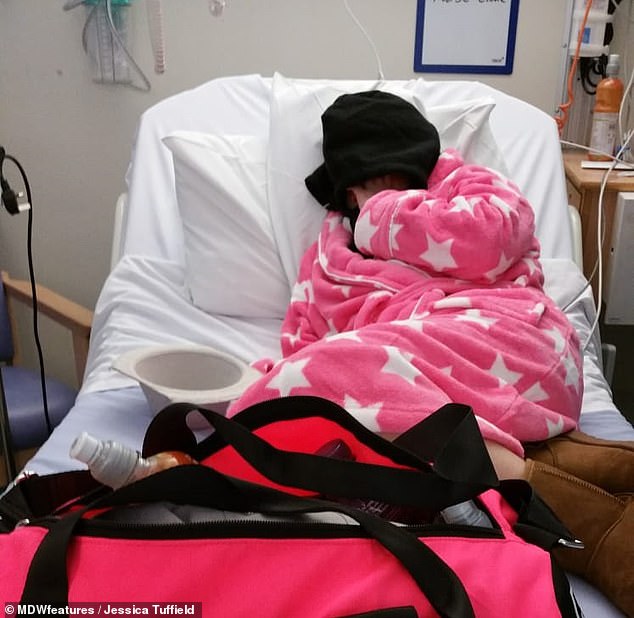 Ms Tuffield’s symptoms, including a high temperature and low blood pressure, causing her heart to race, were suspected to be caused by sepsis by her GP. Pictured being treated in hospital 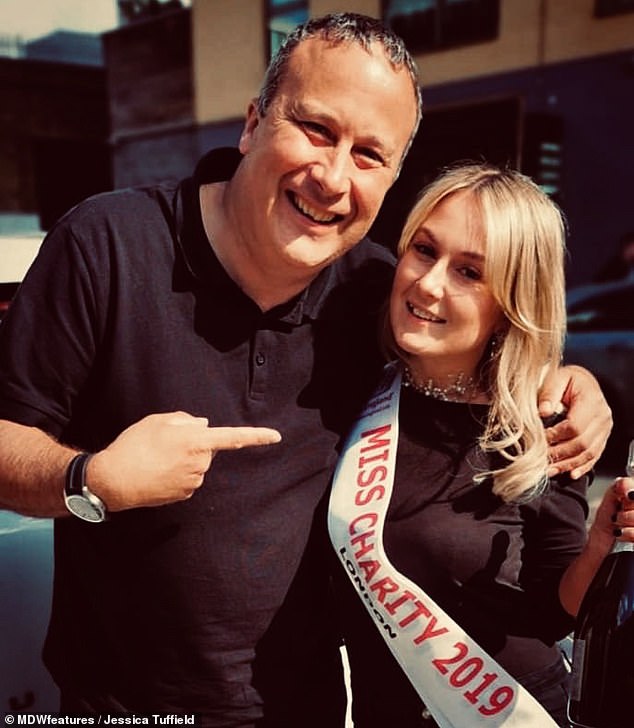 Due to her immune system becoming weaker, Ms Tuffield ended up contracting sepsis again six months after she survived the first time. Pictured with her father wearing her Miss Charity 2019 sash

Her mother called 111 and within ten minutes, two paramedics arrived at their home.

They were shocked that she was sent home from the hospital, so they rushed her back to the hospital where she was treated for sepsis on an intravenous line.

There are around 250,000 cases of sepsis every year in the UK, according to the UK Sepsis Trust.

Sepsis is the immune system’s overreaction to an infection or injury. Ms Tuffield’s sepsis was later found to have been caused by a chest infection.

She remained in the hospital for a further week and a half where she was treated with an IV drip.

Due to her immune system becoming weaker, she ended up contracting sepsis again six months later in November 2016, although it is unclear what the trigger was.

Evidence shows that over the following year after being treated for sepsis, some survivors are more prone to contracting another infection. When there is an infection, there is a risk of sepsis.

Because Ms Tuffield was able to spot the symptoms so quickly, she was treated with antibiotics. 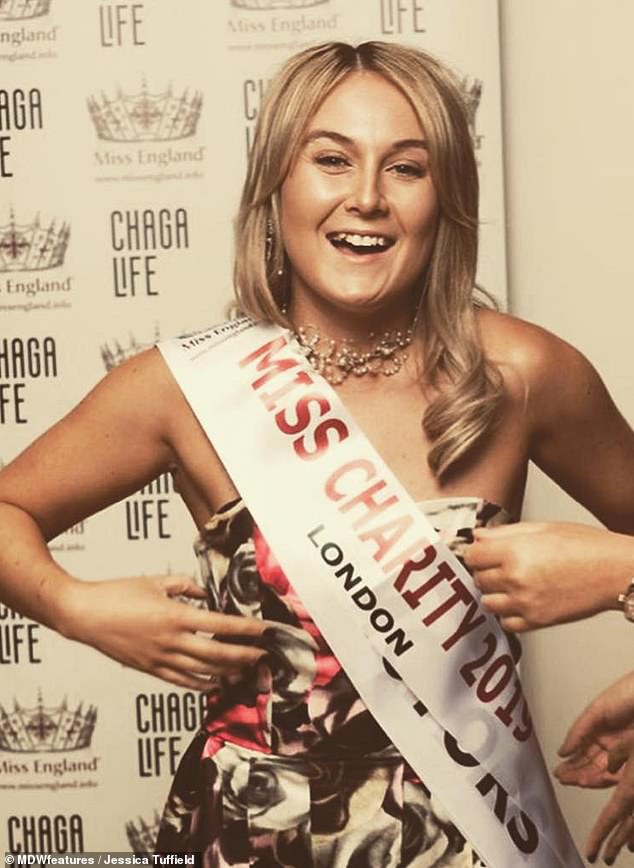 Ms Tuffield spent a couple of weeks in hospital recovering from sepsis. She fell ill with the complication again six months later and was treated with antibiotics. Pictured raising money 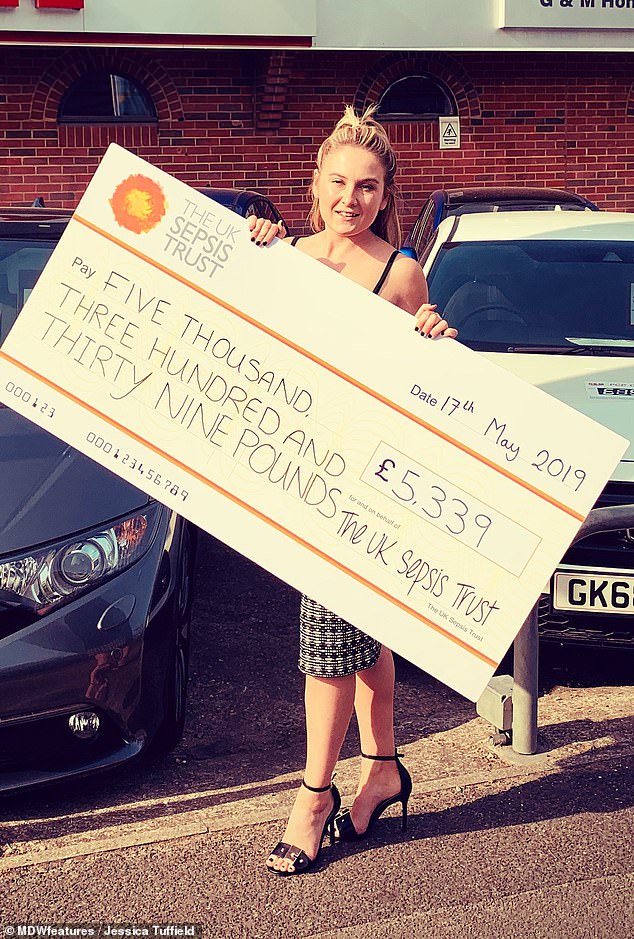 Ms Tuffield said: ‘I have learned that there is nothing more precious than life’. She has made it her mission to raise awareness of sepsis with charities such as the UK Sepsis Trust – who she has raised £5,339 for so far (pictured, with a cheque for the charity)

The condition is known as the silent killer because it is notoriously difficult to diagnose and patients’ risk of death significantly increases for every hour they are not given antibiotics.

Staff are being told to be extra vigilant for symptoms of the condition in patients, after some hospitals have recently been criticised for failing to prevent sepsis deaths.

Ms Tuffield has dived into fundraising and has been named Miss Charity London 2019, as well as becoming a Miss England semi-finalist.

Ms Tuffield said: ‘Having sepsis and being a survivor has one hundred percent changed my outlook on my health and lifestyle.

‘I have learned that there is nothing more precious than life and not only from my own experience but from the other stories I have been told from those who are not so fortunate, that it is important to take each day as it comes and to never leave it if you’re feeling unwell.

‘Most importantly that sepsis affects everyone differently and we all have different symptoms; the most important question we should ask is, ‘Could it be sepsis?”

A spokesperson at Dartford and Gravesham NHS Trust, which runs Darent Valley Hospital, said: ‘Sepsis is a serious medical condition that our clinicians and processes are designed to identify and treat as early as possible.

‘As an organisation we were concerned to hear of Jessica’s allegations as we were not aware of her concerns regarding her care before now. We would welcome a meeting with Jessica to discuss any concerns that she may have.’

Some 44,000 people die from sepsis every year in the UK. Worldwide, someone dies from the condition every 3.5 seconds.

Sepsis has similar symptoms to flu, gastroenteritis and a chest infection.

Symptoms in children are:

Under fives may be vomiting repeatedly, not feeding or not urinating for 12 hours.

Anyone can develop sepsis but it is most common in people who have recently had surgery, have a urinary catheter or have stayed in hospital for a long time.

Other at-risk people include those with weak immune systems, chemotherapy patients, pregnant women, the elderly and the very young.

Treatment varies depending on the site of the infection but involves antibiotics, IV fluids and oxygen, if necessary.