The woman arrested in connection with sexual assaults and aggressive behaviour on a train, filmed last night, can be revealed as Zadie O’Connell, 24, from Basildon in Essex.

O’Connell’s social media accounts reveal the 24-year-old bragged a month ago of having ‘p***ed in a mates garden’ and of being fined for throwing up in the back of a taxi.

A fellow passenger on the London to Essex c2c, who filmed O’Connell’s ‘upsetting’ behaviour, commented on his own video: ‘Smacked me in the face twice. Grabbed security guard by the nuts.’ 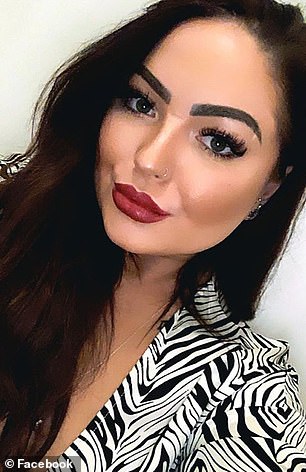 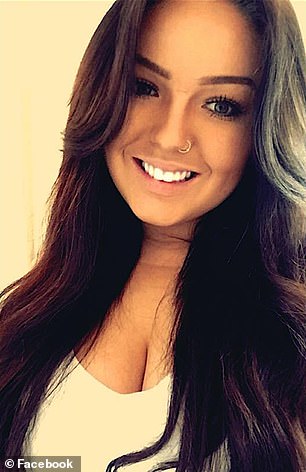 Zadie O’Connell, 24, from Basildon in Essex, 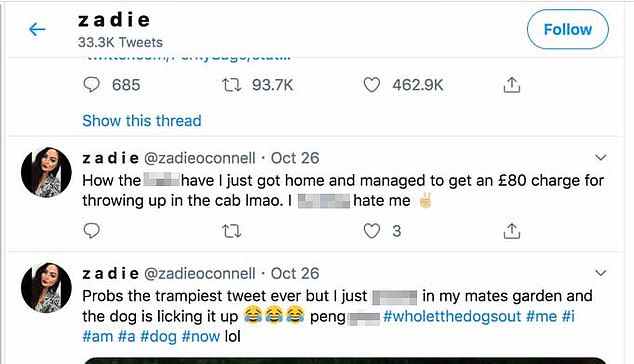 Near her home in Basildon today one near neighbour told MailOnline: ‘I went to the same school as her, she was actually a nice girl. ‘She’s quite a character now.’

On Monday she launched a foul-mouthed rant at courier company Hermes, tweeting: ‘@Hermesparcels is this some sort of joke? This was meant to be delivered yesterday and now I get an email with a fake signature of mine? Where the f*** is my parcel.’

And in late October she posted to the web: ‘How the f*** have I just got home and managed to get an £80 charge for throwing up in the cab lmao. I f***ing hate me.’

The same evening she wrote: ‘Probs the trampiest tweet ever but I just p***ed in my mates garden and the dog is licking it up’. 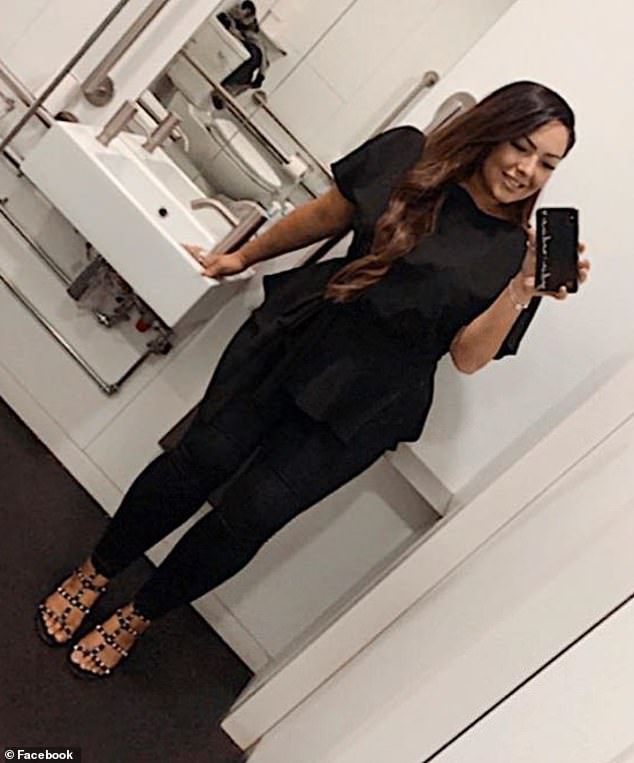 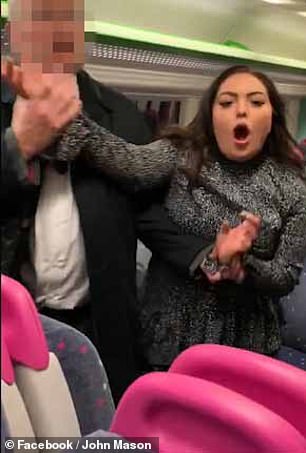 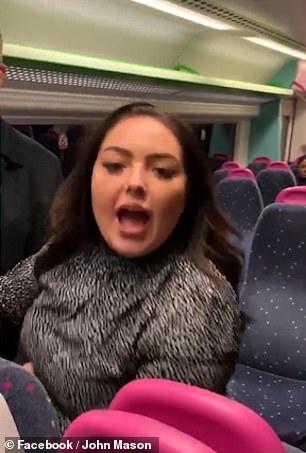 The bizarre incident, which happened on a c2c train between London and Essex at 7pm yesterday, was recorded by fellow commuters who urged the woman to stop harassing other passengers

O’Connell’s outburst last night was recorded by fellow commuters who urged her to stop.

She was arrested on suspicion of two counts of sexual assault and four counts of common assault.

John Mason, from Stanford-le-Hope, Essex, who filmed the encounter, said: ‘I was quietly minding my own business yet this girl was upsetting everyone and at the end of the day you have to take a stand.’

The video shows O’Connell confronting a man sat on the train while appearing to straddle him, before turning and pointing to another woman and shouting: ‘Oh my god you thought you were going to f****** say something and that it mattered.’

She then puts her arm around the man who stands up to try to avoid her, while she continues to continue her rant.

Passengers are seen trying to reason with her, saying: ‘Calm down’ but she then turns her attention to Mr Mason, filming the incident.

She sticks her face in the camera and says: ‘Yeah film me what, yeah go on. What. What. What the f*** are you going to do.’

A man then tries to pull her back, but she once again tries to confront the first man she initially appeared to straddle.

However, another man steps in to try and stop O’Connell. The man argues with her, saying: ‘Listen girl I don’t give a f*** you’ve had too much to drink.’

She then approaches another man and say: ‘come on then take me!’ before she approaches Mr Mason once more, appearing to ask for a fight. 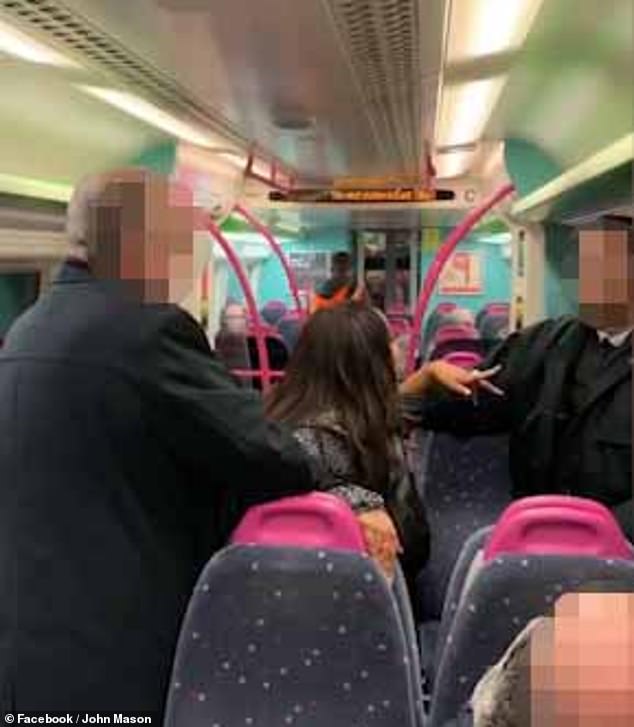 A man tries to pull the woman back, but she once again confronts the first man 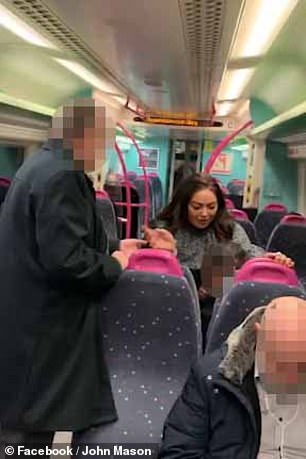 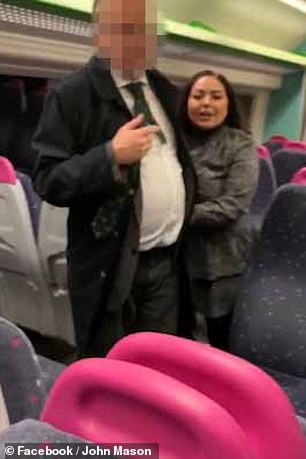 The woman tell approaches another man and say: ‘come on then take me!’ before she approaches John once more appearing to ask for a fight: ‘What. F****** take me’

Mr Mason, 49, commented on his video saying: ‘Smacked me in the face twice. Grabbed [a] security guard by the nuts. Sorry but I’ve been here before and nothing happened so I walked away.’

Jo Hurt responded online: ‘God if I was on that train and she was doing that to my hubby she would of been out the window while the train was still moving.’

Ayla Hasan added: ‘I saw her when I got to the station, screaming and shouting on the platform and making a scene. What an embarrassment.’

Colin Bright wrote: ‘Silly season has well and truly started! I agree with the comments about if this was a man they’d be crucified on here… she’s lucky no one gave her a right hander. Oh well she will be feeling it tomorrow.’

A spokesman for British Transport Police said a 24-year-old female passenger is in custody after being arrested at Tilbury.

He said: ‘A 24-year-old woman is in custody this afternoon, after being arrested in connection to an incident on board a C2C train yesterday evening.’

Heart check that could reveal if YOUR teen has a hidden problem
Rush-hour travel chaos after fire next to railway tracks causes cancellations and delays to trains
Woman, 52, who chased her ex-partner with a five-inch knife is spared jail
Coronavirus UK: BA flies 2.5m pieces of PPE from China
Julian Assange talks of his illness in slurred prison phone call
Australian mother pleads to bring her baby home after she contracts deadly disease in Phuket
Mourinho melee as United concedes late at Chelsea
First interstellar object to enter the solar system 'Oumuamua' is NOT an alien spaceship