An aspiring dancer who is now battling cancer for the third time has revealed she felt like a ‘disgrace’ for feeling weakened by the growth of her disease.

Mia Zandi-Amarloei, 22, from Beccles in Suffolk, was first diagnosed with cancer in 2016, when doctors discovered she had a Grade 4 Epithelioid Glioblastoma on her brain.

A year later after her initial tumour had been ‘100 per cent’ removed, Mia’s cancer returned – but thankfully, she was able to win ‘two frightening battles’ with the disease.

But now, the dancer is sadly suffering from cancer for the third time and has developed another tumour at the base of her spinal cord.

‘Knowing that my tumour has grown has made me feel weak,’ she told FEMAIL. ‘I’ll be honest and admit that I want to slap myself round the face and think of myself as a disgrace.’ 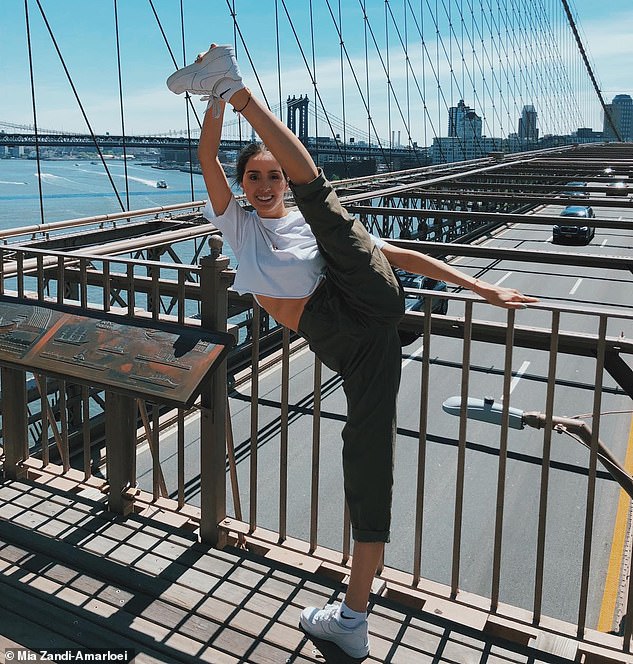 Mia Zandi-Amarloei, 22, from Beccles in Suffolk, was first diagnosed with cancer in 2016, when doctors discovered she had a Grade 4 Epithelioid Glioblastoma (Pictured: Mia in New York) 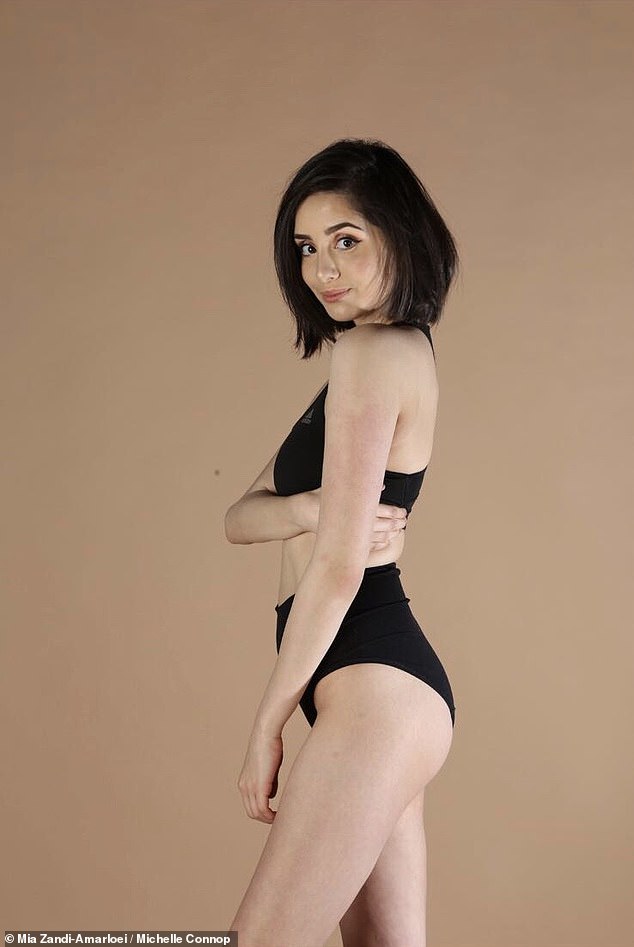 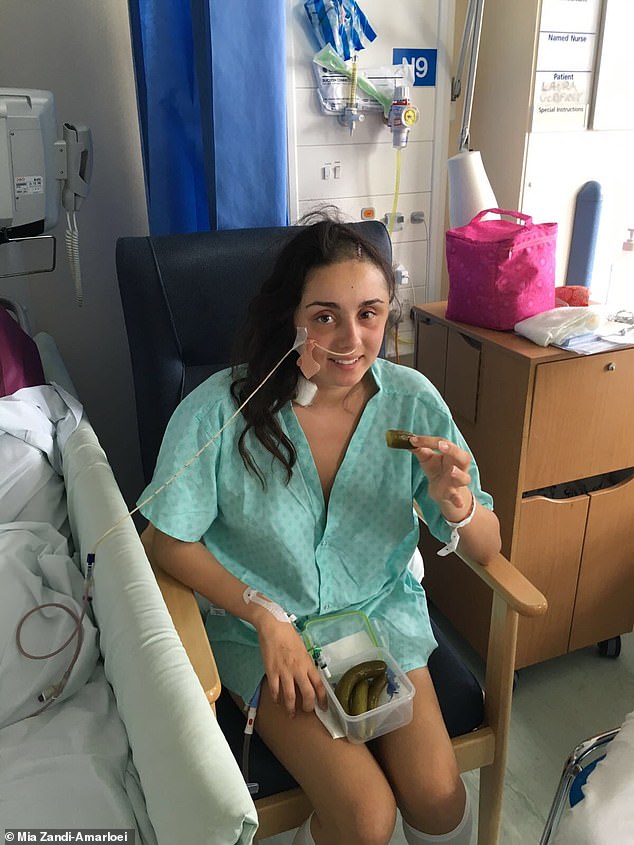 In June this year, doctors discovered Mia’s ‘usual grade four cancerous tumour’ had ‘dribbled down’ her spinal cord and ‘clung on tight’ to the nerves around the base of her spine (Pictured: Mia in hospital after her first surgery in 2016)

Mia received the devastating diagnosis in June after her sister Danielle rushed her to the James Paget Hospital in Great Yarmouth when she complained of back pain.

Writing on her blog, Mia told how she ‘just had a feeling’ that something wasn’t right as she couldn’t sit down or relax due to the pain.

‘The moment I got to the hospital I was taken in for X-rays and bloods,’ she penned. ‘After a painful wait, a lovely consultant walked into the little cubicle that I was sat in and my heart started to race.’

‘I was told that “something” had been spotted on my spine and they had to get me to Addenbrooks Hospital in a blue light ambulance, ASAP.’

Mia said from this moment, her life became somewhat of a ‘blur’.

Doctors had discovered her ‘usual grade four cancerous tumour’ had ‘dribbled down’ her spinal cord and ‘clung on tight’ to the nerves around the base of her spine. 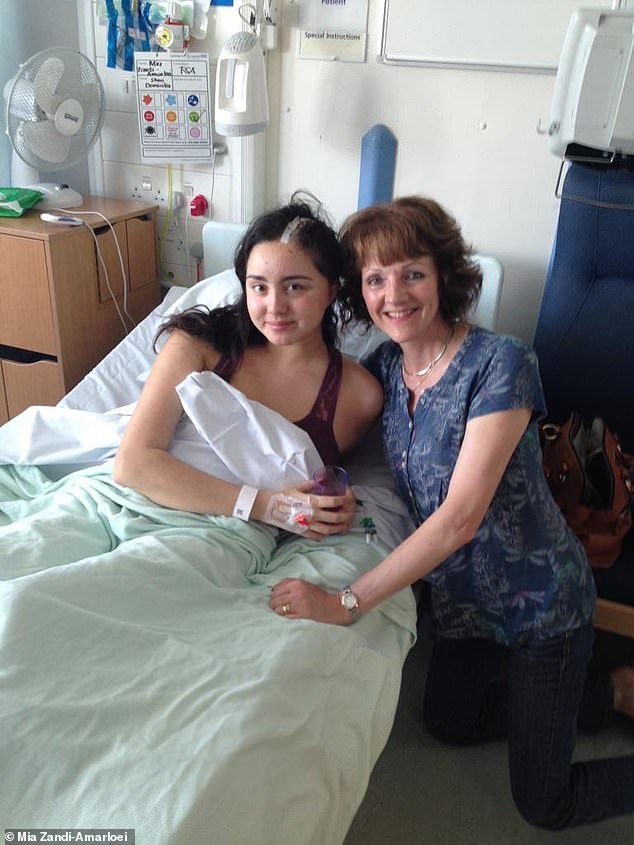 The beauty said that although cancer has impacted her life ‘hugely’, and she currently struggles to walk, she is determined to take ‘keep her spirits high’ (Pictured: Mia and her aunt Beth)

Mia explained that this left her with an ‘agonising pain’ and ‘in the state of mind’ where she ‘would rather quit the riot and just let it eat me alive’.

The aspiring dancer was first diagnosed with a Grade 4 Epithelioid Glioblastoma in June 2016 when her brain bled and she felt a pain she hopes she ‘never will again’.

WHAT IS AN EPITHELIOID GLIOBLASTOMA?

Glioblastomas are malignant tumours largely found in the cerebral hemispheres of the brain.

Glioblastoma can be difficult to treat, but often respond well to radiation and chemotherapy.

She had been six weeks away from beginning her training at the Laine Theatre Arts college in Epsom, for which she had been awarded a Dance and Drama Award at the time.

‘I remember the moment like it was yesterday,’ she told FEMAIL. ‘A serious dagger whipped my head – a feeling I really can’t describe.’

‘I’ve certainly never felt that pain again and pray that I never will. It was excruciating and I knew I had to get to hospital and fast.’

Mia continued: ‘My boyfriend, at the time, rushed me to The James Paget Hospital – at this time I didn’t know who people were or what was happening. I remember being sick out of the window but that’s all.

‘The next time I woke up was five days later in intensive care, at Addenbrooks Hospital, and my life had completely changed.’

In the five days she had been unconscious, Mia had undergone major surgery to remove part of her skull to let the blood push her her brain and allow it to swell without it causing damage.

‘There was a doubt that I was ever going to wake up again but if I did there may be issues such as brain damage, speech impediment, being paralysed or something,’ she said. 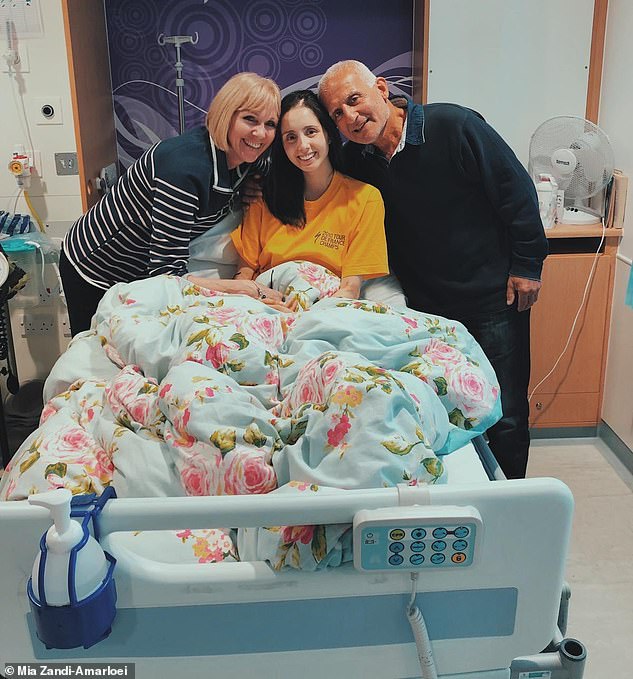 A year later, after her initial tumour had been ‘100 per cent’ removed, Mia’s cancer returned, but thankfully she was able to win ‘two frightening battles’ with the disease (Pictured: Mia with her mother Sharon and her father)

But in just nine days, Mia was able to head home, and her cyst had been identified as a rare, malignant brain tumour.

Just two months later she underwent surgery to remove ‘100 per cent’ of the tumour and fit a ‘special titanium plate’ in her skull.

Mia was then accepted onto a drug trial which she hoped would stop her cancer growing, and, a year later, she was able to take her place at Laine Theatre Arts college.

The dancer said: ‘After a year of mending I tried to give “life” another go. Therefore, I took my deferred place at Laine Theatre Arts.’ 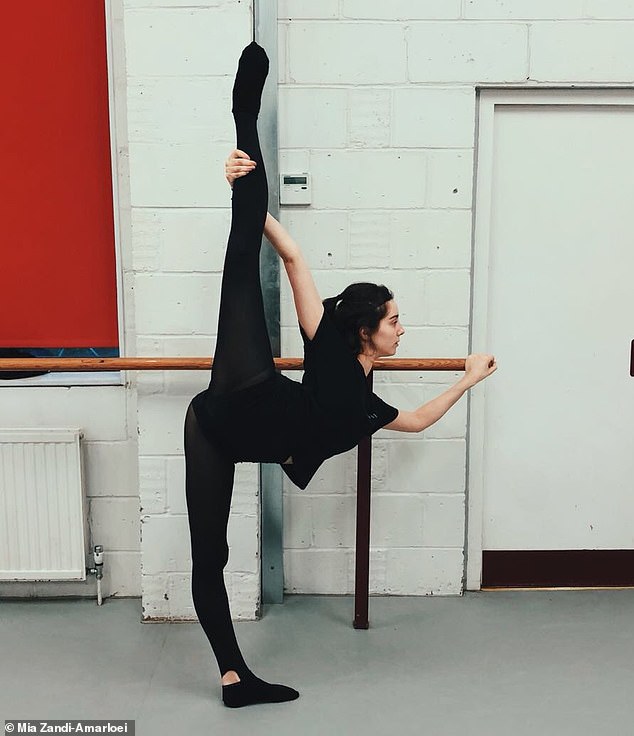 Mia’s partner Patrick Wnuk has now launched a fundraiser on GoFundMe to help her enjoy life, make ‘great memories and see more of the world’

‘Dancing at Laine was a dream! I was officially a “Lainey”! A few months went by, still having to have days off for tests.’

‘At one point my liver began to have some issues so I was told to have six weeks off. And that’s all it took – six weeks for the killer to grow again.’

Sadly, Mia’s cancer had returned, but she was able to rejoin the drug trial and eventually managed to ‘kick away’ the aggressive tumour again.

‘I left dancing,’ she said. ‘I decided that I wanted to remember me as the dancer I used to be: full of confidence and happiness.

‘I wanted to remember dancing when I was high and living the dream. So I quit with the ambition that hopefully one day ill find something new fighting for.’ 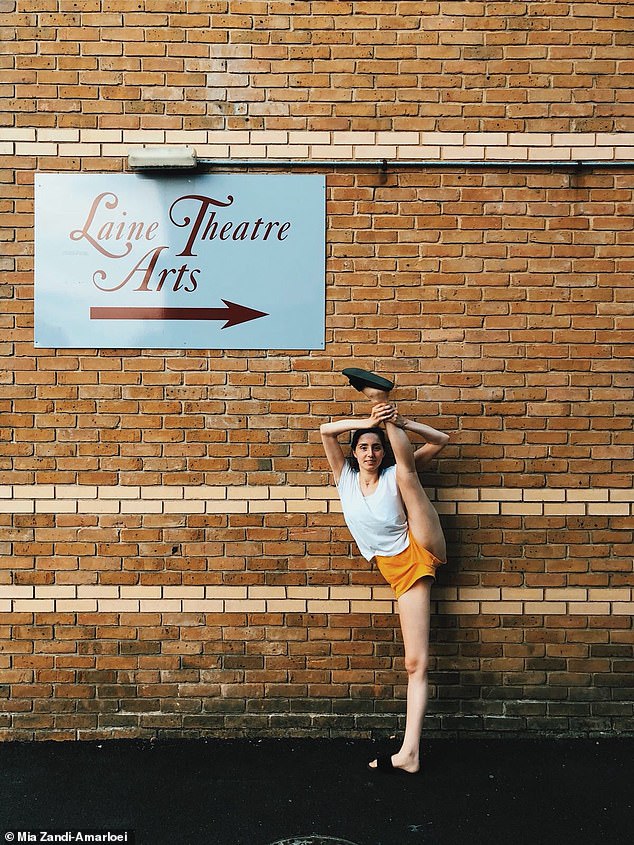 The beauty had dreams of dancing professionally on a cruise ship, but eventually decided to give up her lifelong hobby (Pictured: Mia at the Laine Theatre Arts college in Epsom)

But Mia’s battle with cancer didn’t end there, and she is now fighting a third bout of the disease.

‘The tumour from my head has said hello for its third time, but also trickled down my spine and settled down there, she explained.

‘Fighting cancer twice was hard but it isn’t going to beat me. Just have to keep my fingers crossed and believe in myself.’

She added that although cancer has impacted her life ‘hugely’, and she currently struggles to walk, she is determined to take ‘keep her spirits high’.

‘Knowing that I have a third [tumour] to destroy is very hard to believe, but I can do it, and I will,’ said Mia.

‘I have to keep my spirits high and remember that if you can destroy something twice then the third time’s just a piece of cake’.

The dancer also revealed her cancer made her feel guilty for not being able to provide for herself.

‘It disgusts me that I can’t even buy a loaf for my family,’ she said. ‘I hate that at 22-years-old I need my parents the same as I needed them as a baby.’

‘Cancer has made me feel disgusted in myself – I wanted my family to be proud of me by 21 but instead they have to help me to get to bed, take me to hospital multiple times a month and be my overall support 24/7’.

‘We know Mia would not like to dwell and get upset on her situation and instead, enjoy life, make great memories and see more of the world,’ he wrote on the page.’

‘This is where this GoFundMe page may come in useful and help out with things such as the ridiculously expensive medical travel insurance, other experiences Mia has dreamt about and simply to try and make her life a little more colourful during these not so colourful times.’

'Eyeborg' filmmaker has a video camera in his prosthetic eye that can record for up to 30 minutes
One of the world's most famous circus tamers is mauled to death by four tigers
Tommy Robinson sparks fury after wading into refugee bullying scandal
Businesswoman, 44, shares pictures of horrible 'mushy' food on British Airways flight
Brexit: May admits she had clash with Juncker Brussels summit
Germany's new coronavirus cases fall to lowest in six weeks with 1,018
Harry Redknapp reveals he was sacked by Daniel Levy in a similar way to Mauricio Pochettino
Face masks may have to be worn in ALL public places including offices and other workplaces