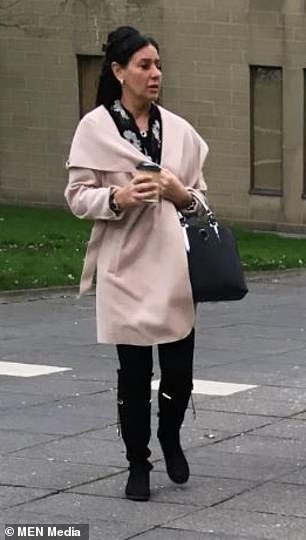 Denise Wood, pictured outside Kirklees magistrates court, was pulled over by police at 3am on November as she drove her Vauxhall Tigra in Heckmondwike

A woman got behind the wheel while three times over the limit to get away from her ex-husband who was stalking her, a court heard.

Denise Wood was pulled over by police at 3am on November 24, as she drove her Vauxhall Tigra in Heckmondwike, West Yorkshire, because of issues with her driving.

The 45-year-old then provided a positive roadside breath test after admitting to the officers that she’d had a lot to drink, prosecutor Alex Bozman said.

Erica Topham, mitigating at Kirklees Magistrates’ Court, explained that her client had been married for 15 years when she discovered that her husband had been leading a secret double life.

He had another wife and they had children together and despite claiming that he would divorce her he failed to do so.

Mrs Topham said: ‘She said that enough was enough and walked away from it.

‘It ended up with him stalking her to the point that she had to take out a non-molestation order.’

After she was arrested and taken to Dewsbury Police Station further breath tests showed that she had 105 microgrammes of alcohol in 100 millilitres of breath.

This is three times the legal limit of 35 microgrammes.

Mrs Topham explained to magistrates that on the evening in question her client had an unpleasant encounter with her ex-husband the evening she was stopped by police.

She said: ‘Her friend took her out one night to the pub and he started coming round to the house and trying to get in.

‘They decided to go from there to a friend’s house, got two miles down the road and were stopped by police.’

Chairman of the bench Brian Hughes told Wood: ‘We can not ignore the very high level but we’ve taken into account everything that has been said and feel that little benefit can be gained from a community order.’

Instead magistrates fined her £200 and ordered her to pay £85 court costs plus £30 victim surcharge.

They banned Wood from driving for 26 months.

Mr Hughes added: ‘Hopefully we’ve been able to help you, please help yourself.’

Magistrates were told that Wood, from Dewsbury, West Yorkshire, had no previous convictions.