A woman who got leukaemia twice as a teenager has returned to work in the same hospital which treated her – but she now has cancer for a third time.

Catherine Pointer, now 26, is a cancer researcher at Southampton General Hospital, where she was twice treated for leukaemia at the ages of 14 and 17.

Miss Pointer was so inspired by doctors treating her for the disease it sparked her into embarking on a career saving other cancer patients’ lives.

Now she has returned to the hospital but this time as a scientific researcher and is on the cusp of becoming a doctor as she completes her PhD.

The biomedical scientist said ‘cancer dominated my life so much but it came to be the thing that interested me most and the only thing I wanted to choose as a career’.

However, Miss Pointer is juggling her new career with yet another battle with cancer – she has been diagnosed with a form of skin cancer as a direct result of the treatment she previously received. 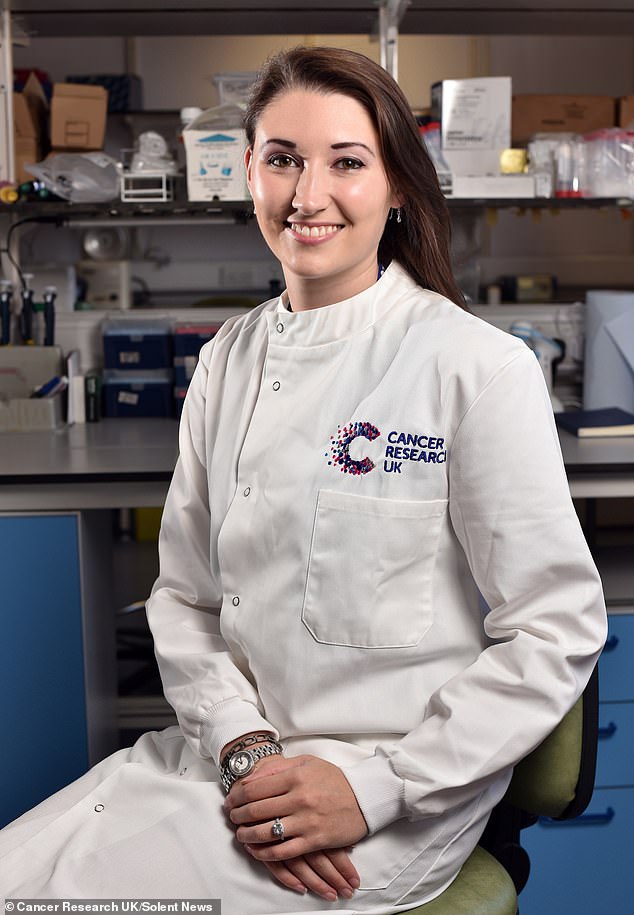 Catherine Pointer, now 26, had leukaemia twice as a teenager but has now returned to the hospital where she was treated to work as a researcher at the Cancer Research UK Centre

Despite this, next year Miss Pointer will marry her Army Captain fiancé Ash Dale, 26, in a dream wedding.

Instead of gifts, their wedding guests have been asked to help fund IVF treatment as Miss Pointer will struggle to have children of her own as a result of her battles with leukaemia.

The soon-to-be-doctor is set to complete her PhD at the Cancer Research UK Centre in Southampton, Hampshire.

The centre is based at Southampton General Hospital, where Miss Pointer received treatment as a teen but now works to fight cancer.

Miss Pointer, from Fareham, Hants, said: ‘Cancer had already dominated my life so much but it came to be the thing that interested me most and the only thing I wanted to choose as a career.

‘I don’t want the next 14-year-old girl to go through what I’ve had.

‘Being back in Southampton but now as a cancer researcher rather than a cancer patient feels like the exact right place for me to be, like it’s gone full circle.

‘Once, when my parents dropped me off at the hospital, they said how much they hated being back at the place where I was ill.

‘But I don’t see Southampton General as the place where I was ill – it’s the place that made me better.

‘I’m no longer the sick young girl on a ward, now I walk around with a Cancer Research UK lanyard around my neck knowing that what we do every day is going to help people with cancer in generations to come.

‘I want to see the day that people going through cancer can come through the other side and be able to live, not just survive with a lifetime of side effects from the treatment they had.

‘People shouldn’t have to choose survival at the expense of being able to live – there has to be a better outcome than that.’

When she was a teenager she was on a summer holiday with her family when she became very unwell and lost a significant amount of blood.

Within two weeks she had lost a dramatic amount of weight and could barely stand without passing out and urgent blood tests confirmed she had leukaemia and needed to begin six months of intensive chemotherapy.

After four cycles of treatment she went into remission but was later diagnosed with leukaemia as she began her A-levels.

She underwent a gruelling total body irradiation as they killed off her own bone marrow before carrying out a transplant.

Miss Pointer said: ‘I was scared – I knew that if it failed I was accepting the fact I would die very young.

‘I remember lying on my hospital bed and telling my mum I just couldn’t do it anymore. I was exhausted but couldn’t sleep, it took everything I had just to open my eyes.

‘I could feel everything shutting down inside me. I looked in the mirror and didn’t recognise the person I saw.’

Miss Pointer made a full recovery and went on to complete a biomedical science degree at Sussex University and now works among an elite group of scientists improving treatments and survival rates for head and neck cancer patients.

Attending her wedding to her Sandhurst-based husband-to-be will be her much-loved consultant who treated her and his since retired and moved abroad.

Miss Pointer said she was inspired during her treatment. She said: ‘Even before I became ill I liked the idea of being a scientist but without doubt, my own experience convinced me.

‘I may have been young when I was diagnosed but I still had so many questions.

‘I remember my consultant taking me into the labs and showing me my cells and bone marrow to try and help me understand what was wrong with me and how they were trying to make me better.

‘I now know I can’t stop myself getting cancer again, but by working at CRUK Southampton I can make sure I’ll be ready for it next time. That’ll help a lot of other people along the way too.

‘I did work experience at Southampton and really liked what they are doing there – it feels like it is really going to make a difference.

‘I started my PhD in cancer research wanting answers about what had happened to me.’

And she added: ‘Now I’ve developed a mild skin cancer as a direct result of the treatment I had, it’s about self-preservation.

‘All I want is to grow old with my soon-to-be husband and be able to raise a family.’

After five husbands, ex-newsreader Jan Leeming, 77, reveals her libido is still there
RICHARD KAY: If Prince Andrew can sit down with the BBC, will he face questions from the FBI?
Paris clean-up begins: Graffiti is removed from Arc de Triomphe after protests
DVLA says these are the cons being used by fraudsters to trick motorists into handing over money
Harris, L3 Technologies nearing agreement to merge -source
Massive landslip in Russia ‘was caused by a meteorite or massive BOMB’ locals claim
Boris Johnson leads the condemnation of Met's threat to PROSECUTE the Mail on Sunday
Video shows ANOTHER driver on wrong side of road near spot where teenager Harry Dunn was killed