The police watchdog is investigating after it emerged that the car driven the wrong way down the M40 before a crash killed three people was involved in another smash just five days earlier.

Shocking dashcam footage showed the Subaru Forester towing a caravan south in the outside lane of the northbound M40 in Oxfordshire on Sunday.

The Subaru’s driver and passenger, both in their 80s, died in the subsequent crash, along with a 32-year-old today named as former Army engineer Stuart Richards, from Stockport, Cheshire.

It emerged today that the Subaru had been involved in another crash five days earlier in nearby High Wycombe, prompting a police watchdog investigation. 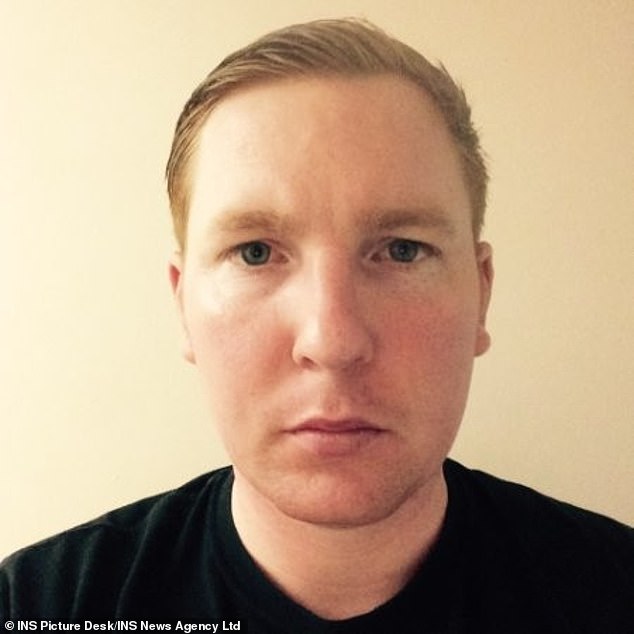 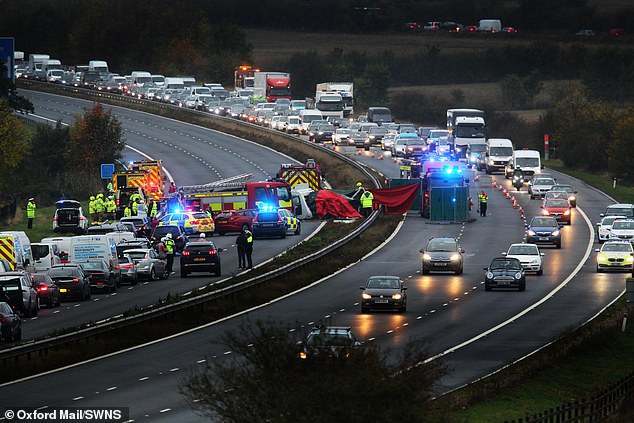 According to his LinkedIn page, crash victim Mr Richards was in the Army for nine years before joining construction firm Persimmon Homes and then developers Emerson Group.

Mark Cook, regional managing director of Persimmon North West, said today: ‘Stuart only worked with us at for a short time, but everyone in the team is shocked and saddened by this tragic news. Our thoughts are with his family.’

A spokesman for Thames Valley Police said today: ‘We have made a mandatory referral to the IOPC in relation to the fatal collision, due to previous police contact.

‘On 10 October this year in High Wycombe, a report of a damage-only road traffic collision involving the Subaru Forester was made to the Force. The IOPC will now make a decision as to whether they will carry out an investigation.’

Footage from other vehicles on the motorway showed cars swerving out of the way as the Subaru and its caravan came careering down the motorway in the wrong direction.

It is believed to have travelled the wrong way between junctions seven and six – a distance of five miles – before the crash.

It then collided with a Ford Fiesta and a Ford Mordeo, which was being driven by Mr Richards.

The police spokesman added: ‘The driver and a passenger of the Subaru, both aged in their eighties, died. They are yet to be formally identified at this time.’ 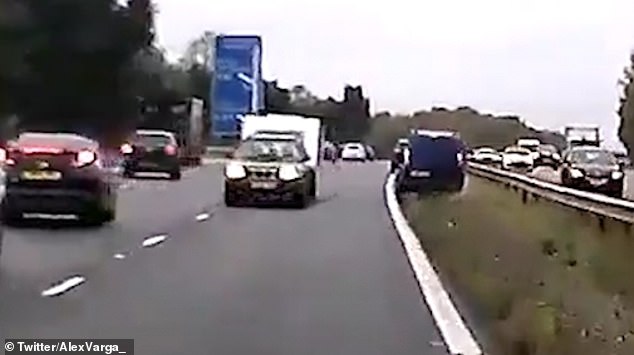 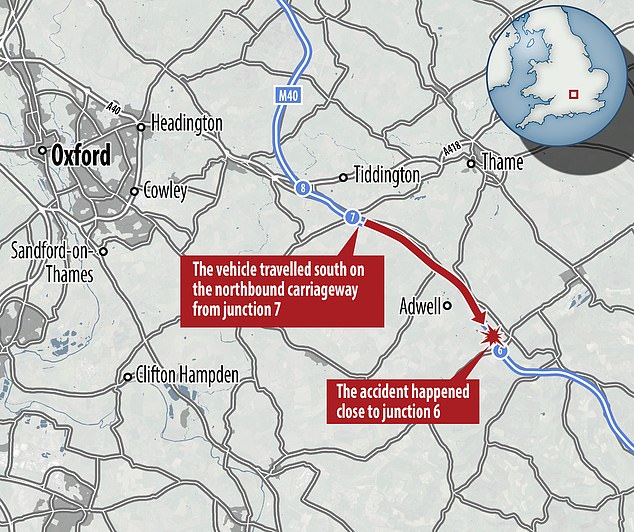 Describing the moments before the accident, witness Sonia Thomson, from Staffordshire, said she was driving in the outside lane of the motorway when the realised the Subaru ‘was just heading towards me’.

Ms Thomson, who works as cabin crew for British Airways, told the Press Association the car was ‘going so fast’ and ‘it was almost past me in the blink of an eye’.

Did you see the crash in High Wycombe on the 10th? Email tips@dailymail.com

The crash happened shortly after her encounter with the car.

‘Someone must have been looking after me because 10-20 seconds later and that could have been me,’ she said.

Ms Thomson added that the incident ‘doesn’t make sense’ as she believed someone who accidentally drove in the wrong direction on a motorway ‘would get yourself to the hard shoulder and call for help’.

He added: ‘I’ve seen a lot of things in my 50 years on the road, but I’ve never seen a caravan coming the wrong way up the M40.’ 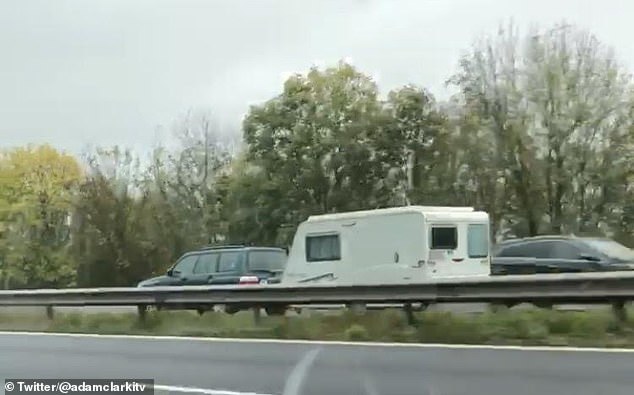 Others who saw the chaos took to Twitter to describe what happened.

Liz Hindmarsh posted: ‘My husband had to swerve into the middle lane otherwise he’d have been hit.’

Before news of the deaths was announced, Oliver Hayes wrote: ‘We also had to swerve, seemed at least 70mph driving head on in our lane at junction 8… did not look accidental.

‘Called the police who said they’d had multiple calls by that time. Scary stuff hope no fatalities but looked inevitable the way they were driving.’

Speaking earlier this week: Senior investigating officer Sergeant Beth Walton, from the Serious Collision Investigation Unit of Thames Valley Police, said: ‘We are in the early stages of the investigation, in which sadly three people died, and our thoughts are with their families.

‘We are in the process of contacting witnesses who provided a report to us and are grateful for their support.

‘I would ask anyone who has footage not to share it and to remove it from social media out of respect for the families and friends of the people who died.’

Fresh evidence including suspects' names that could nail the IRA honeytrap gang
NHS staff warned not to wear uniforms outside work and hide ID badges after muggings
Co-founder of South Korea’s biggest pornography website is jailed for revenge porn videos
Sajid Javid says he is NOT planning to change house buying rules
Cottingley Fairies hoax images go under the hammer
NASA makes history as two women astronauts complete FIRST EVER all-female spacewalk
Bullied accountant stole £170,000 from bosses and spent it in ONE weekend on cocaine and prostitutes
PETER HITCHENS: Don't be duped by cheery Boris Johnson... it's your duty to be glum