Nigel Farage clashed angrily with a BBC journalist this morning, accusing Andrew Marr of being ‘in denial’ of a ‘sea change’ in British politics, for focusing on his previous statements.

It made for uncomfortable viewing as the two men talked across each other, the interviewer refusing to stop asking questions and the politician angrily denouncing the exchange as ‘ludicrous’.

Arguing that examining its leader was the ‘only way to look at the Brexit Party in the round at the moment’, Mr Marr asked: ‘Do you still want to replace the NHS with a private insurance system?’

Mr Farage replied: ‘I never did, I would like to take the burden off the NHS.’

He added quickly: ‘But if you want to go back, this is really very boring isn’t it.

‘All you want to do is go back to stuff from years ago. Why don’t we talk about now in British politics.

‘Why don’t we talk about the sea-change that is going on out there’, said Mr Farage, precipitating a tense several minutes as broadcaster and politician spoke across each other and both refused to back down.

Mr Marr put a string of Mr Farage’s previous statements to him, on bringing in health insurance to the NHS; saying that worrying about global warming was the ‘stupidest thing in human history’; on relaxing laws on gun control; being uncomfortable hearing foreign languages on the Tube; stopping people with HIV coming into the country; and admiring Vladimir Putin.

Throughout, the Brexit Party leader said: ‘Here we are talking about one of the biggest changes that’s ever occurred in politics and you’re not even interested.

‘What’s wrong with the BBC?

‘I’ve been going round the country speaking at packed rallies every night and do you know who’s not there? The BBC. and from this line of questioning I can see why. You’re just not interested are you?

‘This is ludicrous. This is absolutely ludicrous.

‘I’ve never in my life seen a more ridiculous interview than this.

‘I think you’re all in for a bigger surprise on Thursday week than you can even imagine.’

The ill-tempered interview came as two polls showed the Brexit Party on course for a thumping win at the European elections on May 24 – and one even put Farage’s team ahead of the Tories in a theoretical General Election.

Mr Farage said this morning the country had been ‘betrayed’ by both Tory and Labour politicians.

Arguing the only way now to deliver the ‘democratic will of the people’ was to leave on WTO terms – a no deal Brexit – he claimed the EU leaders would soon be ‘banging our door down to have a sensible tariff free deal’ afterwards, and dismissed potential economic fallout as ‘short term disruption’ akin to moving house. 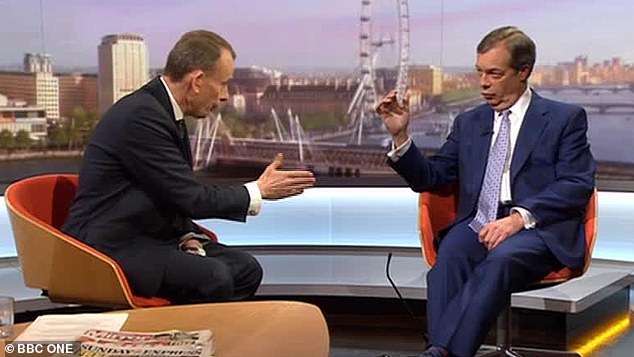 Mr Farage said: ‘This is our chance to break free of failing political project, to open ourselves up to the rest of the world, to get some self-confidence back in who we are as a country.

‘And the problem is this: the country very clearly wants us to stand up and be who we are.

‘Our political class do not believe in Britain. they simply don’t think we’re good enough to run our own affairs.’

He also insisted that should the Brexit Party win the European elections as they are widely predicted to do he would insist on its new MEPs being included in the government’s Brexit negotiating team, to ‘knock some sense into them’. 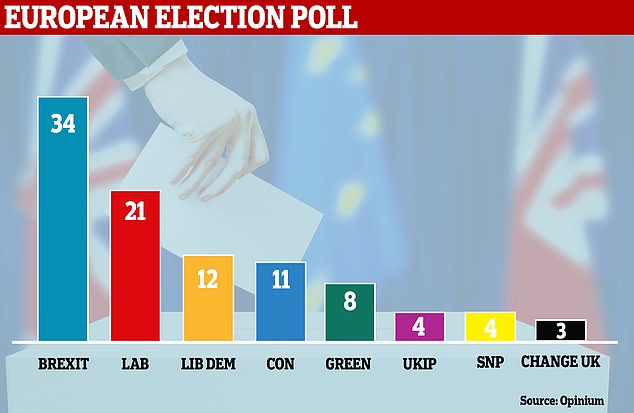 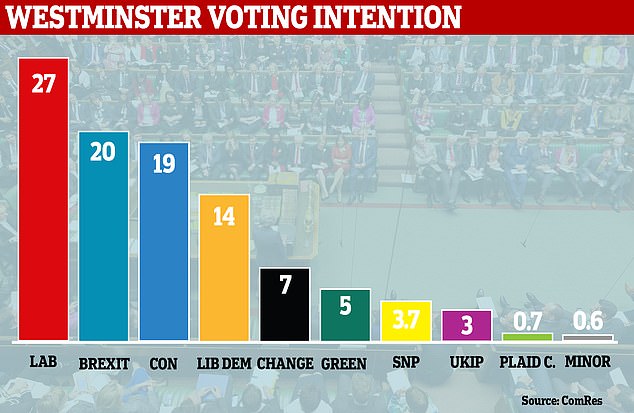 A separate poll put Labour on 27% for a General Election, followed by the Brexit Party on 20% – ahead of the Tories by 1%

Asked why in 2016 he did not advocate no deal, Brexit Party leader Nigel Farage said it was ‘because it was obvious that we could do a free trade deal’.

He told Andrew Marr: ‘The problem is the Prime Minister never asked for it so we finished up in the mess that we’re in.’

He added: ‘She chose to go for this close and special partnership. Basically right from the start she was happy for us to be kept very close to the customs union. So where we are now, the only way the democratic will of the people can be delivered is to leave on a WTO deal.’

He went on: ‘In the referendum itself, I was the one that coined the phrase no deal is better than a bad deal.’

The Prime Minister, he argued, ‘has wilfully deceived us’, adding: ‘What she’s put to Parliament three times isn’t a deal, it’s a new European Treaty. I didn’t spend 25 years campaigning to leave the EU to sign up to a new treaty.’ 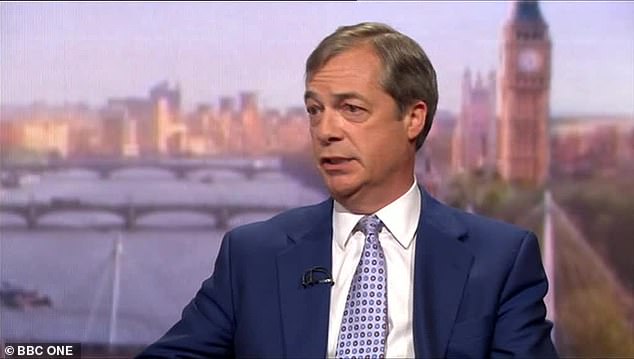 ‘I didn’t spend 25 years campaigning to leave the EU to sign up to a new treaty’, Mr Farage said

An Opinium poll in the Observer today found the Brexit Party will hoover up 34 per cent of the vote in the european elections, and put Labour on 21 per cent and the Tories in a miserable fourth place with 11 per cent

An even more extraordinary poll in the Sunday Telegraph said for the first time the Brexit Party would beat the Tories in a General Election.

The ComRes survey of voting intentions put Brexit on 21 per cent to the Conservatives’ 20, which would see Farage’s team win 49 seats, becoming the UK’s second biggest party.

This morning in an interview with Sunday Telegraph the former leader of UKIP said: ‘What I’m hearing is that they’re coming pretty close, the Cabinet, to agreeing some form of second referendum.

‘I’ll tell you what, if that’s really what they decide to do, then the Brexit Party will replace the Conservative Party. And I mean it.’

He added: ‘They’ve been going 200 years and people could say, ‘Nigel you’re just talking moonshine here’, but I genuinely think if ever there was a moment, like 1921, where the liberals… just disappear, we are at a moment in which that could happen to the Conservative Party as we currently know it.’

The Tory Party currently has around 124,000 members, but people have been signing up to the Brexit Party n their thousands since its launch.

Mr Farage told the paper: ‘I would think by the end of this campaign we’ll be a lot bigger than the Conservative Party.’